Caitlyn Jenner, Who Voted For Donald Trump, Is Furious At Trump For Dismissing Transgendered People

On Sunday, the New York Times reported that the Trump administration is “considering narrowly defining gender as a biological, immutable condition determined by genitalia at birth.”

According to a memo obtained by the publication, the Department of Health and Human Services is looking to establish a “legal definition of sex” under Title IX, the act which bans gender discrimination in any education program that receives Federal financial assistance.

This news has sparked outrage across the country, with many activists protesting the Trump administration in Washington, D.C. and on social media. 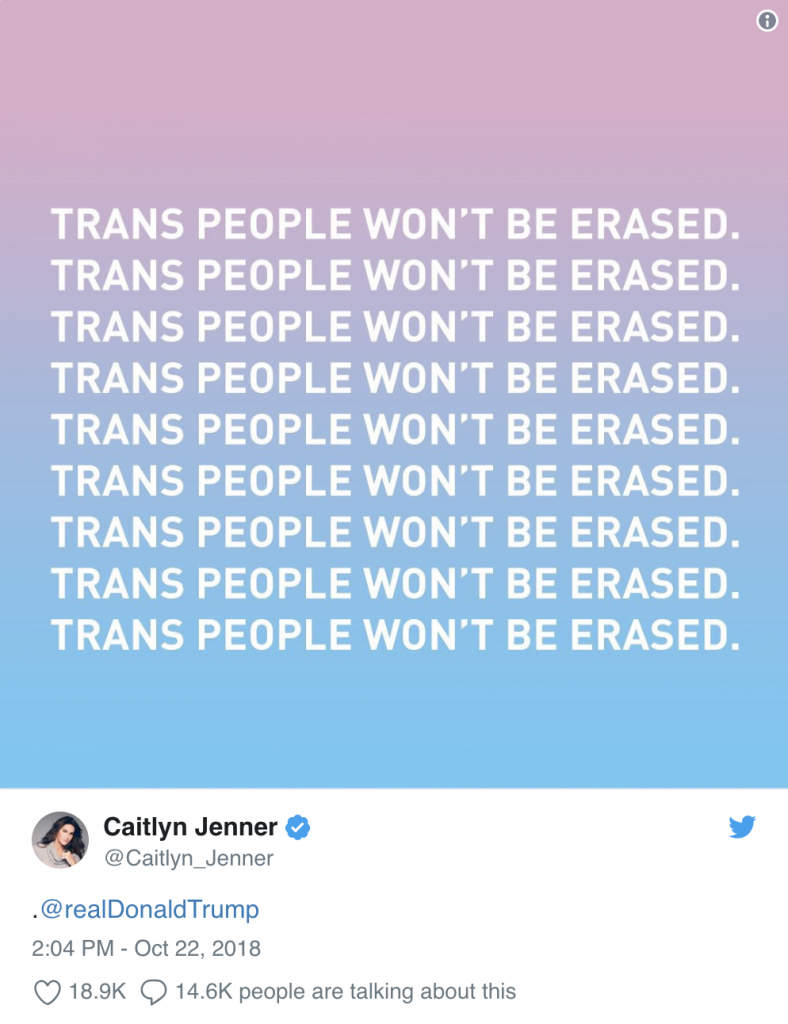 Jenner, who voted for Trump, has been outspoken about what a disappointment he has been on LGBTQ rights. But her past support for him came up in a lot of the Twitter responses:

You and your family voted for him and still support him. As they say – elections have consequences. #VeteransAgainstTrump#VoteBlueToSaveAmerica pic.twitter.com/nHFBFCi9XT

YOU VOTED FOR HIM!
STFU

Your support for him won't be erased.

Amazing how it didn’t matter until your interests were shit on!

You supported him when you thought you'd be safe, even though you already knew that MANY other people – specially the immigrants – wouldn't. So now it's too late for you to complain and take back what you've said before.

Despite her changed feelings towards Trump, Jenner is hopeful she can make an impact by being on the Republican side.

Jenner explained to Variety that she regularly makes trips to Washington, D.C. and has had long meetings with roughly 50 members of the House and Senate and many members of Trump’s White House directly.

I think it’s a good thing that I’m on the Republican side because I’ve got an in,” she said. “Has this administration set us backwards? Absolutely. And every time they’ve done it, I’ve fought it. …. I fight those types of wars. I fight the equality wars. I do it all very quietly. We’re going to be okay in the end.”

She added: “What’s going on in Washington D.C. is just disgraceful. The hate, the media, all the things that are going on there. … [Trump’s] not been doing a very good job, but it’s not over yet.”

Steve Mnuchin Gets Shamed and Humiliated by His Own Wife, ‘I Stand With Greta Thunberg’