REPORT: Some Obama Voters Who Voted for Trump are Beginning to Withdraw Support

Back in 2016, Donald managed to eke out an Electoral College victory over Hillary Clinton by siphoning off some voters who had supported Barack Obama in 2008 and 2012.

As the country heads into the 2020 election, that key demographic appears to be souring on Trump, according to a new survey by the Democracy Fund’s Voter Study Group.

The poll of 6,779 Americans found that while most people’s opinions of Trump have remained unchanged since 2016, “only Obama-Trump voters have had a significant change in their view of President Trump over the last two years.”

The poll has a margin of error of 1.8 percentage points.

New research suggests that since 2016, Trump has lost ground with Obama-Trump voters and gained ground with Never-Trumpers… https://t.co/93YxI1CjLY pic.twitter.com/L1nwEPNzFw

“While a majority of Obama-Trump voters still have a favorable opinion of the president, no other voting group has shifted away from the president more in the last two years.”

That support has eroded down 19 percentage points to 66 percent. Though they only make up five percent of the electorate, Obama-Trump voters are “disproportionately white, and non-college educated,” and “likely to be well distributed geographically for the purpose of electoral impact,” the survey’s author and Voter Study Fund research director, Robert Griffin, wrote. 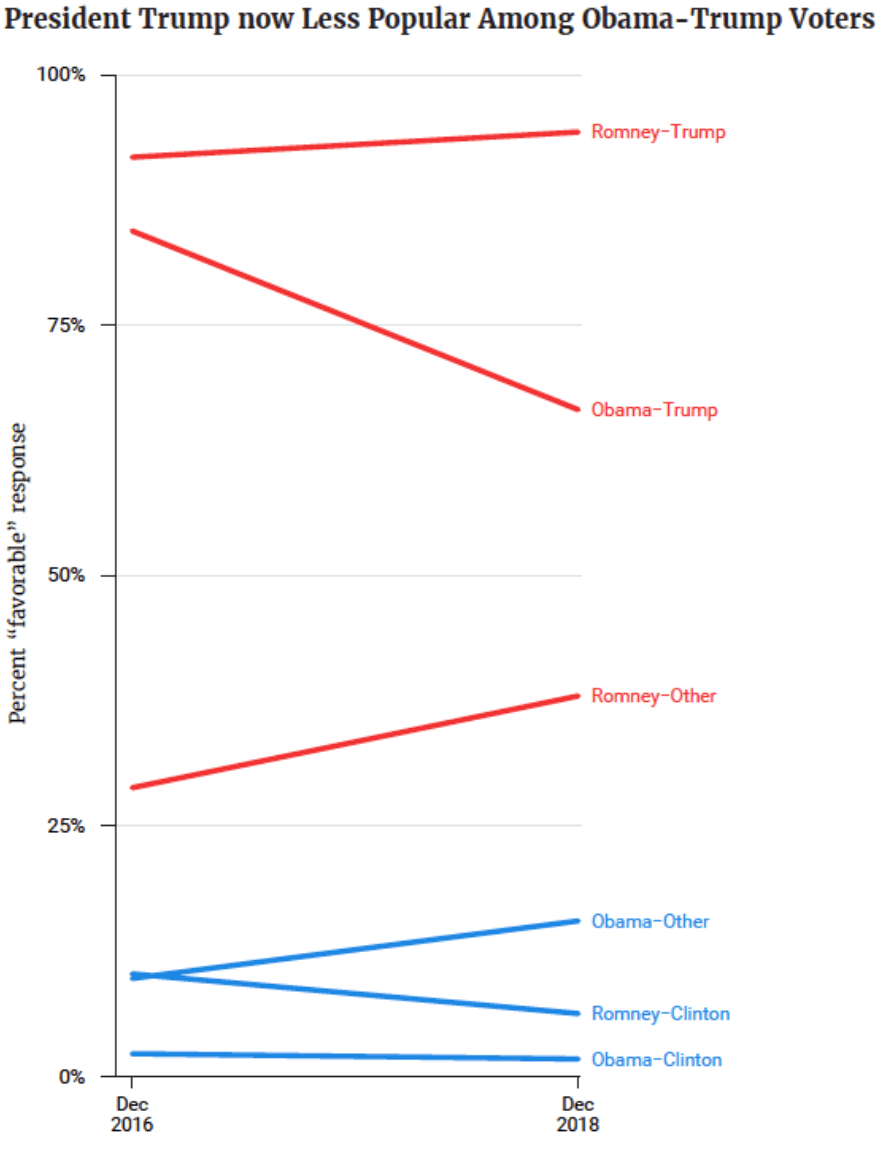 This could swing the election back to the Democrats if white blue-collar voters – particularly in the rust belt states of Pennsylvania, Ohio, Michigan, and Wisconsin – abandon Trump. Those four states combined carry a hefty 64 Electoral College votes.

Trump is exhausting us. This is different than Clinton where he benefited from impeachment proceedings that seemed to be a political exaggeration. If Trump is impeached, while not the biggest issue for average middle class voter, most won’t say it’s unfair and pointless.

They have come yo their senses, @realDonaldTrump is bad for America.

As they should… if you voted for Obama… its no way in hell you can keep listening to lie after lie… #PsychoDonTrump has no integrity or dignity for himself or anyone else. GutterTrump is a very poor representative of America, he's no better than that BernieMadoff con guy.

Of course ! It was hilllary who made them vote trump, but now they see that he hasn’t done a thing for anyone in the rust belt, so you will see them go back to voting democrat! Trump is a FAKE populist, who passed a tax bill that incentivized outsourcing

Some? Why not all? Seriously y'all, Trump is the WORST POTUS ever, and that's before we look at all the crimes and lawlessness in his corrupt administration.