Kentucky Governor Matt Bevin has been criticized for turning up at a state fair in a blazer adorned with Donald Trump’s face.

The Republican governor appeared at the Kentucky State Fair on August 17 wearing the striking blue jacket—and even met with volunteers at the Kentucky Democratic Party’s booth whilst wearing it.

“Hey Bevin. Trolling volunteers at the Kentucky Democratic Party’s booth at the State Fair? How old are you?” wrote the Louisville Democrats while sharing photos of Bevin with the jacket on Facebook.

The Louisville Metro Democratic Club also shared photos on social media of Bevin stood next to a seemingly unimpressed female volunteer at the fair. 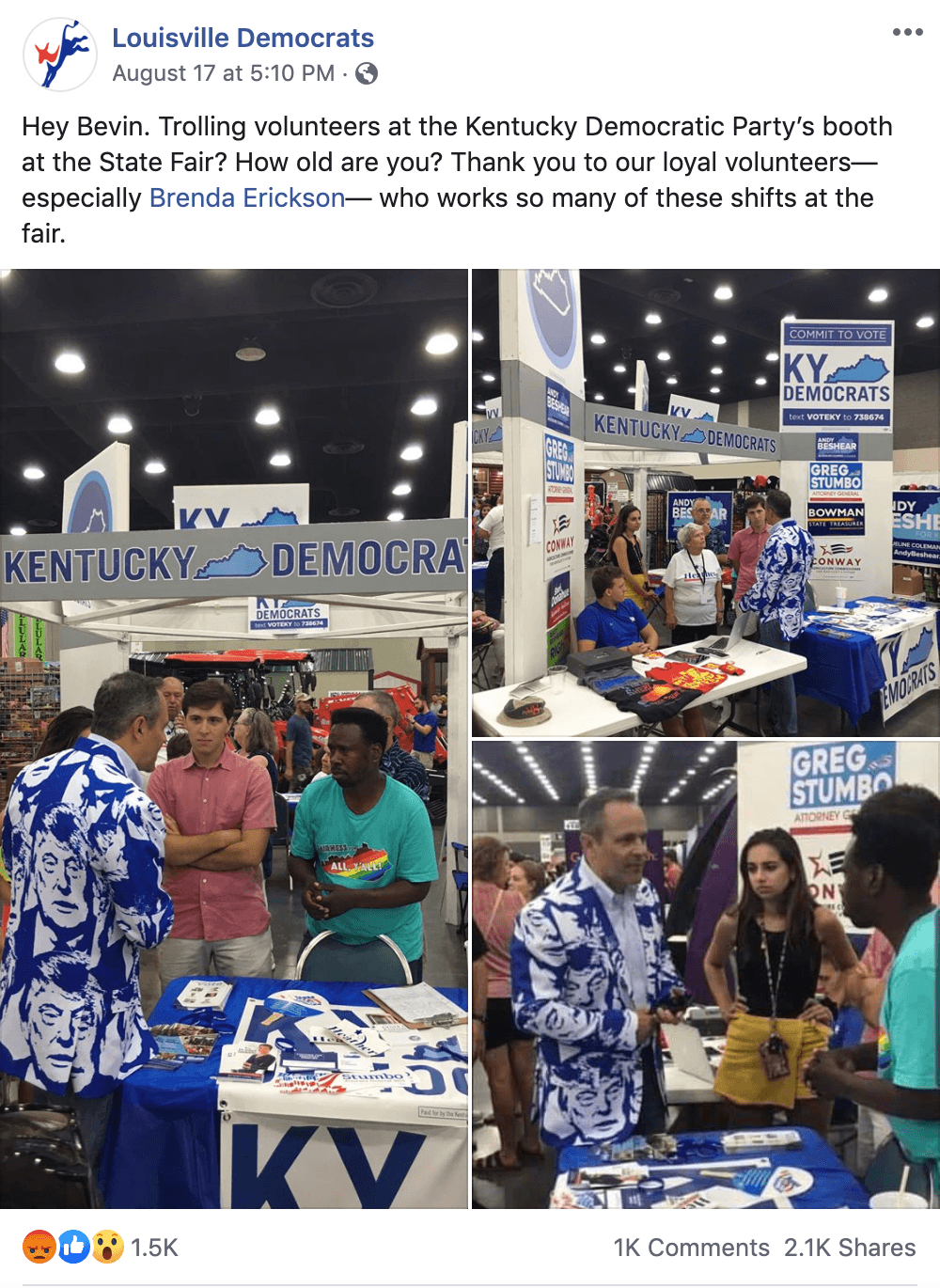 Bevin was also criticized on Twitter for his outfit.

I didn't think Matt Bevin could be any more embarrassing. Please make it stop. #Carpetbagger https://t.co/Wq7MtwjOQB

“Did anyone else see that Kentucky Governor Matt Bevin went out of his way to harass democrat volunteers at the Kentucky State Fair? This guy is a Grade A douchebag,” added Milo Kuroi.

Did anyone else see that Kentucky Governor @MattBevin went out of his way to harass democrat volunteers at the Kentucky State Fair? This guy is a Grade A douchebag. #ugliestjacketever #wontbegovformuchlonger #bevinsucks #FUBevin pic.twitter.com/Z1XBtuCfQP

Bevin previously posted a video onto social media urging people to visit the Kentucky State Fair. He was not wearing the Trump jacket during this video.

Take a look at the other responses:

With the crazy shit happening in Portland today, y’all might have missed that KY Gov. Matt Bevin harassed the Kentucky Democratic Party’s booth at the KY State Fair today looking like a complete jackass. #KYStateFair pic.twitter.com/kpNwFx5FpX

This is the governor of Kentucky Matt Bevin getting slammed at the Kentucky State Fair in the city of Louisville. this guy is more of a clown than Donald Trump is.🤔 pic.twitter.com/bGf7YOp7Fe

This is the most unpopular Governor in the country @GovMattBevin wearing a Donald Trump suit to the Kentucky State Fair.

Could Matt Bevin be any more unlikeable? pic.twitter.com/3kbYhgPhLU

@GovMattBevin “exercising” his 1st A rights at the Democratic booth at KY state fair. Wears a Trump jacket – what a fool. Bothering young volunteers – disgusting. Bevin is repugnant. pic.twitter.com/v1cspHGMtT

Honoring his supreme leader with Trump's face on his jacket.🤮🤮