The Republican National Committee on Thursday unveiled its logo for the 2020 convention in Charlotte, as the host committee kicked off a drive for 8,000 volunteers.

The announcements came as part of the first day of the RNC’s annual two-day summer meeting in Charlotte.

The meeting is taking place a little more than a year before the start of the GOP convention on Aug. 24, 2020.

Organizers expect 50,000 visitors for the convention, including 15,000 journalists from around the world. The convention will recruit more than 8,000 volunteers, all of whom will be subject to background searches.

And the new logo has the GOP elephant against a crown: 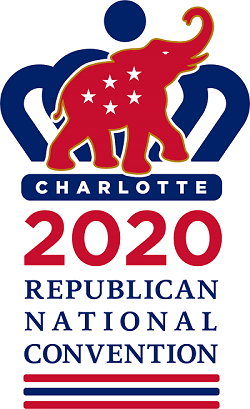 Is that a crown? Are they seriously using monarchist imagery?

There is a crown in it. WTF.

Are they officially crowning Trump as Emperor at this shindig?

That’s a crown behind the elephant. Of course the #GOP will say it’s just about #Charlotte (“the Queen City”). But an anti-democratic party celebrating its authoritarian leader is clearly going for other meanings, too.#trump #republicans #election2020https://t.co/dE4hKT1TGw

A crown, symbolizing our King.

Wow, that’s a crown, as unAmerican as it gets.

RNC is representing their convention with a crown, a symbol of the monarchy. They full-on embrace Trump dynasty. He’s not leaving y’all. The coup is complete, we are a one-party state now. https://t.co/8TDFqFvz1y

What's with the crown, RNC? Going full on monarchy in 2020? I was assuming you'd be more subtle about the whole fascist autocrat thing. https://t.co/XcvMrMo5aB