Stephanie Grisham took over as White House press secretary in August after Sarah Huckabee Sanders stepped down. Many people thought it would be a step up, after all, is it possible to have a press secretary who was worse than Sarah Sanders?

Grisham’s past contains multiple red flags, which would render her toxic as a press secretary for any other president…or any job working for a respectable organization.

The current press secretary has two DUI’s on her record — including one while she was working on Trump’s election campaign!

In 2013, she was arrested for driving under the influence, driving with an invalid license, and speeding. Although, those charges were reduced to a single reckless driving charge.

The second DUI came in 2015. She pled guilty to that DUI offense. Grisham says that the administration is aware of her past and that she “complied with all sanctions and disclosed both episodes to the White House.”

As part of that case, she had to pay nearly $1,600 in fines and fees, records show. Grisham finished paying her debt in the case on Jan. 9, 2017, less than two weeks before Trump was sworn into office. 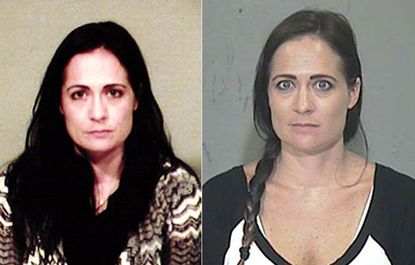 Drunken driving isn’t the only shady area in Grisham’s past, however. According to the New York Times, the current White House press secretary was let go from a job at AAA Arizona due to filing false expense reports and travel claims.

The Times notes, “Ms. Grisham lost a subsequent job after an accusation of plagiarism.”

Ms. Grisham was gone within about a year. A former AAA employee with direct knowledge of the matter said Ms. Grisham left after accusations that she filed false claims for travel and other expenses. A spokeswoman for AAA Arizona declined to discuss personnel matters.

Ms. Grisham lost a subsequent job after an accusation of plagiarism.

She had gone to work for an advertising agency in Arizona whose clients included a start-up called GarageFly, an online service that helps car owners find auto repair shops. While making a presentation to the Arizona Governor’s Office of Highway Safety, GarageFly’s founder showed off his website. In an interview, he said he was quickly informed by a furious attendee from AAA that the website included material lifted verbatim from AAA.

Since accepting her position as White House press secretary, Grisham hasn’t really had much interaction with the press. There haven’t been any press briefings at all, and she has done very little in the way of talking to reporters.

Grisham made peoples’ jaws drop last month by attacking a former Donald Trump official as “totally unequipped to handle the genius of our great President.”

The comment was prompted by former Chief of Staff John Kelly saying in an interview he regretted leaving the administration and warned Trump about hiring “yes men.”

“He just wants to come back into the action like everybody else does,” Trump told a reporter, dismissing Kelly’s comments. Then Grisham chimed in with a thought of her own about Kelly, saying “I worked with John Kelly, and he was totally unequipped to handle the genius of our great President.”

And @PressSec responds as well: “I worked with John Kelly, and he was totally unequipped to handle the genius of our great President.”

Grisham also supported Trump and agreed that any Republicans who don’t support the president are “human scum.”

White House press secretary Stephanie Grisham agrees that opponents of Donald Trump are "scum": "The people who are against him and who have been against him and working against him since the day they took office are just that. … They deserve strong language like that." pic.twitter.com/0Gkll6DZqi

And of course, the most important thing to remember is that Grisham hasn’t held one press briefing. Not even ONE. That means she has 2 more DUI arrests than press briefings. Not a good record for a press secretary.

“President Trump communicates directly with the American people more than any President in history. The fact that the White House Press Corps can no longer grandstand on TV is of no concern to us,” Grisham said to ABC News.

In previous administrations, regular press briefings have been a centerpiece of the White House communications operation by which the White House both advances their public messaging and engages in a a regular exchange of information with the media on the pressing issues of the day.

But in the Trump White House, Donald Trump has done away with the regular press briefings that became a news spectacle under his first press secretary, Sean Spicer, and became increasingly infrequent under his second press secretary, Sarah Sanders, who was the last Trump press secretary to brief in the James Brady briefing room on March 11.

A White House official said that Grisham will likely do more interviews in the months ahead but noted that she has her own style to approaching the job as press secretary, which is one of three hats she wears at the White House. Grisham also fills the role of White House communications director and continues to manage communications for first lady Melania Trump.