BUSTED: Melania Trump Lied Under Oath in 2013 About Graduating From College With a ‘Bachelor’s in Architecture’

We get a lot of mail about the fact that we frequently cover Melania Trump.

And it’s true, we do cover the First Lady a great deal.

But I do understand the complaints. Melania is not the office holder. She is not setting policy.

However, these are not normal times.

We are facing the most corrupt government in American history, and that corruption drips down to the East Wing as well.

One of the problems we have with Melania is that it appears she worked illegally when she came to the United States.

“I followed the law. I never thought to stay here without papers. I had a visa, I traveled every few months back to the country to Slovenia to stamp the visa. I came back, I applied for the green card, I applied for the citizenship later on after many years of green card. So I went by system, I went by the law. And you should do that, you should not just say let me stay here and whatever happens, happens.”

But Politico reported that a wealth of evidence—including the nude photos shoot that graced the cover of The New York Post—suggests that she was, in fact, an undocumented immigrant who worked in this country illegally.

Politico places her in the United States one year earlier than she has previously claimed, and says she may have been on a B-1 business visa, not an H-1B work visa—which means that she likely committed visa fraud and worked in the country illegally…

Of course, Trump’s illegal immigration rhetoric is largely about race and kicking brown people out of what Trump’s white voters think is a white country, not white super-models taking jobs away from other white super-models. But on the surface, at least, Donald Trump’s wife may be the exact kind of immigrant that he’s been railing against for almost 5 years.

Next, we get to the highly coveted “Einstein Visa” that Melania obtained to remain in the U.S.

Melania Trump obtained U.S. citizenship on a visa reserved for immigrants with “extraordinary ability” and “sustained national and international acclaim”, according to a report in the Washington Post.

Nicknamed the “Einstein Visa”, the EB-1 is in theory reserved for people who are highly acclaimed in their field – the government cites Pulitzer, Oscar, and Olympic winners as examples – as well as respected academic researchers and multinational executives.

Melania began applying for the visa in 2000, when she was Melania Knauss, a Slovenian model working in New York and dating Donald Trump. She was approved in 2001, one of just five people from Slovenia to win the coveted visa that year, according to the Post.

Now, in applying for the visa, she would have to detail her history, including her educational history.

It turns out that Melania has lied in the past about her education, and even lied under oath during a deposition.

First, Melania did eventually come clean about the fact that she is a college dropout. She was originally called out for lying about it during the Republican National Convention in 2016.

But according to a great find from the now defunct Racked, Melania lied under oath in 2013.

Melania was involved in a lawsuit for her failed skincare line.

UNDER OATH, Melania said she graduated with a Bachelor’s Degree in Architecture. 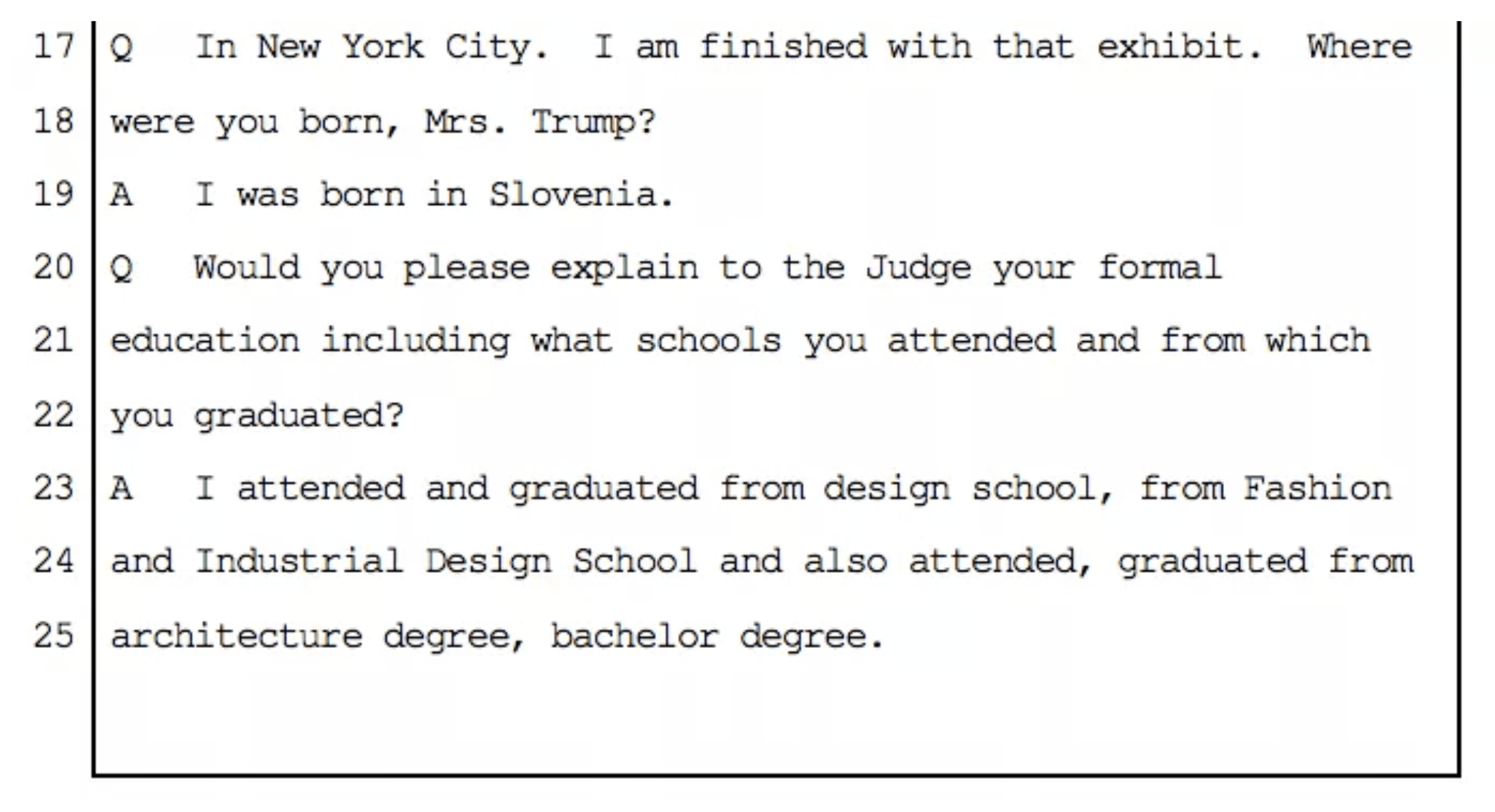 Now we must ask the question.

Did Melania lie on her immigration forms?

According to NOLO, lying to an immigration officer can have extreme consequences including permanent inadmissibility, deportability, and not being allowed to apply for U.S. citizenship.

If Melania did indeed lie on her forms and/or interview, that is a crime, and Melania should not be given American citizenship. Furthermore, through the chain migration her husband so vehemently hates, Melania’s parents and sister also became U.S. citizens.