Donald Trump’s hair is an absolute mess. We’ve written about it extensively.

Trump’s unique, forward-sweeping hairstyle has long been an object of derision and speculation, prompting theories that he uses hair plugs, a toupee, or even a $60,000 weave.

Regardless of what Trump has had done, on Thursday night Trump’s hair was looking like a big ol’ hot mess.

#dirtyDonald's bald spot on the side of his scalp was horrific at his town hall. His advance man and make-up artist will hear about it. pic.twitter.com/z5vPmza3m0

Before long, Twitter was abuzz with Trump’s mess of a mop.

Noel Casler, a former employee on Trump’s Celebrity Apprentice, was one of the first people call out Trump’s hair.

This pic is from Trump’s town hall today-is that some kind of medical device on the side of his head? Not joking. @realDonaldTrump pic.twitter.com/BY4QNqT8ZV

Others also caught on:

#TrumpTownHall shocking that @realDonaldTrump handlers & those preparing him prior to going on TV didn't say "you have a bald spot showing go fix your hair!" Can you imagine how pissed he's gonna be when he sees this show later & sees his hair! pic.twitter.com/xKK7vPr79z

That side bald spot of @realDonaldTrump keeps poking through. Not enough Auquanet on the comb over tonight, Donnie boy. https://t.co/eKbRB3G4nH

And Trump has had this same bald spot before. Take a look at these photos, the first one of Trump was from 2015, shortly after he announced his bid for the presidency:

In researching Trump’s hair, it doesn’t appear to be a toupee. Because if it was a toupee it would be thicker and would look better.

In a 2011 profile in Rolling Stone, Trump actually revealed the supposed secret behind the hair that’s mystified America for years:

OK, what I do is, wash it with Head and Shoulders. I don’t dry it, though. I let it dry by itself. It takes about an hour. Then I read papers and things.

…I then comb my hair. Yes, I do use a comb. …Do I comb it forward? No, I don’t comb it forward. I actually don’t have a bad hairline. When you think about it, it’s not bad. I mean, I get a lot of credit for comb-overs. But it’s not really a comb-over. It’s sort of a little bit forward and back. I’ve combed it the same way for years. Same thing, every time.

Ignoring the fact that an hour seems like an excessive amount of time for Trump’s thin, relatively short strands to dry post-shower, this all sounds believable enough.

Still, it doesn’t fully explain the cotton candy hairspray labyrinth that has fascinated so many Americans. In the picture below, for instance, you’ll notice a sporadically arranged hairline that seems to be hanging on for dear life. And then there’s that flap. 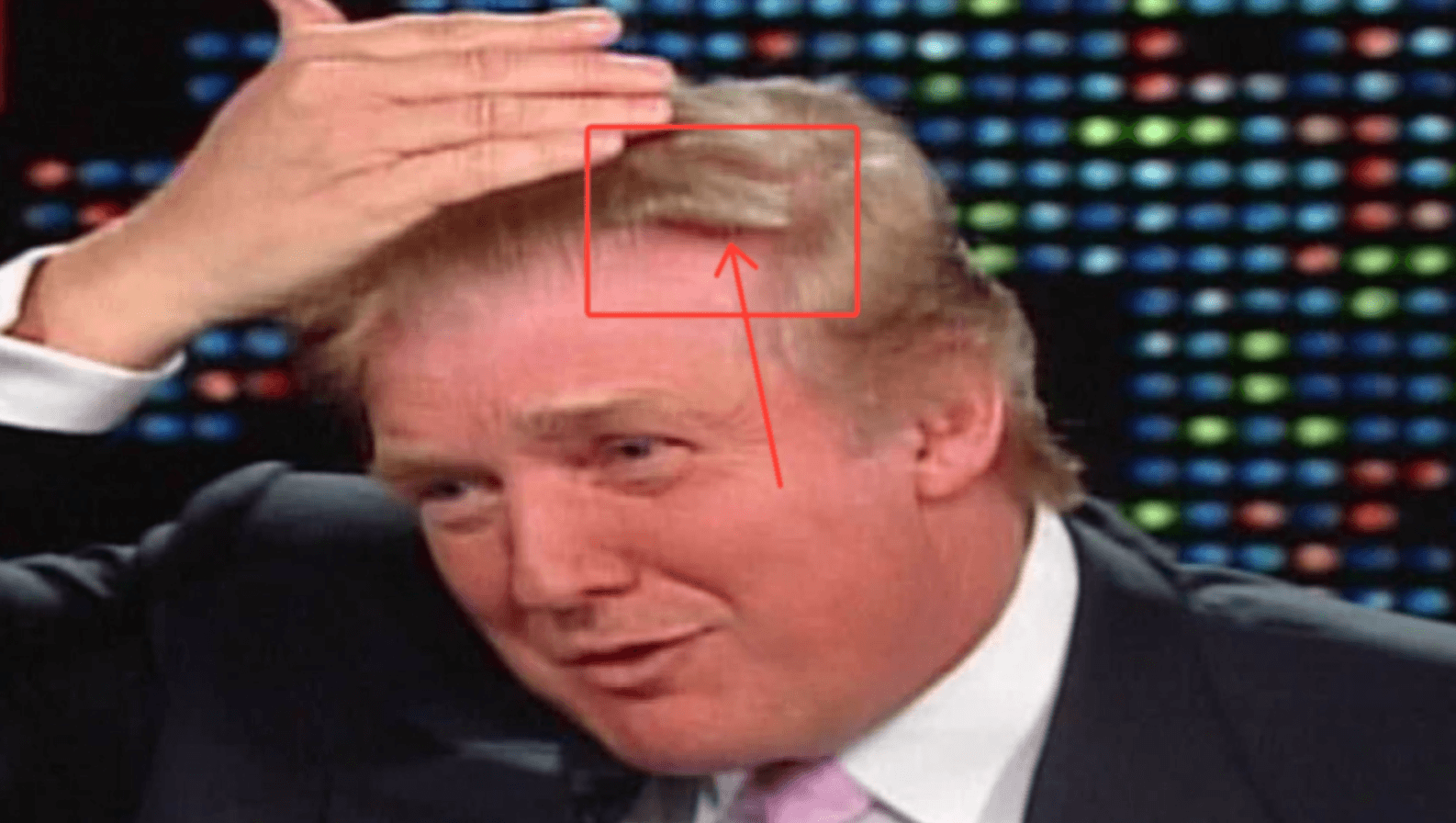 How is that section of hair so thick compared to the hair around it? And where, exactly, does the hairline start?

And then there’s this: 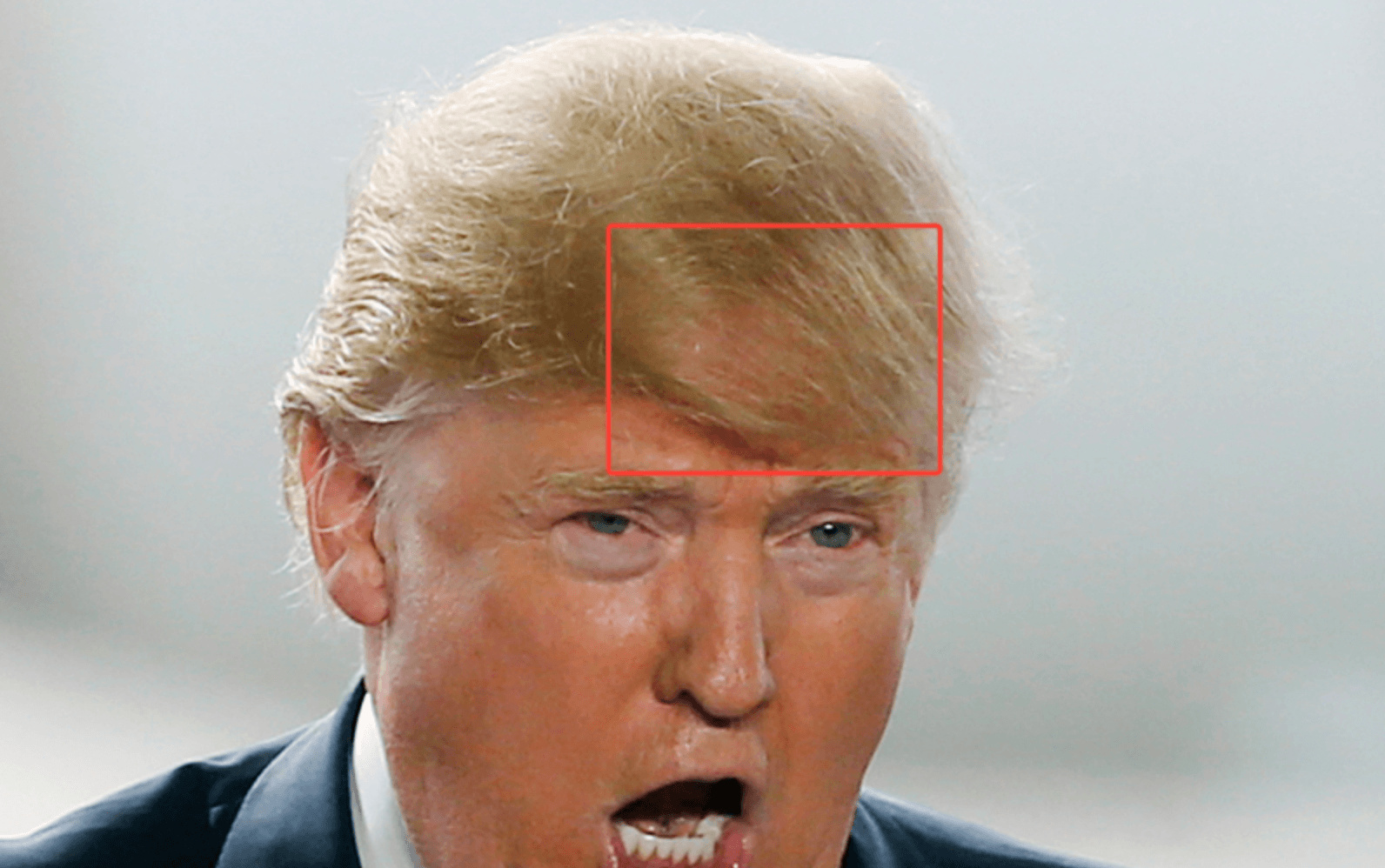 How can one possibly comb natural, human hair so that it lies comfortably in such a shape? Hair that grows naturally from a head will not—cannot—form the web we see laid bare in the thinning section of scalp curtain above. (I am actually staring at my own hair as I write this, and I’m telling you, I cannot figure out how Trump does this.)

Adding to the question of the provenance of Trump’s hair is its motion, or lack thereof. Natural hair, even when heavily doused in product, does not move as if it exists apart from the scalp itself. And yet, that is precisely what we see with Trump’s candy-colored head rug. Notice how it flaps as one in the breeze.

Now take a look at what happened in 2015 when Time interviewed Donald Trump as part of its Person of the Year lineup. Naturally, Time decided to present Trump with a bald eagle named Uncle Sam. But in an act of performance art that was, truthfully, a bit too on-the-nose for my tastes, the living symbol of American pride attacked the angry orange candidate. And as Uncle Sam’s wings flapped frantically, Trump’s hair piece migrated. It was ever so slight and ever so brief, but migrate it did. And in one impossibly solid piece.

You’ll notice that as it’s being sideswiped by the powerful wing of Uncle Sam, Trump’s meticulously arranged pile of hair moves as though it were a single entity. Or, perhaps, as though it were woven together.

Unfortunately, none of this amounts to more than hearsay or speculation, since no one has gotten close enough to truly inspect his scalp. But it was reporter Ashley Feinberg who spotted video footage of the president that may give us answers, once and for all.

this is from a reuters photo…. folks, i think it's real pic.twitter.com/Q1790j9C6C

if someone were to have a scalp reduction scar, it would be here pic.twitter.com/Q8OKMT26P3

This 20-second clip captures Trump from behind as he boarded Air Force One in February 2018. As he’s halfway up the stairs, a gust of wind catches him just right and peels away a flap of golden strands to reveal his elusive bald spot, finally laid bare for the world to see!

From the look of it, Ivanka’s explanation from Michael Wolff’s Fire and Fury is spot on.

“Ivanka often described the mechanics behind it to friends,” Wolff writes, “an absolutely clean pate—a contained island after scalp-reduction ­surgery—surrounded by a furry circle of hair around the sides and front, from which all ends are drawn up to meet in the center and then swept back and secured by a stiffening spray.”

Watch as Arizona Gov. Ducey Silences Call From Trump Just as He is Certifying Election Results

REPORT: Trump Beginning to Fear Life Without Presidential Power, ‘Are They Gonna Try and F*ck With Me?’