A SpaceX rocket is scheduled to send NASA astronauts into outer space on Wednesday afternoon and Donald Trump will be there, ready to turn the event into a campaign rally, and he brought most of his family with him as well.

The return of an American-made rocket carrying an American-made space vehicle into the heavens already is giving the president and his top lieutenants fodder to hammer former President Barack Obama and his administration.

“What has happened is, in contrast to 2011, when President Obama took us out of the space launch business, that ended our leadership in space launch. Now we’re going to get it back,” Commerce Secretary Wilbur Ross told Fox Business on Wednesday morning.

The White House already is in celebratory mode, a festival of back-slapping scheduled to culminate not with the 4:33 p.m. launch of SpaceX’s Demonstration Mission 2 rocket, but with a Trump speech about 90 minutes later at the Kennedy Space Center in Florida.

“This is the first time since then that American rockets, American astronauts to the American space station. And that’s really important,” Ross said, uttering the day’s first bravado-fueled false statement: The International Space State is not an “American” platform. Rather it is a joint effort by the US, Canadian, European, Japanese and Russian space agencies.

Trump recently claimed he has “reinvigorated” the U.S. space program and NASA. He frequently claims to have done so with all kinds of things, from the military to the health care system, and most recently, testing and ventilators to detect and treat coronavirus.

But expect Trump again on Wednesday to take credit for the launch. After all, he recently claimed NASA — despite it working for almost a decade to help design and build the SpaceX vehicles and get its two astronauts ready “was dead as a door nail, but now it’s very much alive.”

Expect Trump to hammer Obama for shutting down the Space Shuttle program. But Trump’s expected boasts and attacks won’t tell the entire story.

SpaceX and NASA inked an agreement way back in 2014 for six missions beyond the Demo-2 flight. Obama was the commander-in-chief at that time, and Trump was only talking privately with friends and advisers about a presidential run. And in 2011, during Obama’s first term, the two entities signed a $3 billion deal to design the Dragon spacecraft that will be launched on Wednesday.

According to CNN’s Kate Bennett, Trump made this taxpayer-funded trip a family affair, bringing along daughter Ivanka and husband Jared, their children, as well as Eric Trump.

. @IvankaTrump and Jared Kushner flew down to FL aboard AF1 for the launch, accompanied by two of their children. @EricTrump as well. 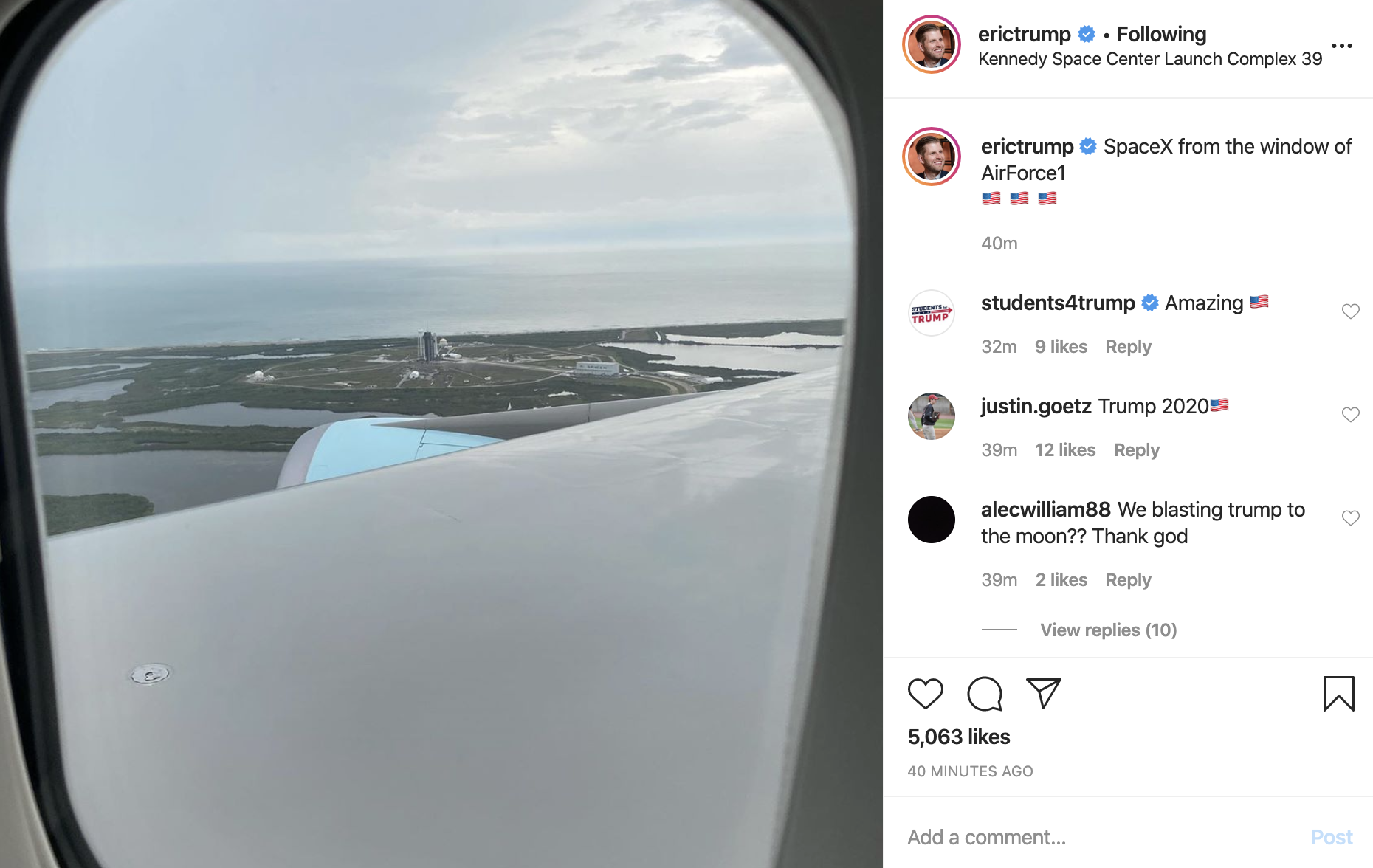 Twitter is furious that the American taxpayer is fronting the cost of this Trump family sightseeing trip:

Family sightseeing on the govt dime