After spending most of her father’s time in office at Georgetown Law School, Tiffany Trump is now a graduate, and we are presuming will take the Bar exam once that is allowed in our new socially distanced world.

Her boyfriend, Michael Boulos, congratulated “Tiffy” on Instagram, saying “after all the hard work and sleepless nights, you more than deserve it,” People reports.

After three years at Georgetown, Trump’s only child from his marriage to Marla Maples received her degree virtually on Saturday after the traditional graduation ceremony was canceled due to the pandemic.

It’s not clear whether Tiffany—whose aunt, Maryanne Barry Trump, is a retired federal judge—has a role lined up in either the Trump Organization or the federal government, Vanity Fair reports. In 2016, she said she was applying to law school so she could bring a different kind of “skill set” to the company. 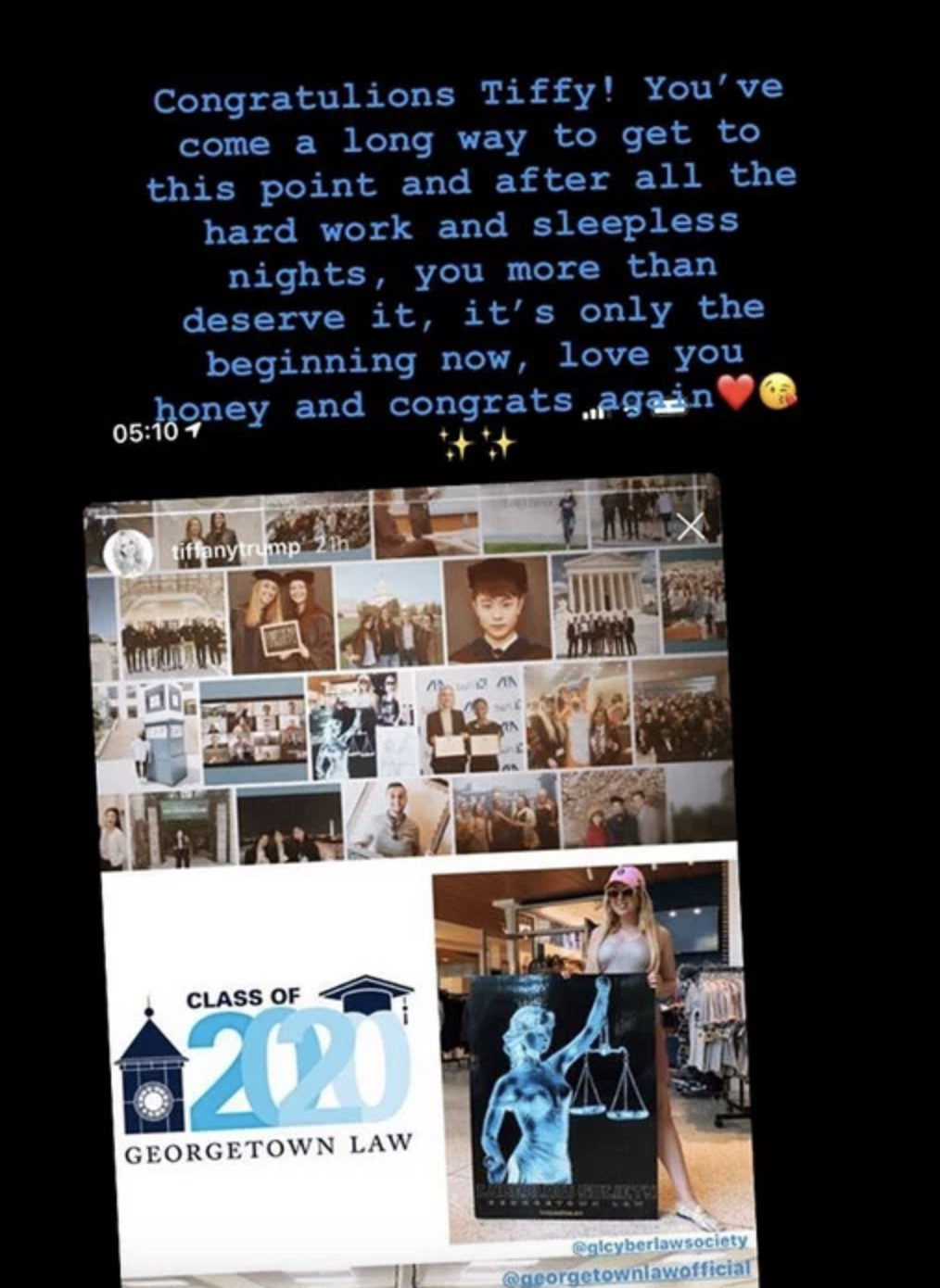 But as noted by CNN’s Kate Bennett, nobody from the Trump family congratulated Tiffany on her achievement. Now of course, they could’ve done it privately. But these are the Trumps. They don’t do something unless it’s in public and they can get some head pats.

Tiffany Trump graduated from @GeorgetownLaw over the weekend. So far, no public acknowledgement of her academic achievement from @realDonaldTrump, @FLOTUS or other Trump family members.

Now Tiffany and her father don’t seem to be particularly close.

According to Politico, Madeleine Westerhout, who left her White House job suddenly in 2019 as Donald Trump’s personal assistant, was fired after bragging to reporters that she had a better relationship with Trump than his own daughters, Ivanka and Tiffany Trump, and that the president did not like being in pictures with Tiffany because he perceived her as overweight.

Still, Trump tweets sometimes a hundred times a day, and yet not one tweet about his daughter graduating law school, which is quite the achievement?

There is nothing from Don Jr, or Eric, or Ivanka. Nothing from Melania “Be Best” Trump either.

Have you noticed with all of today's tweets from Donald Trump, there has not been a one tweet congratulating his daughter Tiffany Trump Graduates as she graduated from Georgetown Law School today????

I wonder if @realdonaldtrump even knows (or cares) that his daughter Tiffany just graduated from law school?

@realDonaldTrump I heard your daughter Tiffany graduated from Law school ! Congrats Tiffany @TiffanyATrump sorry your Dad decided not to recognize such an accomplishment #bebestmyass

Trump did finally wish Tiffany congratulations on Tuesday, a day after this post was written:

Congratulations to my daughter, Tiffany, on graduating from Georgetown Law. Great student, great school. Just what I need is a lawyer in the family. Proud of you Tiff!