A brouhaha has broken out between Georgia Democrat Jon Ossoff and his political opponent, Republican Sen. David Perdue, whose campaign released a digital ad that appeared to make Ossoff’s nose appear larger in a fundraising appeal, and Ossoff is understandably unhappy, calling the ad anti-Semitic. He’s suggesting that Perdue should donate any funds raised by the now-revoked ad to groups promoting tolerance, Politico reports.

The ad reported on by The Forward featured images of Ossoff and Senate Minority Leader Chuck Schumer, who are both Jewish. It claimed Democrats are trying to “buy Georgia” and included a fundraising link to Perdue’s campaign. As can be expected, Perdue’s campaign team is making excuses, saying the ad was created by an outside vendor and the image appears distorted due to the photo being resized and filtered. Perdue’s campaign has since removed the ad from circulation.

I don’t know, maybe this is some kind of a goof, but Ossoff’s nose is so pronounced you’d have to be stupid not to notice it. It’s quite evident. 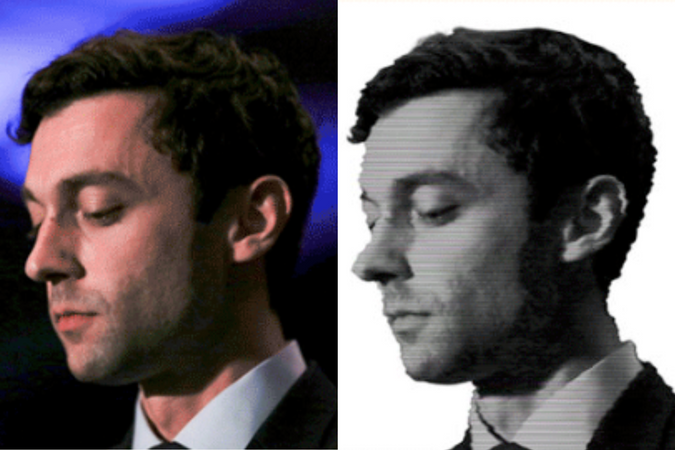 In a previously scheduled video press conference, Ossoff had a few sharp words for Perdue, and called the ad “offensive and shocking.” He suggested Perdue should apologize and donate the funds to groups dedicated to promoting tolerance.

“This was an ad that was seen by thousands of Georgians. It was a fundraising ad,” Ossoff said. “I call upon Sen. Perdue to take the money that he raised, using his manipulated image of my face and donate that money to groups that promote community healing and community unity and tolerance. Because after these last four years, that’s what we need here in this country now as much as ever.”

Indeed, as the ongoing protests in Portland and across the U.S. demonstrate, tensions are high and Ossoff is correct.

So far, Perdue’s campaign team hasn’t responded to the call to donate funds, but in an original statement, Monday did claim that Ossoff’s nose was inadvertently enlarged by a vendor and that Perdue himself hadn’t seen the ad. It’s unclear whether his campaign will sever ties with that vendor.

Casey Black, a spokesperson for Perdue, claimed that the mistake happened when the vendor added a filter to the resized photo, causing an “unintentional error.” She said the ad was “immediately” removed from Facebook and added:

“Anybody who implies that this was anything other than an inadvertent error is intentionally misrepresenting Sen. Perdue’s strong and consistent record of standing firmly against anti-Semitism, and all forms of hate,” she said.

The race between Ossoff and Perdue is a hot one where tens of millions of dollars in outside spending may alter the balance of power in the Senate next year, and Ossoff, in a statement issued Monday, called the enlarging of his nose one of “the oldest, most obvious, least original anti-Semitic tropes in history.” And some of his Democratic allies have echoed their condemnation as well.

Some, like Nikema Williams, chair of Georgia’s Democratic Party have called for Perdue to apologize and fire the vendor who produced the ad. And a spokesperson for the Democratic Senatorial Campaign Committee also had criticism for Perdue, saying he was refusing to take responsibility for the ad. Ossoff’s campaign topped the situation off by sharing statements from the Anti-Defamation League and from the leader of the local chapter of the American Jewish Committee to condemn the ad.

One has to wonder what this says about Sen. Perdue if he doesn’t condemn the ad and fire the vendor responsible, whether it was a mistake or not. While this ad may not be a big thing, it’s worrisome since fascism is obviously on the rise in the U.S. It isn’t surprising that Ossoff is upset by this because the tide is turning in the U.S., helped along by the supporters of President Donald Trump, and this is far from a good thing.