It is not the most important news of the day, indeed it isn’t even really news, but sometimes this bizarre stuff helps us moderate some news that throws us into rages or tears.

We are most certainly taking a ride into Bizarro-world, in which “brand-clueless” Liberty University President Jerry Falwell Jr. did what all university presidents do when going on vacation and getting drunk on a yacht with a woman much younger than them, take a picture in a state of half-undress and post it to their Instagram page! Not to make too fine a point here, but as we reported yesterday, this is the type of thing that would likely get the president of the University of Minnesota fired, never mind the president of Liberty University.

Ah, yes – Liberty University, a private school with no qualms about policing your private Christian life, should you choose to go there. Never mind that any university president would have some explaining to do, but this particular one is president of a university that enjoys policing morals. 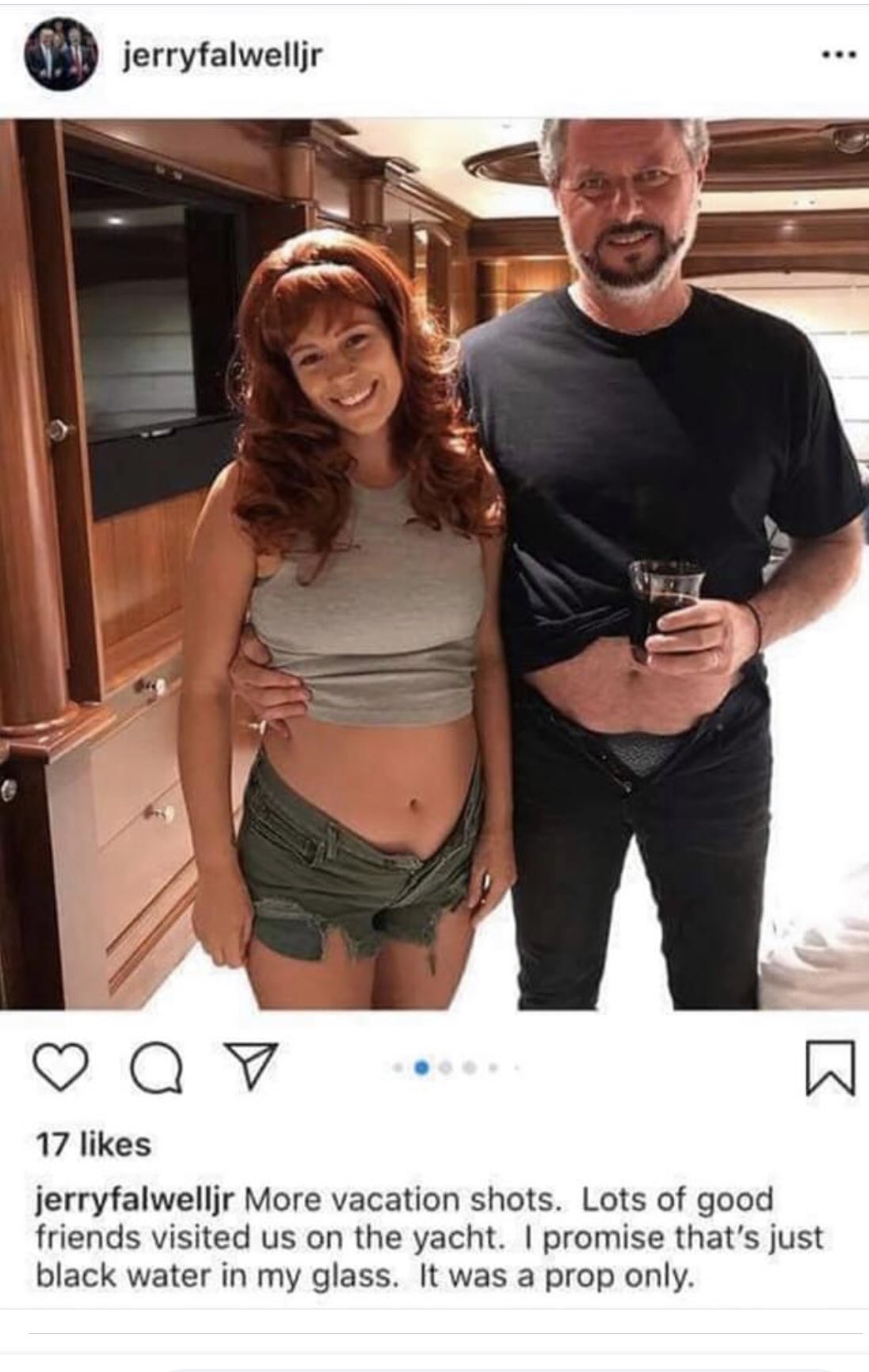 It was for that very reason – probably – that a Liberty University student took to Twitter to take “President Falwell” to task for … going on vacation on a yacht, getting drunk with some scantily clad young woman and .. take it from there:

The impulse is to laugh in disgust/horror at the photo.

But it should actively anger you on behalf of the students who have faced significant consequences on campus for the *same* actions.

We also have a pretty good indication where that money for yachts and … young women, come from:

Drinking? Smoking? Possession of cigarettes/alcohol? Against the rules regardless of age. Could result in a “$300 fine, 30 hours community service, and/or expulsion.”

Real people who could not afford the fines have been fined for this. Real people were kicked out for this. pic.twitter.com/1yjBxnIyFH

Sounds like a racket, except kids aren’t taken by surprise. But that’s not the only fine to be derived here:

Oh and unbuttoning your pants? Could cost you $150 and/or 15 hours or community service for being in “any state of undress with a member or the opposite sex.” pic.twitter.com/ScuYAyx7M5

To be fair, again, we do want to point out that one could walk on the campus of UC Santa Cruz and get fined for walking around with your pants undone. One would be better off – FAR better off – simply insisting you have the right to come to class naked, as some have, than to assert a right to walk around with one’s pants undone. So that’s not necessarily a “Liberty University” thing – though the sexism and misogyny certainly is.

Is this linked with Trumpism? Is that something practiced at Liberty? Yes, says our fearless Christian warrior, indeed she notes it’s perhaps the principle reason people go to Liberty (nowadays) and has to have a separate thread to discuss “other reasons” people go:

1. Structural disadvantages play a major role for many students. Finances form the basis for most young adults' college choices. It doesn't matter if you get into your dream school if you fiscally can't afford to attend. For many, any college degree is better than none.

Coming face to face with some of the more extreme strains of conservatism can make folks more conservative.

The flip side is that it also tends to distance a good portion of students from that particular brand of conservatism.

And nothing says “Trumpism” more than rank hypocrisy:

If you place Jerry in a vacuum, I don’t give a *whole hoot* what he does in his free time.

But policies backed by Jerry, signed off by Jerry, reflected on by Jerry, are hurting real young people while Jerry gets to claim religious political persecution on a yacht. Gross.

We think that young Alexandra will do quite well in the upcoming Liberty University debate versus President Falwell, but because we can’t have large crowds gathered during the time of COVID, maybe they can hold it on a yacht? Nah, she’s not getting on that boat with that creep, and that’s sorta the point.

Former CIA Dir. Brennan: ‘What is Known About Trump-Russia Still Doesn’t Get CLOSE to Reality’

Three Americans are in a Bigger Panic than Trump: Don Jr., Ivanka, and Eric, Who Face the Nightmare of Their Future

Don Jr. Has a Panic Attack on Fox News as He Tries to Explain Why His Father Only Pays $750 in Taxes