Trump Get Booed as He Arrives at Golf Course, Faces Protest Signs Mocking His Cognitive Ability

The country is on the edge of the cliff above the abyss because all unemployment benefits passed due to COVID expire this week. The only reason that we had some semblance of normalcy over the last few months is due to the fact that the government helped those people who have lost work during the pandemic.

Now, with unemployment benefits expiring, people are about to go hungry, get kicked out of homes and apartments, and an economy that just had its worst quarter ever will get unbearably worse. It will get desperate.

So did Trump order Schumer, Pelosi, McConnell, McCarthy, Mnuchin, and Meadows over to the White House this weekend in order to hammer things out and keep the nation together? Like a real president? One would think that since Trump is the one with the most to lose if the country goes to total hell over the next three months, pure self-preservation ought to motivate a president.

But this is where sheer incompetence steps in, Trump doesn’t realize that he has the power and the duty to bang heads together in the White House over a Saturday and Sunday to get a deal done for Monday morning. It is one thing to live in a dictatorship, it’s quite another to live in a totally incompetent one! Ask Cuba!

Of course, COVID is killing more per day now throughout the country than any point except for the worst week in New York. There’s also a hurricane bearing down on the east coast of Florida that someone might want to watch. But that’s for adults.

So what does Trump do? You already know the answer:

On average, coronavirus kills 930 people per day in the United States. A game of golf is 18 holes.

155 Americans will die by the time the president is done playing today. pic.twitter.com/SkaLKhZAME

Of course, he is. What could he possibly do?

I think Trump’s physical therapist told him to get some exercise for his right sided stroke and golf is the only exercise Trump knows other than tweeting and rage pooping.

Yes, it is what a psychopath does.

Other than the TikTok take, that is exactly right. There are legitimate concerns about TikTok’s security apparatus and spyware.

Also studying his something, woman, something, camera, TV test. That's got to be exhausting!

As we said, the worst week.

It is infuriating, knowing what is coming. The country could easily collapse in the next two to three weeks as the bills start coming due. This is exactly what we expect.

Some good news though…Trump was booed and faced protests as he arrived at his club.

The pool passed by Trump National Golf Club in Virginia at 10am. We are now holding across the street at Lucia’s Italian restaurant. We passed some dog walkers who booed the motorcade as we went by, one woman with a sign that read “We are good trouble,” and a man in a red “Make America Great Again” cap who saluted the vans.

And check out these signs:

This one is mocking Trump’s cognitive exam: 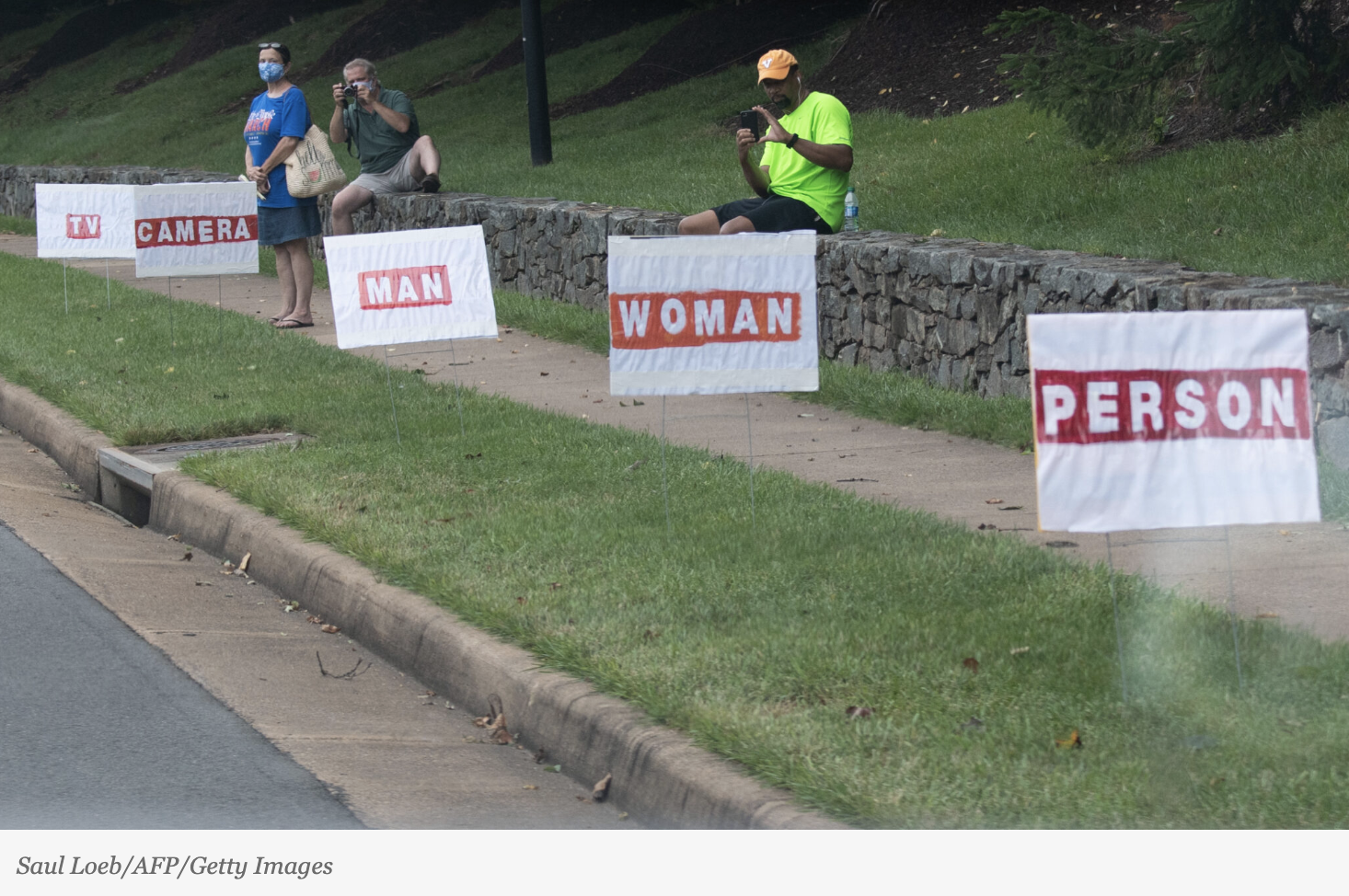 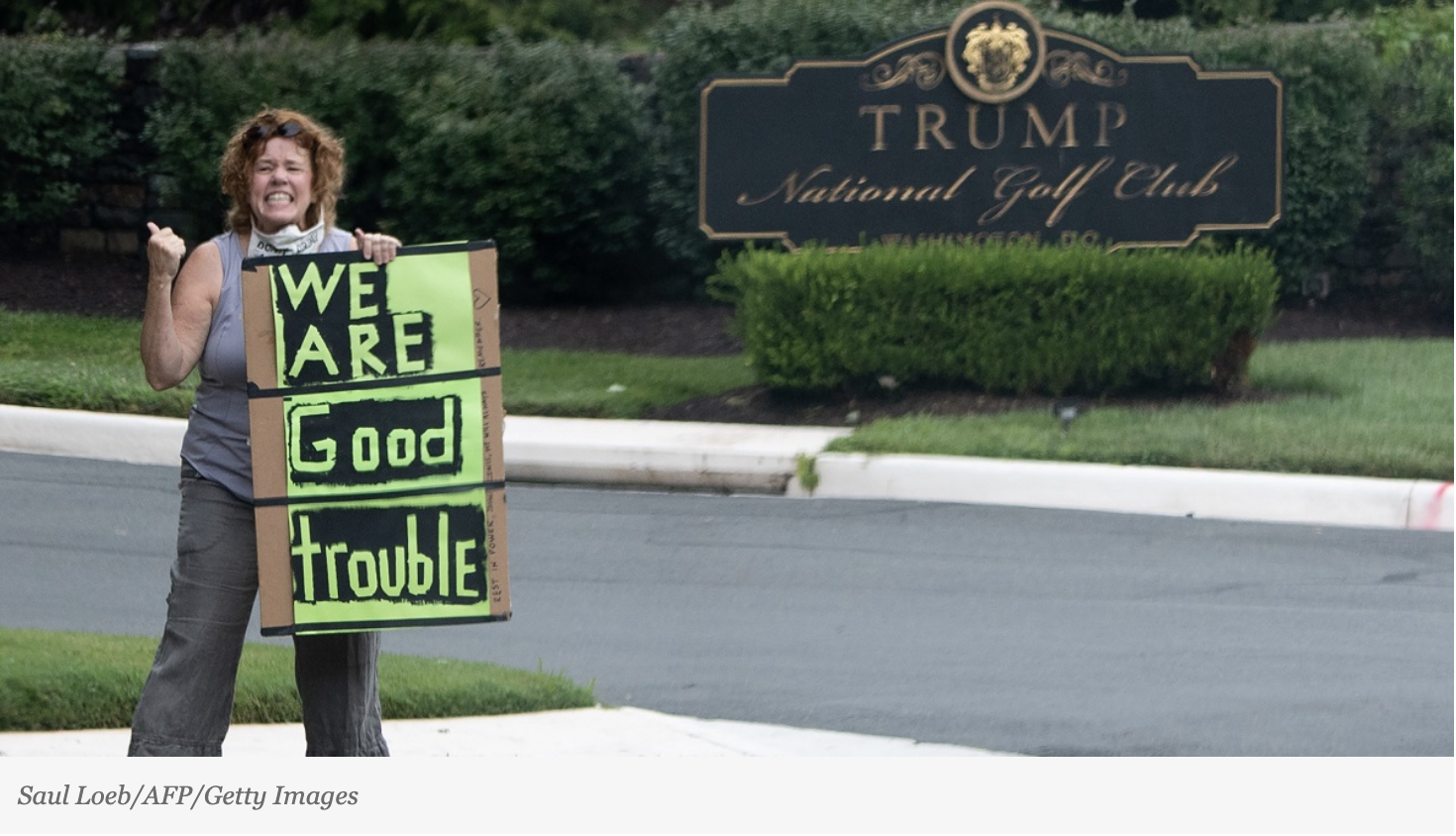