Singer Aubrey O’Day, who allegedly had an affair with Donald Trump Jr., launched quite the tweetfest after Thursday’s presidential debate, making quite a number of assertions (some that are pretty wild) regarding the Trump family, Newsweek [1] reports.

Donald Trump Jr. hates his father, and Barron Trump has acted aggressively toward staff on a private plane. O’Day also claims that even though Ivanka Trump is married to Jared Kushner, she’s actually a lesbian and that Eric Trump had sex with a former Miss Universe winner while he was dating his now-wife, Lara.

As Joe Biden and Donald Trump went toe-to-toe on Thursday’s final presidential debate, scores of celebrities on both sides of the political aisle tuned in. And that means there was plenty of commentary on Twitter. O’Day, who’s a member of the group Danity Kane, certainly didn’t hold back.

Her tweets have since been deleted, but it looks as though she wanted to clear the air a bit “since Trump has now lowered this debate to trashing family.”

According to Newsweek, this is what she tweeted:

—Ivanka is a lesbian on the low.

—Eric f***** miss universe on the apprentice board room table while with his now-wife.

In another tweet that’s also been deleted, O’Day alleges she has texts from Donald Jr. complaining about his youngest brother Barron.

“And while we are at it.. I have texts of don jr. telling me what a little s*** a****** barron is,” O’Day said. “That they were on the private jet and barron didn’t like his food so he threw the plate across the plane at the attendant. NONE of these people are INNOCENT of being a******* & liars.” 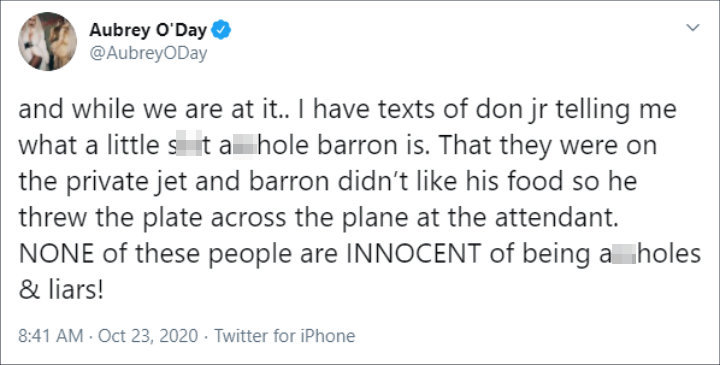 WOW. If Barron did that to me he’d be wearing that plate.

She also tweeted this, which has since been deleted:

“We need to stop discussing kids.. because Ivanka is a lesbian, yet doesn’t support women’s rights in this administration that she RUNS on the low.”

After the debate ended, celebrities definitely shared some pointed tweets. Bette Midler was convinced Biden won the debate by a wide mile.

#JoeBiden [2] by a mile! No contest. Cogent, patient & so smart, alongside the dimmest bulb in the pack. What an awful man, & what a horrible presidency. His name will live in infamy. Which reminds me…is StephenMiller dead? Over 540 children will never see their families again.

Alyssa Milano had this to say:

America or Trump. You can't love both. #BidenWon [4]

America or Trump. You can't love both. #BidenWon [4]

Joe Biden spoke the Truth with grace and poise and stood his ground against every one of Trumps lies. #BidenWon [4] #debates [6]

I think this one might be my personal favorite, though:

This one’s good too:

Biden won the last debate by default. He is winning tonight by simply kicking Trump’s ass like a Professor debating a monkey who just learned to paint circles and now thinks he understands Plato.