Don Jr. Chooses to Retweet Picture of the Reichstag Fire … But Not for the Reason You’d Think

Reichstag fire, burning of the Reichstag (parliament) building in Berlin, on the night of February 27, 1933, a key event in the establishment of the Nazi dictatorship and widely believed to have been contrived by the newly formed Nazi government itself to turn public opinion against its opponents and to assume …

Lately, many are comparing the attack on the Capitol to a failed coup. Hitler rose to power through various stages, but few were as big as the Reichstag fire. It is frightening to imagine what would have happened had the protestors outside the Capitol been given that option after Pence voted.

It appears to us that the nation remains in a state of shock. Congress should be investigating what happened and should not be home for the weekend. There are indications that the rioters had inside help, that the attack was far more coordinated than first imagined, we have reports that further attacks are being planned, and that Trump remains very dangerous.

Amidst all of this is the Right’s obsession with Trump and Twitter. That is the real grievance here if you ask them. They are not mourning the loss of Officer Sicknick’s life. (There are pictures on Twitter that will break your heart and turn your stomach.) Trump’s enablers are all over the net talking about the injustice Twitter imposed on Trump and Amazon took out on Parler. Trumpists scream that they’ve lost their ability to communicate, not caring that they’re making such pronouncements on the damned net and usually Twitter.

Meanwhile, Junior is angry that Parler now got the axe. But it wouldn’t be “Junior” without him finding a way to make his point without any sort of self-awareness. There are a lot of reasons to use pictures of the Reichstag fire this week. But exactly none of them are related to Twitter throwing his father off the platform or Amazon choking off Parler. But that’s exactly what Junior retweeted as his belief: 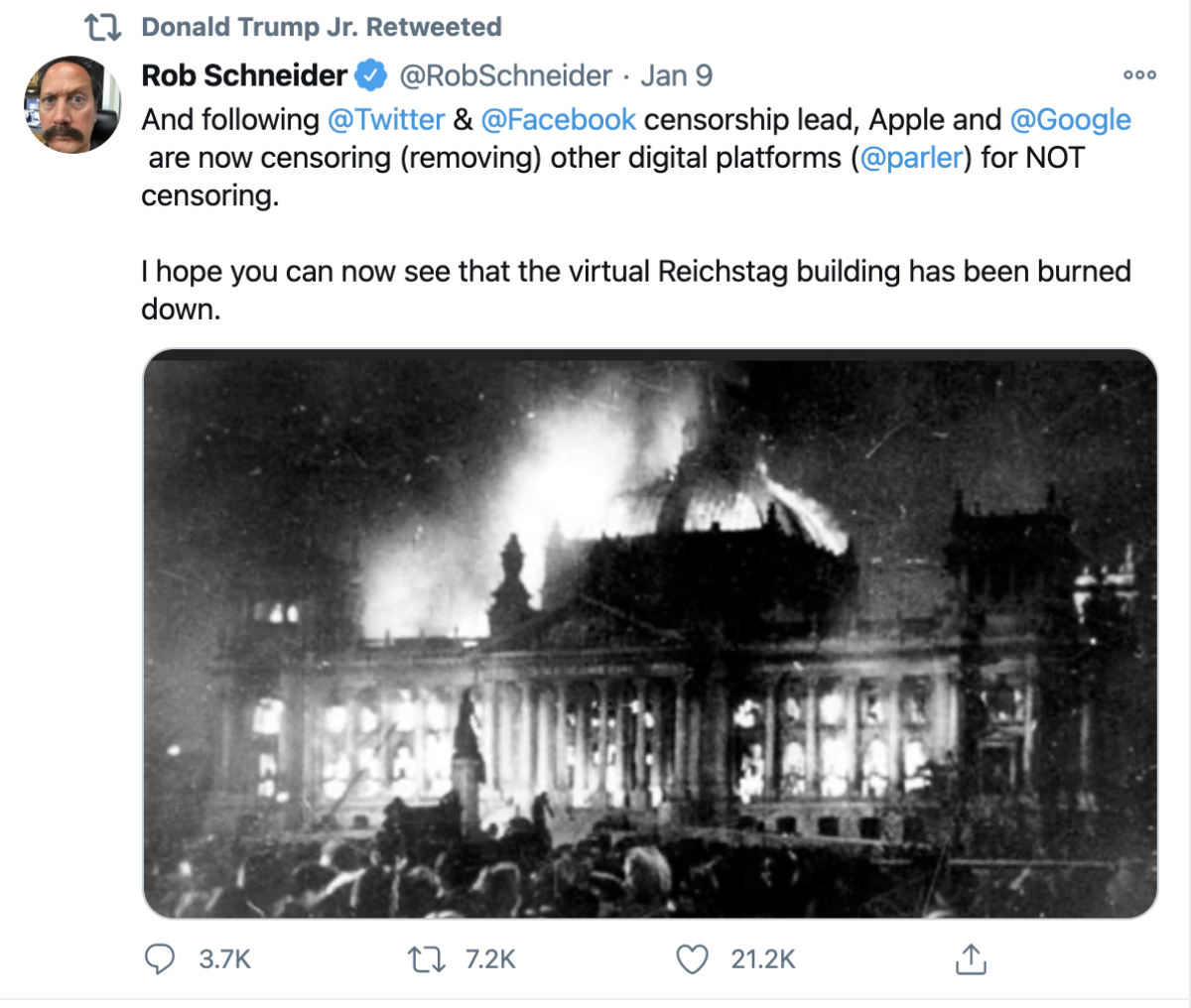 The Capitol got stormed with vicious mobs looking for Pelosi and Pence, but Junior retweets a picture of the Reichstag fire as representative of social media.

‘Anatomy of a Capitol Siege,’ in Two Minutes Here’s the Only Evidence Needed to Convict Trump in the Senate

When It Rains It POURS: Palm Beach Looking to End Lease at Trump International Golf Course