Conspiracy theories and propaganda are poison to democracy.

As we have said many times, the point of propaganda is not to get people to believe any one fact, person, or even a program. No, the entire point of propaganda is to condition society to no longer believe that real truth exists. The goal is to get a sufficient portion of the citizens to believe that the power brokers control all access to information and anyone who releases a story does so with an agenda. Given all the crossing agendas, there is no point in searching for the truth.

We see a lot of this on the American right. They believe that Joe Biden is a “pedo” as they call it on right-wing sites. The “Q” people – and there are now far more “Q-anons” than there were just prior to the election – have always had to change beliefs, but one article of faith is that the most powerful Democrats are all involved in some filthy international scheme. We even saw Kayleigh McEnany reference something about Biden and kids. When one no longer believes in the idea of “truth,” one gets to pick their own truths and everything is true so long as they believe it with sufficient conviction.

Only then do they seek facts to substantiate that truth, and we all know how it works from there.

It is apparently so bad that politicians on the Right convinced MAGAs to believes that the energy crisis in Texas is somehow directly due to Democrats’ focus on the “green economy.” You heard it, the windmills froze. But now we see a significant portion of the MAGAs believe in something even more ridiculous, a very viral post that went much further. They believe that Biden directed the weather to Texas.

A Facebook post went so viral among the Right that Politifact has a report, [1] having to “fact check” whether the federal government, on Biden’s behalf, directed an ice storm to freeze Texas and do untold damage.

A total of over 4 million people are without power tonight and will be for the next several days, some a lot longer.

Did you know weather manipulation and controlling the Jetstream has been going on for years and is not a conspiracy theory? Research cloud seeding and weather modification programs such as Harvard’s Operation Solar Shield.

Joe Biden’s “Dark Winter” statement was not a random thought, it was a foreshadow of what was to come. Texas is the only state to have its own, entirely independent electric grid separate from the rest of the United States. This is warfare, an attack on Texas by altering the Jetstream, seeding the clouds, and ultimately causing the storm that blacked out over 4 million people. Sound crazy? Too hard to believe? Believe it. 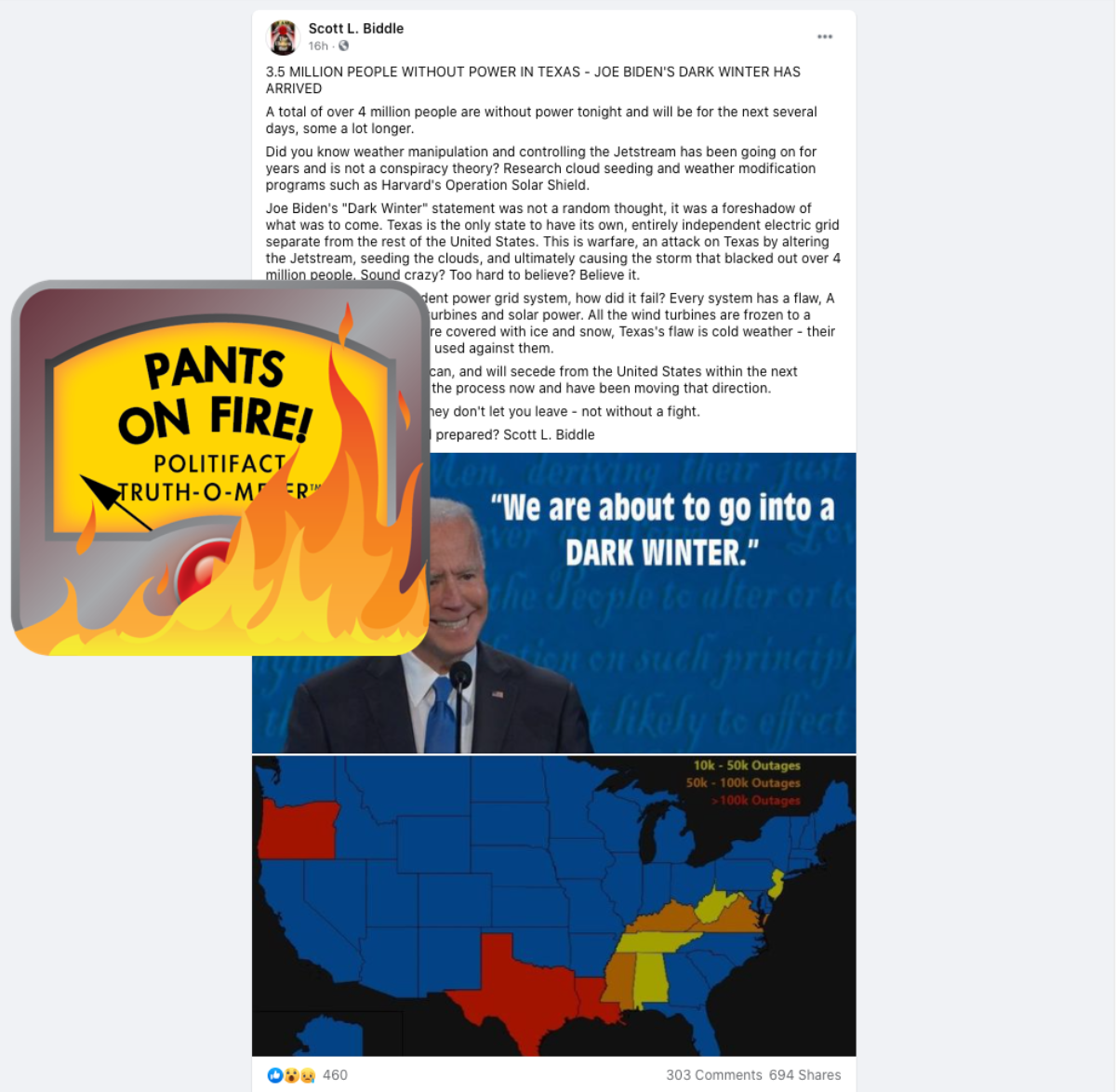 If that was a question to sane people, the answer is “no.” But apparently, enough people believed it that Politifact had to seriously address it:

In 1970, the state created [3] the Electric Reliability Council of Texas to avoid regulation from the federal government. The electric grid is not subject [4] to the jurisdiction of the Federal Energy Regulatory Commission,” reports Politifact’s Daniel Funke.

“‘Cloud seeding,’ on the other hand, is a real technique [5] that’s sometimes used to produce moisture in drought-prone areas. Aircraft inject particles [6] into clouds to encourage water droplets to freeze around them. In the right conditions, the process can create snow [7],” Funke writes.

Cloud seeding has been cited [8] as evidence for the chemtrails conspiracy theory, which falsely claims the government uses aircraft to spray chemicals in the sky to control the population. We found posts from Biddle [9] in groups dedicated to the conspiracy theory.

The post is inaccurate and ridiculous. We rate it Pants on Fire!

On the one hand, it is hilarious. On the other hand, it is scary as hell. This post is no more ridiculous than an international cabal of Democrats moving children around the world for abuse, and we’ve all seen the damage that conspiracy did and continues to do. But when one has given up on the truth altogether – the “New York Times is fake news! – one can believe anything.

A good portion of the public can even be led to believe that an attack on the Capitol is a good idea to save the Constitution. Many of them are just as ready to believe anything Trump says even now. Most Republicans do not believe Biden won the election fair and square. As we said, if one abandons the idea…