Texas GOP Mayor Reveals TOO MUCH About the GOP as the Storm Bore Down: ‘City and County Owe You NOTHING!’ and ‘Sink or Swim!’

We all must keep in mind that there is one party that doesn’t actually believe in a government that works. If people expected government to work, they might demand more of it and thus there would be less leftover to contract out to private companies. It was not by accident that Betsy Devos and her charter school mission found their way into the Trump cabinet.

In that spirit, we bring you Colorado City, Texas, Mayor Tim Boyd and his message to the city’s citizens prior to Texas’s worst winter storm in at least a decade.

“Sink or swim, it’s your choice! The City and County, along with power providers or any other service owes you NOTHING!”

Interesting, because we seriously doubt that the city, the county, and the power providers have such a badass attitude when it comes time to pay the monthly bill or annual taxes. Indeed, at that point, we’re pretty sure we know their position on who pays what. One might also ask why the city, county, and power company even form if this is the attitude. Do they pay the mayor any money?

“If you don’t have electricity you step up and come up with a game plan to keep your family warm and safe.”

Good thing we weren’t there. If we were there, the plan to keep the family warm and safe would have been to go down to the now irrelevant city hall and break in, to enjoy the heat powered by the emergency generators we assume they have. If the police or mayor protested, one could yell “Sink or swim!” and show him the post. The mayor never limited the families’ plans, only that they better have one. We would have a great plan.

“If you have no water you deal without and think outside of the box to survive and supply water to your family,”

Thanks, man, we just did. Now get out, it’s sink or swim and since you invited people to come up with a plan, we did. What’s yours? Moreover, our plan just happens to be one in which the government becomes as useless and we owe you absolutely nothing! Get out or I call the feds and we’ll see if they tolerate your plan.

“If you are sitting at home in the cold because you have no power and are sitting there waiting for someone to come rescue you because your (sic) lazy [it] is [a] direct result of your raising.”

Ahhh, we were raised to be a bit more clever than you, son. What makes you think that you can rely upon the government to come save your lazy ass? Were you raised to be this stupid? If so, smashing success there, Boyd.

“I was only making the statement that those folks that are too lazy to get up and fend for themselves but are capable should not be dealt a handout,”

Those folks? Who could he have possibly meant? We wonder where he spent the disaster.

Even though we had a bit of fun with Boyd, this crap is nothing to be laughed at. We know. But Boyd deserved to be fired, he clearly doesn’t want the job, how was he raised? Did his parents tell him he can say whatever he wants to the boss? And, as we said, he doesn’t believe in government so he shouldn’t be in it. 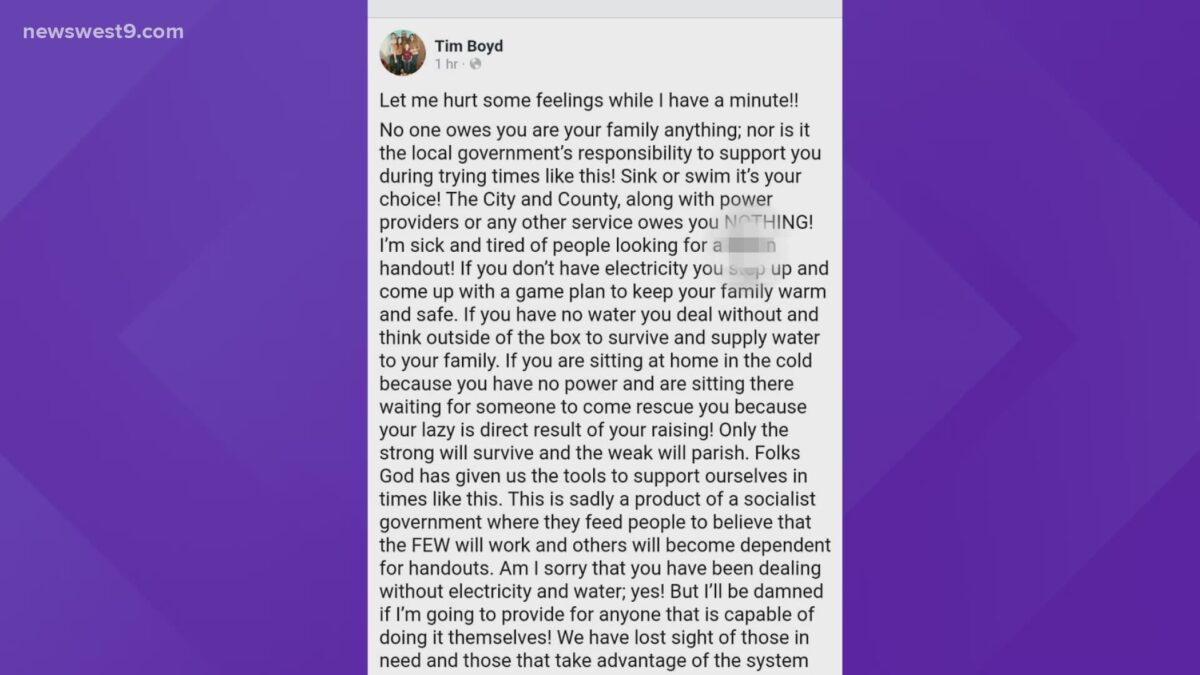 OH, and Boyd, can you show us the city’s disaster plan? We bet there’s one around here and we know a pretty good lawyer. The city had plans and you ignored them. So what are plans worth, anyway?

Many MAGAs Believe New Viral Post, That Biden Manipulated the Weather to Cause the Texas Storm