I recall a news show a few years ago, it’s hard to be more specific, in which a cellphone video caught Washington DC police taking a Black man into custody. The elderly man had been walking down the sidewalk in a very rich DC neighborhood with a big backpack. He had not committed a crime, he was simply “there” and in handcuffs.

A woman drove up in a very expensive car, I don’t recall the type, and parked at an angle. A roughly “60-year-old” white woman, jumped out of the car and started yelling at the police, literally charging at them, to “Leave him alone!” and practically un-handcuffed the man herself. It turned out, the man was a neighborhood favorite, a handyman that did odd jobs for everyone up and down the street. The backpack held his tools. Totally harmless. The white woman never felt the least bit threatened in chastising the police and forcing their hand.

Obviously, the symbolism sticks in my mind. There are some white people on this earth – not me – that are almost untouchable to the cop on the beat. If a cop puts a 60-year-old white woman in cuffs while she’s wearing a diamond tennis bracelet, she better be shoplifting or fighting, something obvious, they know it. Cher is this same type of woman. Cher isn’t “mean,” she is just untouchable.

It got her in some hot water over the weekend when she texted: (She strangely used caps. We will avoid the actual tweets and simply insert from the article in The Daily News🙂

“Was talking With Mom & She Said, I Watched Trial Of Policeman Who K*lled George Floyd,& Cried. I Said ‘Mom, I Know This Is Gonna Sound CRAZY,But.. I Kept Thinking …..Maybe If I’d Been There,…I Could’ve Helped.” 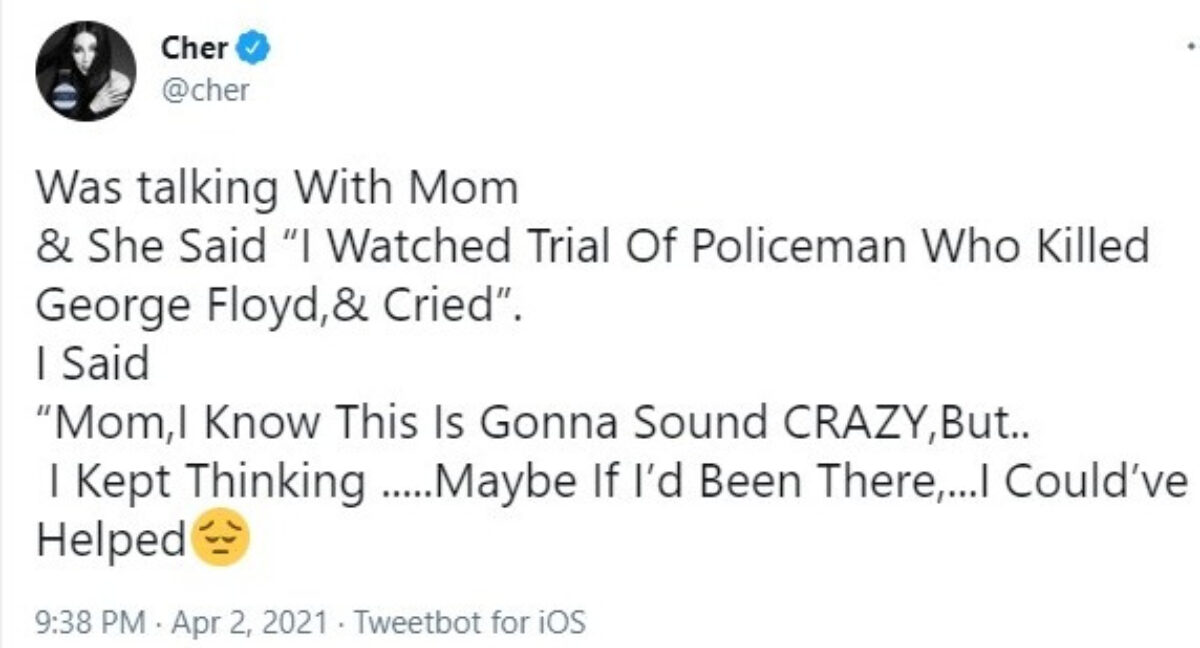 Well, the problem is that it doesn’t sound the slightest bit crazy in some ways. It is entirely possible that Cher damn well could have helped in that possible situation. The other problem is that that’s precisely the problem! It shouldn’t take a rich white woman in this country to help out Black men as they’re abused by the police, and Cher knowing that she likely could have and focusing on her faux self ignored the real tragedy here, perhaps almost making it worse. Cher also ignored that she’d likely never be such a neighborhood to begin with.

I Just got off phone With Friend Karen. Told her what Happened,& Realized,You Can P–s Ppl Off,& Hurt Them By Not Knowing Everything That’s”NOT Appropriate”To Say.I know Ppl Apologize When They’re In a Jam,BUTTO GOD, IM TRULY SORRY If I Upset AnyOne In Blk Community.I Know My (heart).

At least she learned something, of course, she had a lot of help:

“Oh yay another White person centering themselves around blk ppls pain. I wish I was there to stop you from tweeting this,” wrote Twitter user @Iconiecon.

One comment, by @LivisAlibi, praised Cher’s intention, but added that “a Black man shouldn’t need a white person to stand up for him to be safe. People will beat you up over this tweet, but go over the mean things and try to learn… PLEASE.”

And then I think the best summation is likely here:

“She could have worded it differently but I think her intentions were true,” echoed @CDonatac. “She wishes she could have helped. She’s an ally. People need to let this one go.”

There is a learning curve for many people in a privileged world. Need one point out that if a wealthy woman had jumped in and pushed Chauvin off Floyd, it is far more likely that – having saved Floyd’s life – the incident would then become “interfering with police work” because “of course he wouldn’t have actually k*lled Floyd”? No, it took a martyr to get this entire scene to us.

And that’s why the only way to “win” here, for all of us, is to start listening to the Black community and their stories and then demand change from the whole department, not any one incident in which the wealthy white woman can be the superhero.

Jen Psaki Patiently Squeezes the Life Out of a Question: Reporter Asks if Biden Regrets Criticizing Trump on Russian Bounties

Capitol Rioter Released on Bail, Judge Ordered Her to Wear Mask: So She Chose a Mesh One