Twitter Mistakenly Suspends Marjorie Taylor Greene, Again, and MAGAs are Going All Tin-Foil Hat About It

This is actually damned serious for reasons we will set out.

As we reported yesterday, Marjorie Taylor-Greene put out a video of her fanatically working out in a gym, which is fine. She has a lot of time nowadays because she doesn’t serve on a single committee and she already has a Biden impeachment bill. But Marj put the video out with a message, that working out was her COVID vaccine. The message violated Twitter’s policy to ban disinformation or propaganda, especially when combined in the COVID fight. Marj got a 12-hour timeout.

But MAGAs quickly began asserting that Twitter banned Marj for Tweeting out, “He has risen” as her Easter message. This assertion is made despite the fact that seemingly every MAGA politician put out some sort of Easter message without being suspended. There is also the fact that the “He has risen” tweet is still on her feed! Just like the religious messages put up by every other MAGA pol.

But one cannot reason with such sophisticated propaganda. Look at what happened with Trump, masks, COVID, the vaccine, the insurrection, and on and on. There is news out today that half of all MAGAs believe disinformation put out about the insurrection. Now they will clamp on to a rumor that their Christianity is being persecuted when the truth is that Twitter enabled their religious messages all day yesterday. MAGAs love feeding their victim complex.

But this isn’t any old regular victimization thing. This is not about racism or even an insurrection. This is about their Christianity, their identity. Rawstory brings us two examples:

“Jesus has Risen!! Wan to suspend me too?” one commenter wrote. “I don’t always agree with Marjorie Green but come on now. I’m pretty sure that doesn’t violate anything but keep on silencing anyone you disagree with. PS. That is what Hitler and other dictators did too.”

Happy Easter, everyone! He is risen! pic.twitter.com/yiBIYsh3Sb

Twitter isn’t the government but never mind that part. Another person:

“Let me guess…Twitter suspended Marjorie Taylor Greene suspended for posting ‘He has Risen!’ because their fact checkers couldn’t find any eye witnesses, 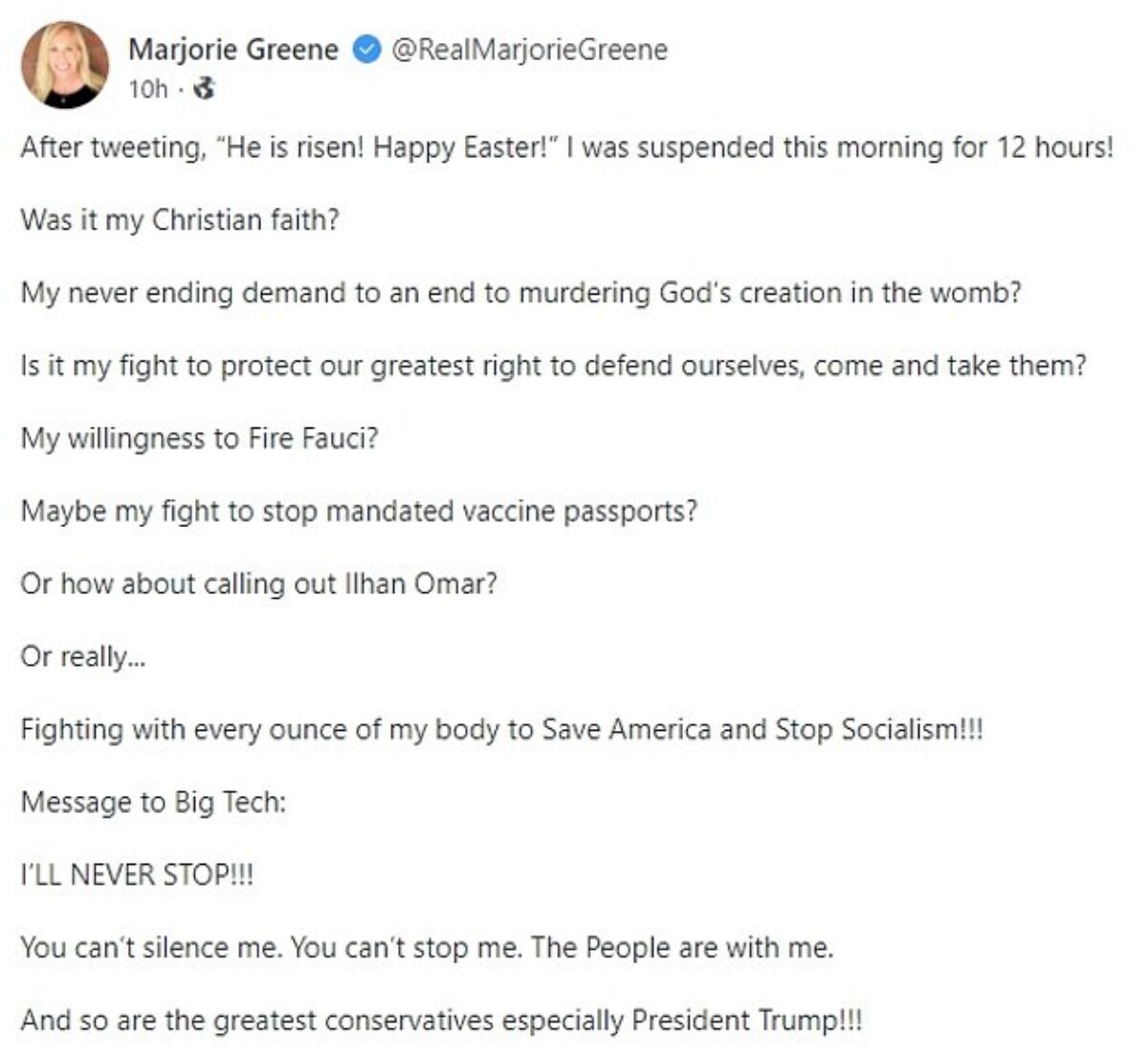 Nothing drives terrorism like the belief that one’s religious faith is persecuted. If one believes that they’re doing God’s work and God will approve of their violence, one can fly a plane into a building, or attempt to overthrow their own government. We have seen both in this country in the last 20 years. There is no rule that says it cannot get worse. It can and will until the propaganda gets corrected and that’s not happening any time soon.

Jen Psaki Patiently Squeezes the Life Out of a Question: Reporter Asks if Biden Regrets Criticizing Trump on Russian Bounties

Capitol Rioter Released on Bail, Judge Ordered Her to Wear Mask: So She Chose a Mesh One