Evidently, Trump’s having a rough couple of days because his latest “blog” posts exude a lot of anxiety and anger – more than usual – and, obviously, it is all centered around… you’ll never guess, the fact that he lost the election.

We find it increasingly important to report on his statements because – as we saw last week, this is becoming MAGA dogma now and whatever Trump says is canon. It is the GOP platform, the only one, stronger today than November 3rd, December 15th, and January 6th. It is much stronger than on January 6th. On January 6th, Kevin McCarthy blamed Trump. On Wednesday, he kicked Cheney out of leadership for blaming Trump, and on Friday he implied Biden was mentally unfit to be president on Fox News, as opposed to Trump who had all this energy, the cheeseburger-eating fat guy.

So, every MAGA in the country is now required to believe:

“As our Country is being destroyed, both inside and out, the Presidential Election of 2020 will go down as THE CRIME OF THE CENTURY! The polls were a joke. I won States in a landslide that I was predicted to lose days before the election. Other states had me purposely so far down that it would force people, even fans, to say “Let’s stay home Darling. We love our President,** but he can’t win.” … It’s called SUPPRESSION POLLING and it should be illegal.” 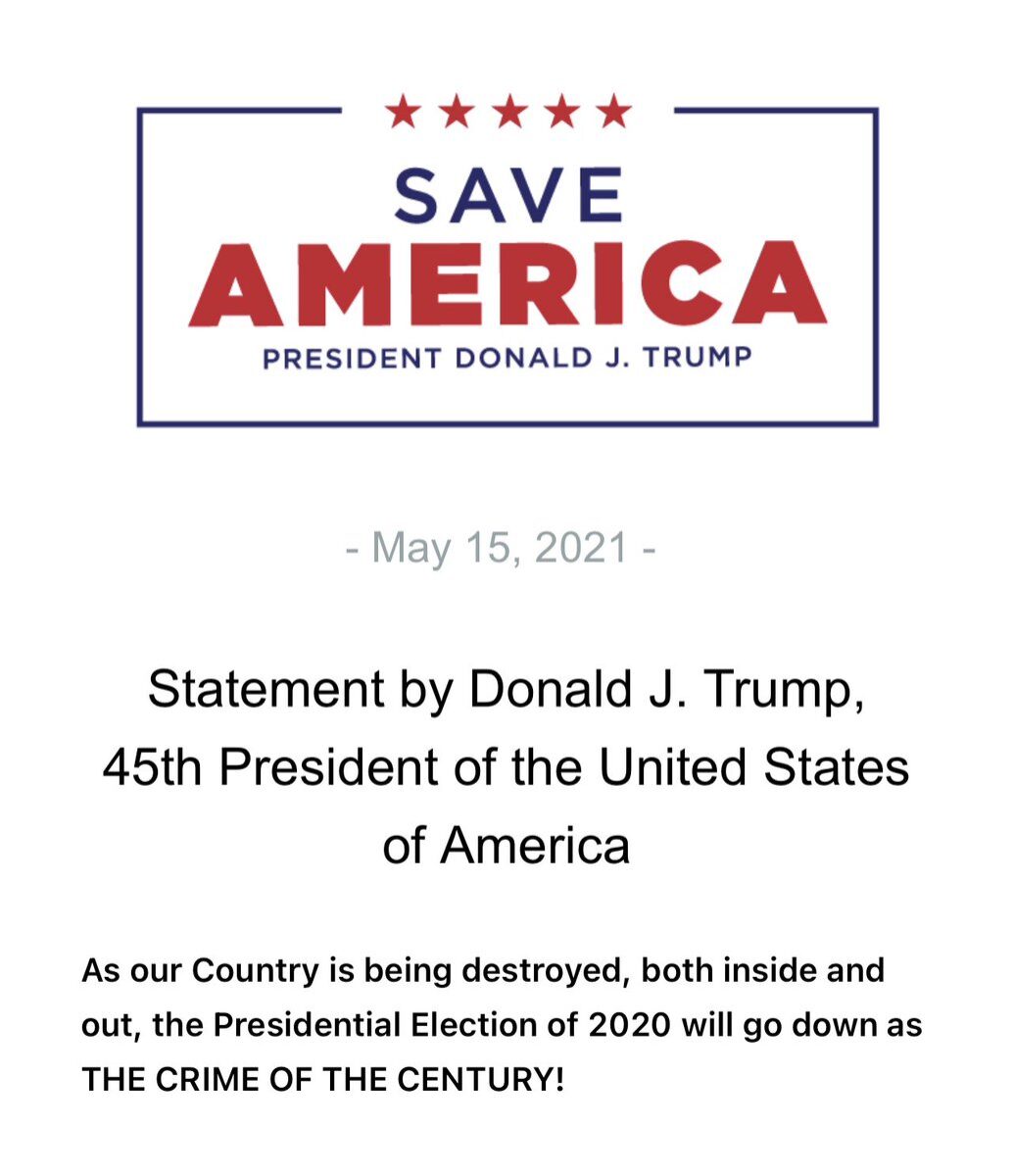 The crime of the century might have been how he won in 2016. We know criminal charges are filed against Russian nationals in U.S. Courts over Russian involvement. We do not know how high up the plan went, the people who approved it, and the entirety of actions taken (We are almost certain Roger Stone does know because he was untouchable). We know that crimes were committed, Mueller has them filed already.

**Trump fell in love with “Your president” and “Our president”thing and will use it forever. It fed a new niche in his narcissistic ego and he can’t let that go.

Everything is always someone else’s fault and now Trump again puts Mike Pence’s safety even more at risk:

“The 2020 Presidential Election was, by far, the greatest Election Fraud in the history. Had Mike Pence had the courage to send the Electoral College vote back to the states for recertification, and had Mitch McConnell fought for us instead of being the weak and pathetic leader, he is, we would right now have a Republican President who would be VETOING the horrific Socialistic Bills that are rapidly going through Congress, including Open Borders, High Taxes, Massive Regulations, and so much else!” 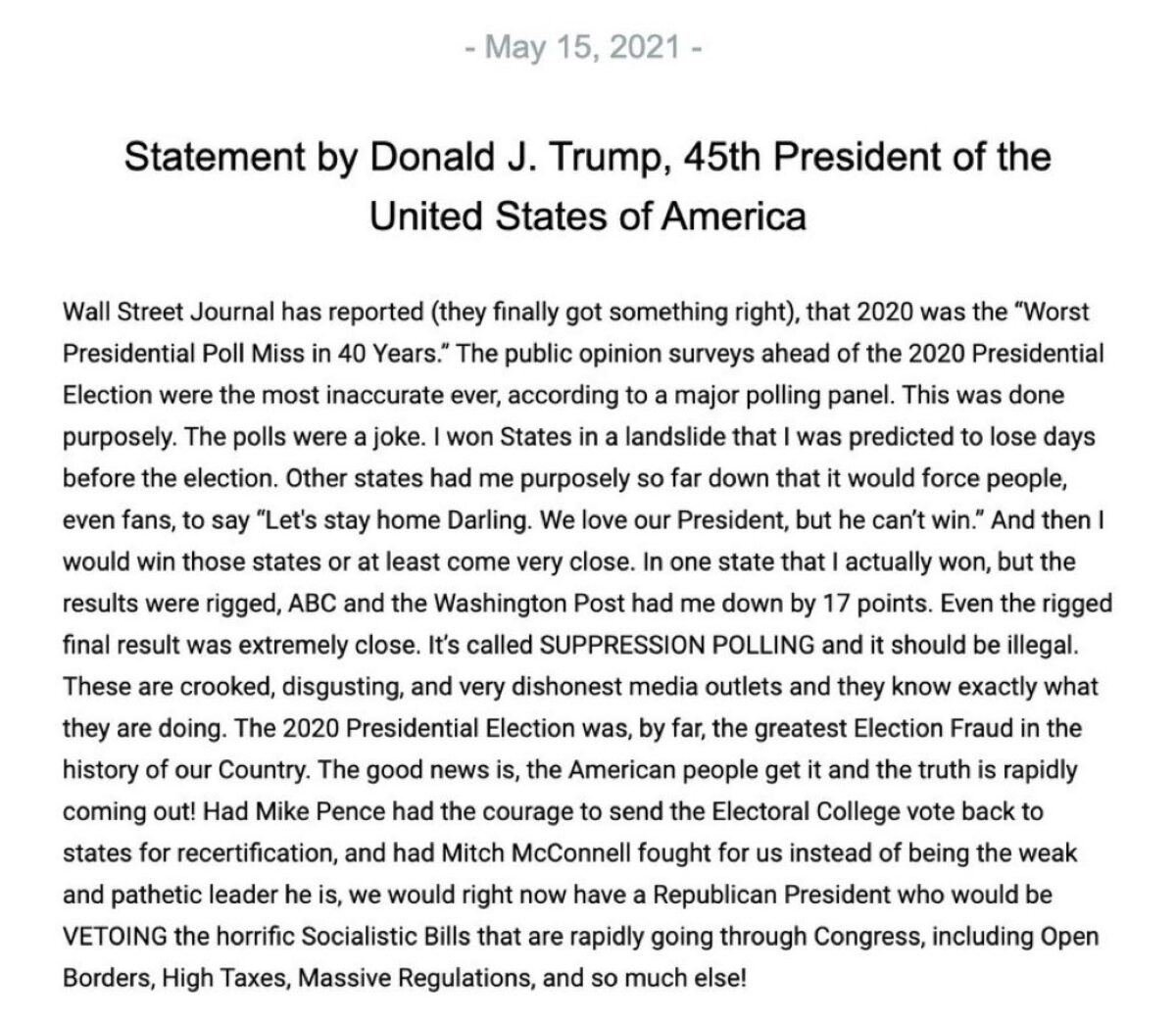 Look at the tiny mind! Pence had no authority to send anything back for recertification. So Trump is saying that had Pence agreed to a coup, “I would have won” – no need to count again, I would have won, even though every state had been through recounts. He is simply saying that had they sent back, they would have been reversed. Because.

And, the best part. Trump assumes that all congressional and senate races were untouched. No problem. He assumes that there would be a Democratic House and Senate, saying all these bills would be vetoed. HE is the ONLY victim.

And yet this is now FACT on the MAGA right.