Conservatives are sometimes notoriously thin-skinned and this was in evidence once again when New York Times journalist Katie Benner asked a ponderous question while at the same time calling former President Donald Trump’s supporters “enemies of the state.”

“As Americans, we believe that state power should not be used to work against a political figure or a political party,” she added. “But what happens if a politician seems to threaten the state? If the politician continues to do so out of office and his entire party supports that threat? The dilemma was unresolved by the Russia probe and 2 impeachments. With many Republicans denying the reality of the Jan. 6 attack, I doubt the #January6thCommittee will resolve it either. That leaves it up to voters, making even more essential free, fair access to the polls.” 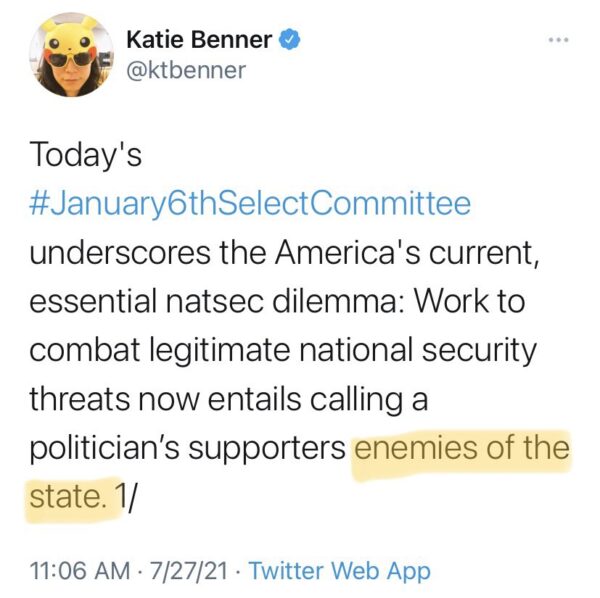 But then later on Tuesday Benner tweeted ‘I deleted unclearly worded tweets regarding the Jan. 6 committee.” Mediaite notes she offered no apology. Benner also deleted that tweet, but a screenshot is below. 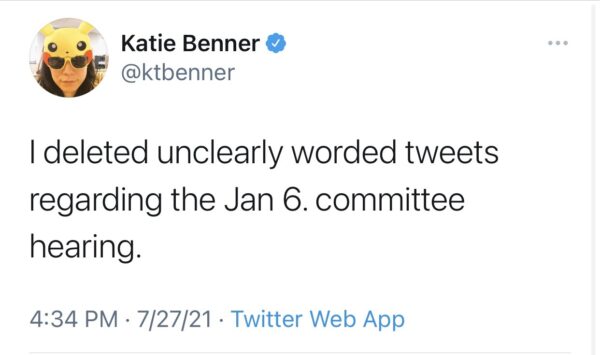 I know more than a few conservatives are butthurt over her comments, but really what were those who swarmed the Capitol grounds on that tragic day other than enemies of the state? They were attempting to upend democracy by undoing a legitimately held election and their violence was spurred by former President Donald Trump who continued to deny his loss and to spread baseless lies that the election was stolen.

And few Republicans did anything to stem this dangerous tide. These people are ridiculously quick to insult progressives, calling us “snowflakes” and “libtards” and then not being able to handle it when we hand insults back to them.

Some notable conservatives jumped at the chance to vent their umbrage at Benner:

“A writer for the most prominent newspaper in America, the NY Times, vilifies us as ‘enemies of the state’ in her Jan. 6 analysis. The ruling class hates us, and the corporate media is the enemy of the people (I’ll agree this is at least partly true)” tweeted Newsmax host Steve Cortes, who’s a former senior Trump campaign official.

A writer for the most prominent newspaper in America, the NY Times, vilifies us as “enemies of the state” in her Jan 6 analysis.

The ruling class hates us, and the corporate media is the enemy of the people. pic.twitter.com/1JQAJmoqpN

The noted left-wing journalist Glenn Greenwald managed to connect the dots between right- and left-wing propaganda:

Hearing anyone describe a traumatic and violent experience provoke emotions: even for police officers. That's what today is for.

But the fixation on 1/6 is about exactly this: classifying Trump supporters as Enemies of the State for political gain & Security State power.

It’s been my observation that the right-wing is far more guilty of trying to portray left-wingers as enemies of the state, even to the point of trying to blame Antifa for the Jan. 6 siege.

Fortunately, Twitter users were on hand to let conservatives know their thoughts on this.

Do you own any mirrors?
Take a real close look. You are aging by the hour.
This is what happens when you sell your soul to the devil.
The legend of Faust is a thought-provoking tale from the middle ages, which has a surprising connection to the world of aging….

It suits all of you.

Have you tried *not* being enemies of the state?

Don’t forget most Americans hate you too. Didn’t want you to leave that out.

Those who wanted to attempt a coup by refusing to accept a peaceful transfer of power in this country are indeed "enemies of the state". This includes those who invited the riots at the US Capitol on Jan. 6.

You are a lost human being, my dude

well, that's what they are, so