That's got to hurt.

Most people aren’t aware of the inner workings of a news broadcast, but it’s a relatively complicated system. Cross-channel communication, knowing which cameras to look at, and getting messages live while on air can all throw a wrench into a live broadcast.

But sometimes the chyron — that little scrolling news bar at the bottom of the screen that just shows headlines for the top stories of the day — puts on a cape and flies around the broadcast like a superhero.

That’s what happened on Steve Bannon’s show on Friday, when the top story of the day happened to be about Bannon himself.

Many times the chyron is automated, so they don’t know what it will say. We’re not sure if that’s the case here, or if Bannon knew about it and thought it was some kind of power move. But either way, it’s hilarious.

Unfortunately, your humble author can’t even go to the Twitter page of that guy on the right that Bannon’s promoting — alt-right commentator Jack Posobiec — to see whether anyone even noticed what was going on. It seems like Jack doesn’t like me, and hasn’t for a long time: 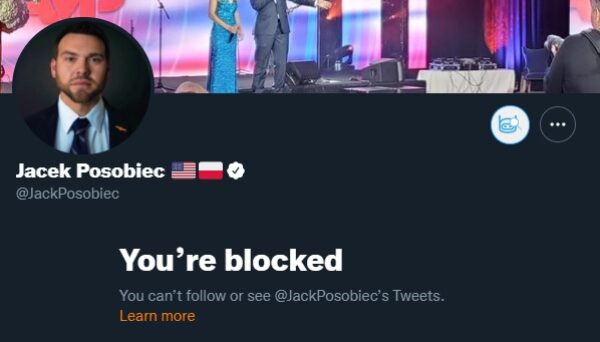 Whatever the case, it’s actually pretty likely that Steve will embrace the indictment. He has been spoiling for a public fight over his access to Donald Trump during the 2016 campaign. Steve Bannon wants almost nothing more than to be a martyr to his followers, much like disgraced former general Mike Flynn, who was caught lying to the FBI. Trump fans relentlessly hounded the former president to pardon Flynn for his crimes, and we’re sure that Bannon believes his own crimes won’t be significant enough to do much time in jail.

As we said yesterday, however, we hope he gets the maximum:

Steve Bannon just got indicted on 2 counts of Contempt of Congress: One for failure to appear and one for not producing required documents.