Kyle Rittenhouse is a hero. A MAGA hero. (Bear with us a bit.)

At the tender age of 17, he had decided he had had enough. He picked up a g*n that he is not allowed to carry across state lines (legal experts cannot figure out why the judge changed his ruling on the charge), and inserted himself into a situation where he would get to sh00t some liberals protesting. He might help “keep black people in their place.” (The victims were not black, but because they took up the black cause they may as well be in MAGA eyes, they’re liberals, period).

He came with the same type of g*n that the MAGAs love, the most powerful on the market, the type of g*n they dream of using on liberals. He is a hero.

But what good is a MAGA hero if he cannot be used by MAGA pols? The Daily Beast explains:

Kyle Rittenhouse attorney Mark Richards slammed GOP congressman who practically begged his client to come work for them, declaring that their internship offers are nothing more than a cash grab. “They’re raising money on it and you have all these Republican congressmen saying come work for me,” Richards said to Insider following Rittenhouse’s acquittal Friday. “They want to trade on his celebrity and I think it’s disgusting.”

The left should be angry about a lot of things but not angry at Rittenhouse’s lawyer who had one job. He was hired to protect his client, not fight for a cause, indeed he refused calls to fight for a cause when he initially took the case.

So which MAGA pols are making the offers? The ones you would expect:

The remarks came following offers from far-right lawmakers [1] such as Reps. Paul Gosar (R-AZ), Madison Cawthorn (R-NC), and Matt Gaetz (R-FL), who bantered on Twitter about who could scoop up the conservative poster child. Richards did not mince words for Donald Trump, Jr., either, after he tweeted—and deleted—that a g*n rights organization would send Rittenhouse a g*n. “He’s an idiot. I don’t have to expand on that because it speaks for itself.” 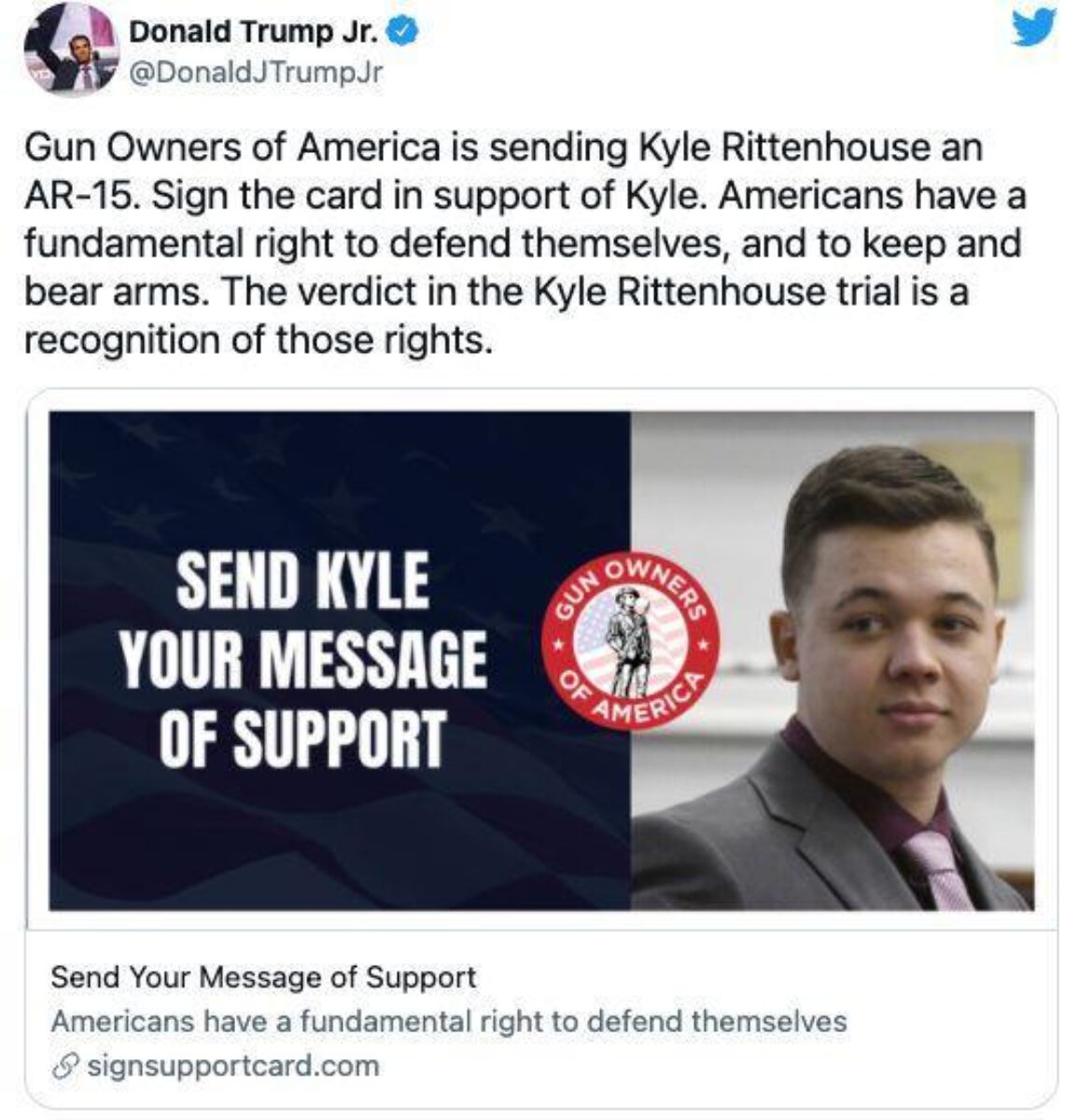 This is a messed-up kid who had issues well before he got into this situation, one involving issues with a girl and other disturbing statements. But he’s a MAGA “hero”, not as a person, but as a cause. The MAGA pols simply want a part of that cause.

Unfortunately, the cause itself is disgusting and what was being protested that very night.

[email protected] and on Substack: Much Ado About Everything [2]