Trump’s NRA ‘Dance’ Won’t Go Away: Some Serious People are Livid at What He Did, ‘Psychopath, Narcissist, or Evil?’

Donald Trump has done countless disgusting things since he stood on that escalator in 2015. Countless. Mocking a disabled reporter. Calling our fallen “suckers and losers”.

But what Trump did on Friday, as he concluded his speech at the NRA Convention in Texas, really topped the list, and people are absolutely sickened by just how craven this man truly is.

By now you know what happened. Following his speech to the NRA ghouls who gathered to watch their God Emperor speak, Trump danced off stage to the 1966 song Hold On, I’m Comin’ by Sam and Dave. The owner of the song, the estate of Isaac Hayes, is disgusted by what happened and tweeted that they would never allow the use of that song to be played by Trump. 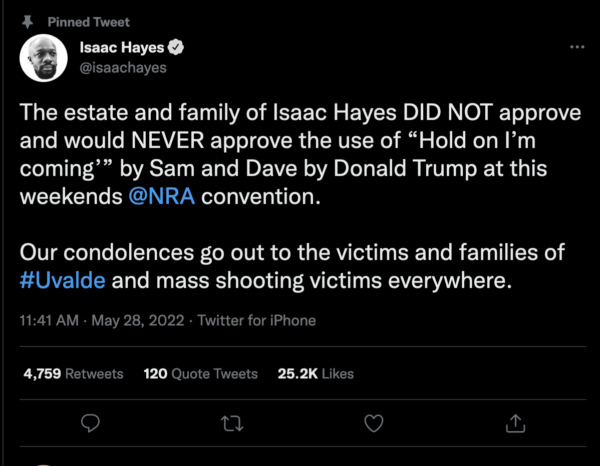 Trump spoke at the event, which was held in Houston, just three days after 18-year-old gunman Salvador Ramos killed 19 children and two teachers at Robb Elementary School. During his speech, Trump read out the names of all 21 victims, while mispronouncing many of them. Trump ended his talk, as he has done at numerous rallies in the past, by dancing.

This final act drew incredible anger from online pundits, politicians, and the public, who viewed it as extremely disrespectful to the deceased victims.

California Governor Gavin Newsom, a Democrat and frequent critic of Republican policies in Texas, was among the most prominent figures to lambast Trump’s dance. The clip featured in the tweet that he shared Saturday has since been viewed over 2.7 million times.

Children were gunned down and Trump and the NRA are dancing. https://t.co/UxemySPGTa

And they weren’t alone. Some of the tweet responses were absolutely heartbreaking:

In the shadow of a bloody massacre that took the lives of 19 children & 2 adults…. on a stage for an organization that has done more to endanger the lives of Americans than any other… this damn fool is dancing! #Infuriating #Disrespectful #TodaysGOP pic.twitter.com/29nJKDE4n6

The sick bastard read the dead kids’ names and then DANCED. pic.twitter.com/jE1wg6K2te

Trump exploited the names of 19 murdered children at the NRA conference and then danced—proof monsters exist.

So during this NRA conference trump read (and mispronounced) the names of the 19 dead children and the two teachers and then at the end of the speech he did a little dance?

Mute me if you must, but every single day people are going to be reminded that the man they worship danced to the names of dead children at a gun convention. pic.twitter.com/HxdIuFgS8T

Donald Trump finished reading the names of the victims in Texas, then he did a dance. The NRA wants to say guns aren't to blame, mental health is, let's pass universal background checks in Congress. The right fights it, fights defining assault weapons, and defends ghost guns. https://t.co/viRvvXVTp7

The only thing that ever brings a fleeting joy to this sick, dark-hearted resentful narcissist is other people’s pain.

Nicole Hickman James is a lifelong Democrat and political activist who first cut her teeth as a teenager volunteering for Mike Dukakis’ presidential campaign. She has worked and volunteered for John Kerry, Hillary Clinton, HFA (Hillary For America) and Organizing For Action. She’s passionate about liberal and progressive causes, and considers President Obama her most favorite president ever. She holds her Bachelor’s from Boston College and her Master’s from Columbia University, both in Economics. When not working as a writer, she enjoys traveling and spending time with her three college-aged children.