Things haven’t been going so well for the old boy lately, Trump. Maybe that’s why he looks like sh*t in every picture we publish and is so angry on Truth Social, calling out specific people so fiercely it is like a knife to any Republican. And that’s just his average day.

After another terrible week of news on the investigation front (Everyone seems to be bailing now, talking to the Committee, perhaps DOJ, and the grand jury) and then a horribly received golf tournament with poor crowds and tickets down to a humiliating one-dollar, yes – Trump has his reasons to be feeling some tension. Most people would find a healthier way to release it. Most people aren’t Trump.

From just this morning:

Trump started out with January 6th on his mind. He’s referring to the mayor of DC and Pelosi and will get back to Pelosi in a bit:

January 6th is her and Nancy’s fault. “No, I’m not kidding” (as Joe Bidden would say!) 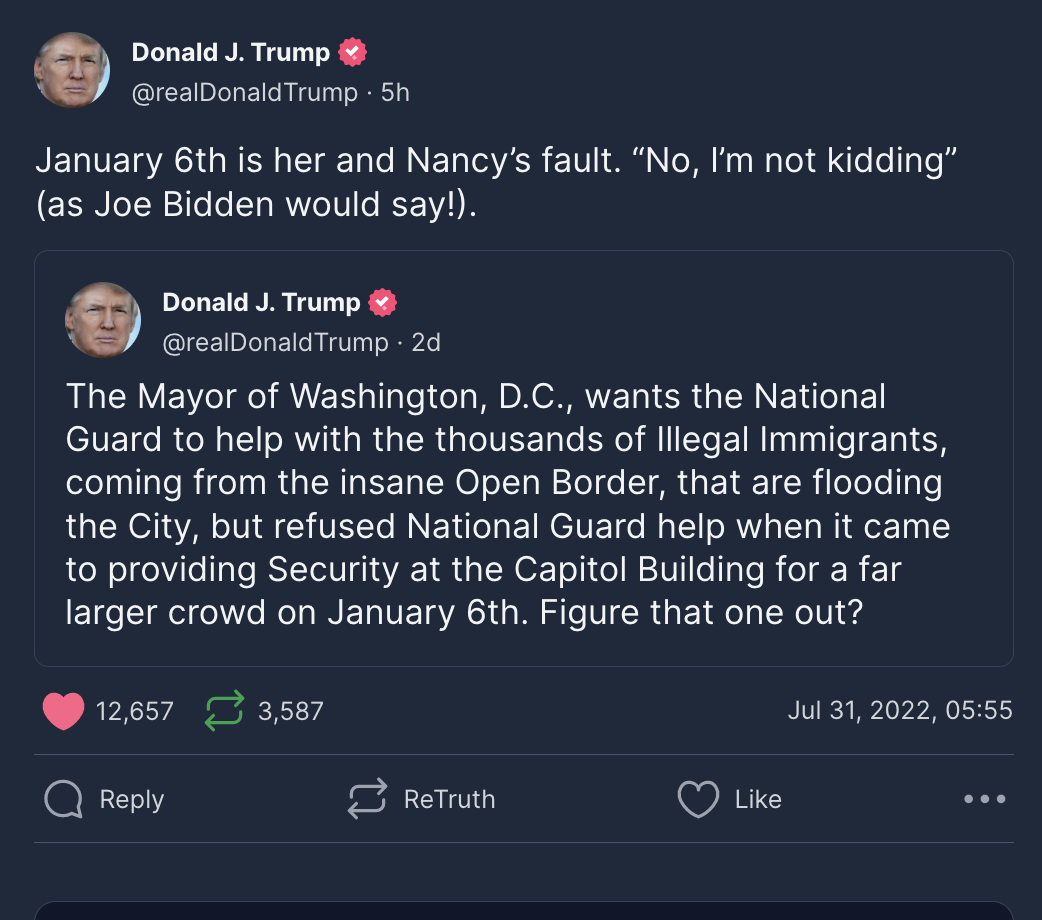 He is raging at anyone denying he won in 2020, especially in Wisconsin:

Robin Vos has done a terrible thing to Wisconsin. Election Integrity seems to mean nothing to him, despite a sweeping Wisconsin Supreme Court Victory. It was a RIGGED Election. A lot of people will be voting against Vos on Tuesday, and for very good reason. A do nothing RINO!!!

Sweeping? It was 4-3 and written by the biggest MAGA on the court.

…And Robin Vos is only getting worse. Wants toll booths put on many highways, and a BIG GAS TAX ASAP. He is a RINO disaster, very much as the worst politician in the Nation, “Giveaway” Mitch McConnell, who gives the Dems everything, and gets NOTHING for it – Never fights for Republicans! 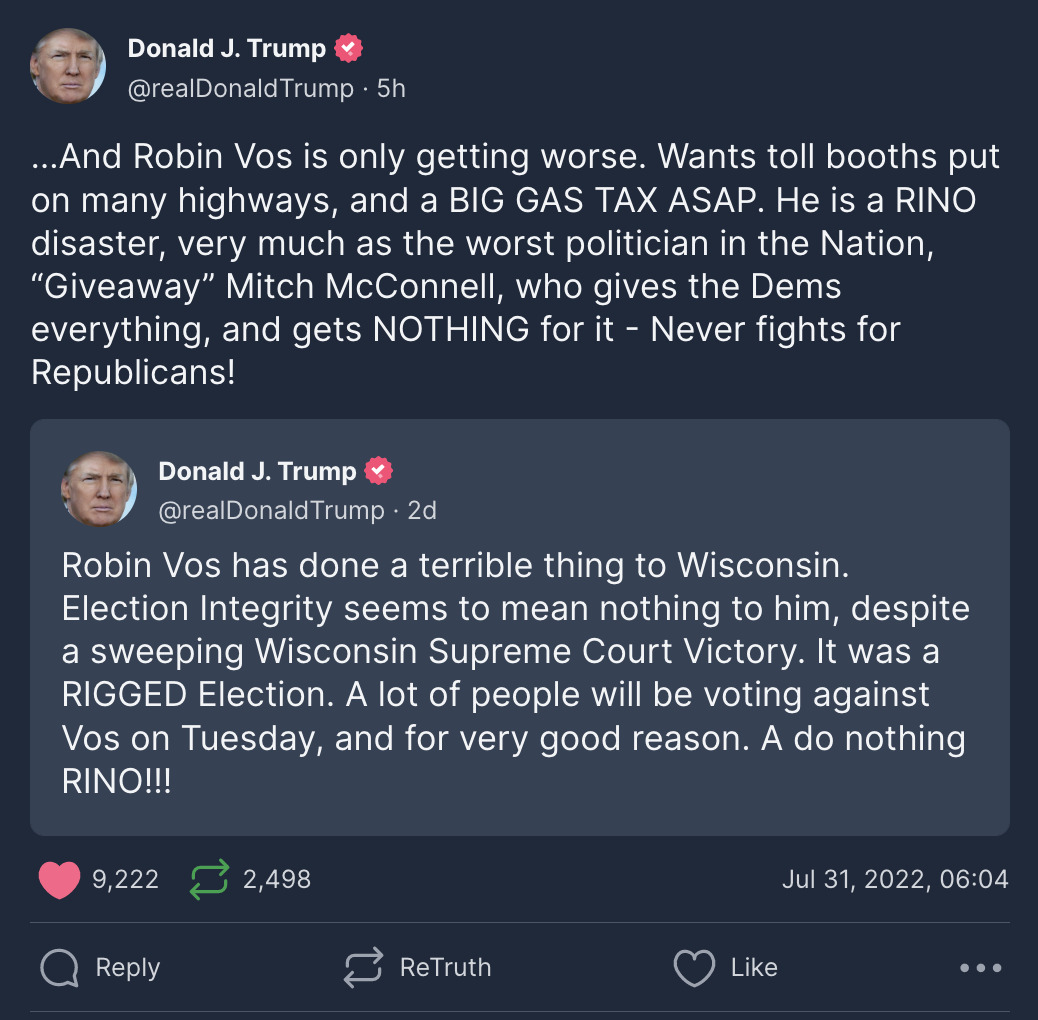 Robin Vos is sooo bad for the Great State of Wisconsin that I am seriously thinking of Supporting and ENDORSING his Opponent. Anyone would be better! STAY TUNED!!!

This is below is simply cruel and beyond comprehension when it comes to acting at all “presidential.” Then again, Trump prides himself in not being presidential:

Joe Biden’s second bout of Covid, sometimes referred to as the China Virus, was sadly misdiagnosed by his doctors. He instead has Dementia, but is happily recovering well. Joe is thinking of moving, part time, to one of those beautiful Wisconsin Nursing Homes, where almost 100% of the residents miraculously, and for the first time in history, had the strength and energy to vote – even if those votes were cast illegally. Get well soon, Joe! 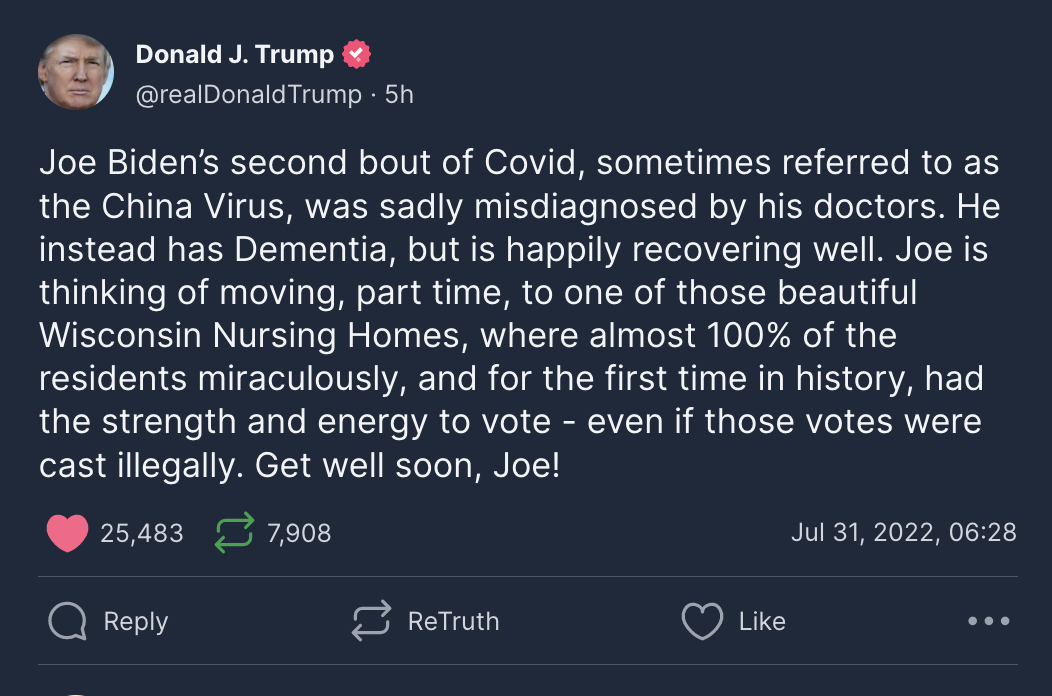 A follow-up on Trump’s raging tweet about Pelosi’s possible trip to Taiwan. (She is visiting Asia anyway):

Because she’s Lonely, and Crazy as a bedbug! She needs to be away from home, especially at this moment, even if it starts World War III. 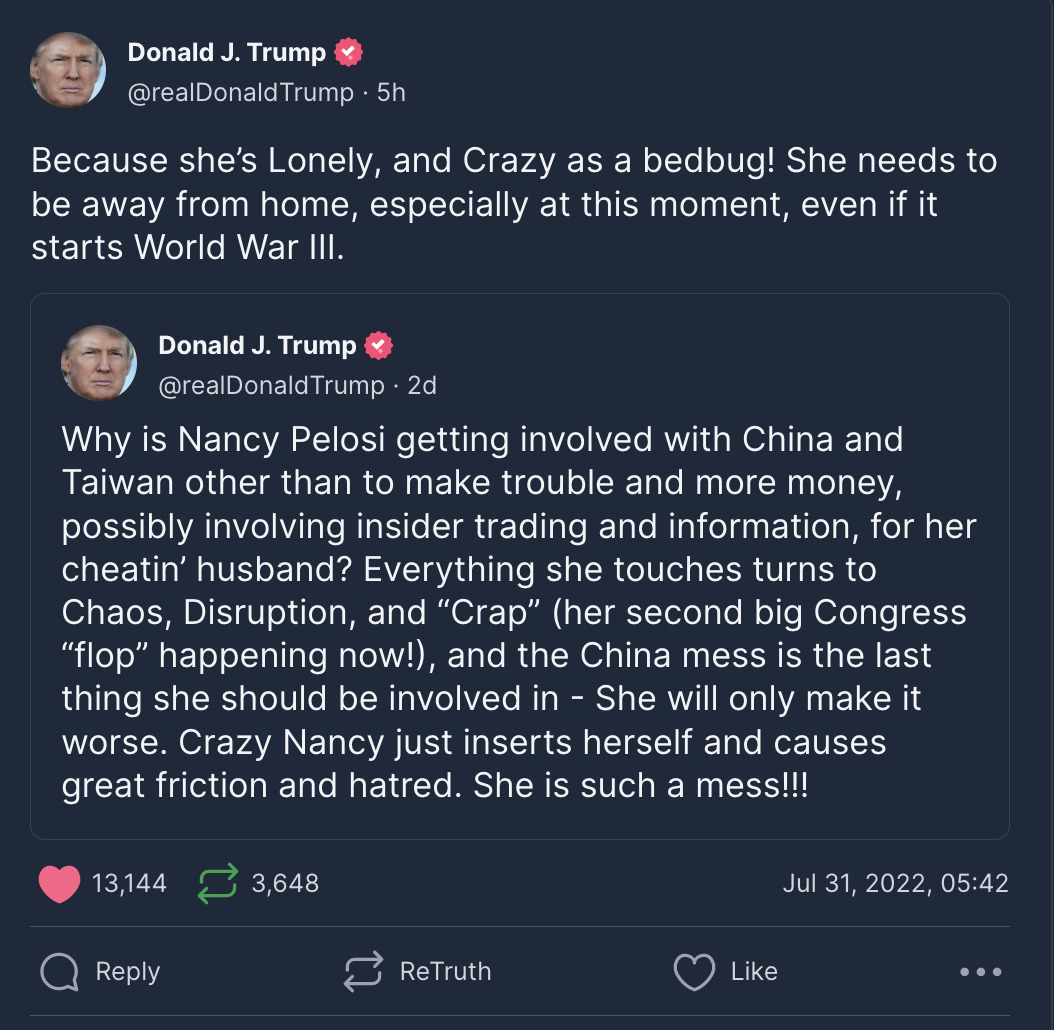 And that is just so far this morning. He has to endure another day of a golf tournament that is an abject failure, at least with respect to attendance and thus prestige. This is well beyond his normal rage, which is bad enough.