Donald Trump is having a day. And probably a bad one. As the good people at the Lincoln Project revealed yesterday, Trump is currently involved in nineteen civil and criminal cases combined as a defendant. NINETEEN. And some of those could land him in prison.

So yeah, Trump is having a day. And Trump is fairly transparent, when he’s upset, or happy, or worried, he hits social media and posts away. As of 5pm Eastern, Trump has posted almost 50 times to his Great Value™ Twitter site, Truth Social.

Most of the posts have been links to articles that praise him, of course.

For example, Trump posted a link to an article on the right-wing site Town Hall called “The Washington Establishment Fears A Second Term Trump”. LOL, whatever.

Trump posted a few links to articles at American Thinker, which is just an awful MAGA blog that doesn’t even pretend to be fair. One article was titled “Donald Trump is running” which is news to us.

He posted a link to an article at Breitbart, titled “Trump Says Every Document He Took to Mar-a-Lago Was Declassified; Warns Country Won’t Stand for an Indictment”. LOL again. Trump could say the moon is made of cheese, it doesn’t make it true.

Trump posted approximately another 10 articles, then lashed out at Mike Pence for not breaking the law and throwing the election to him. Trump wrote, “The House just passed a Bill which prohibits the Vice President from doing what all the “great” Democrat & RINO legal scholars said he couldn’t do, “under any circumstances,” regarding sending election results back to State Legislatures. If the V.P. couldn’t do it, then why are they passing legislation saying he can’t do it. BECAUSE HE COULD HAVE DONE IT, and should have, based on large scale fraudulent election results. Would have been a different result. REPUBLICAN SENATORS SHOULD VOTE NO!” 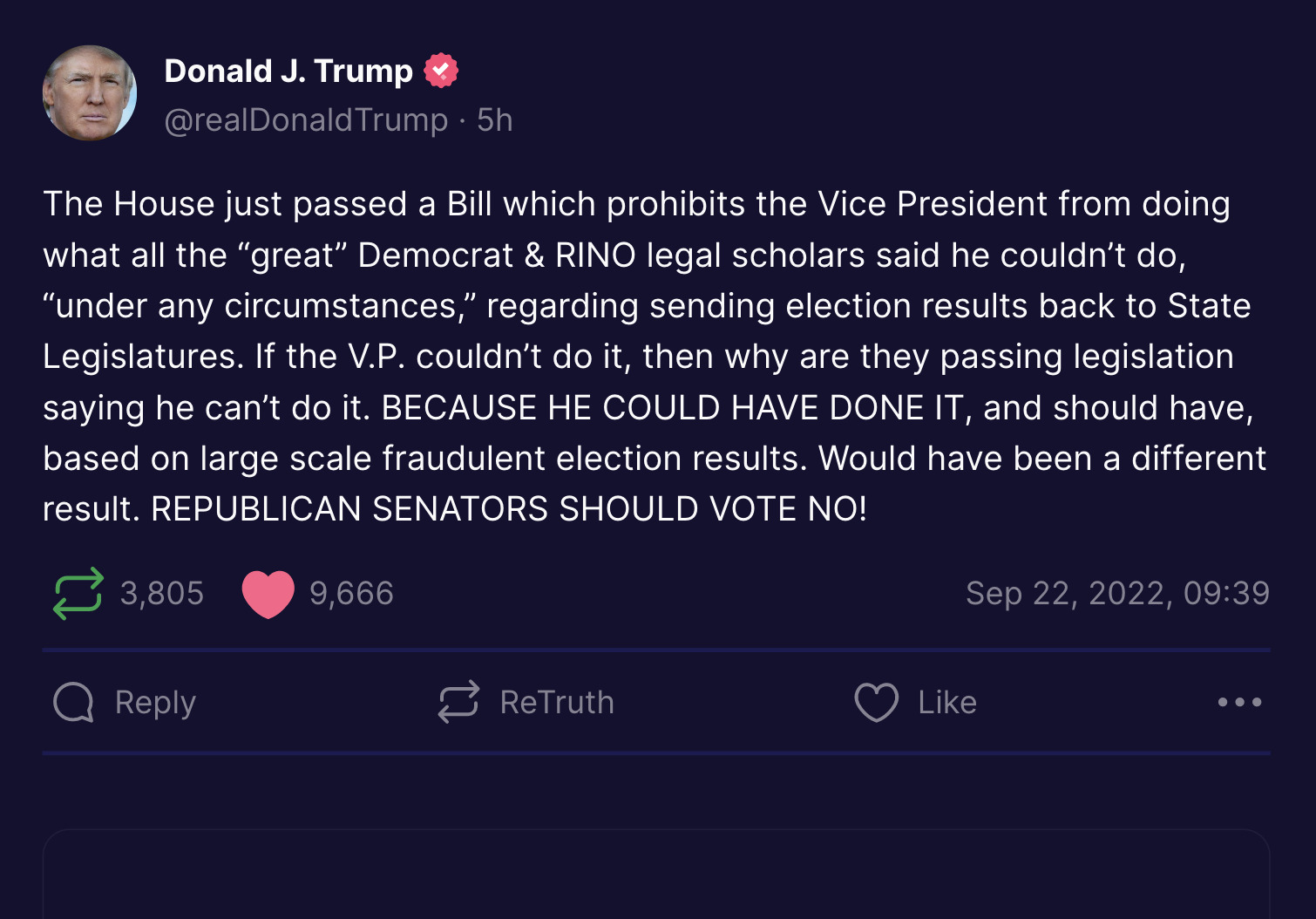 And of course what Trump asserts is not true. The vast majority of legal scholars, including many from the conservative Federalist Society, argue that attorney John Eastman’s claims about the vice president’s purported powers to reject election results have no basis in constitutional law.

Trump then posted a tweet about calling Trump supporters “deplorable” which they are. The email lady really nailed that one.

Trump then went off on “racist” Letitia James, saying, “Racist A.G. Letitia “Peekaboo” James, the failed Gubernatorial candidate, is now running second to strong crime fighter MICHAEL HENRY. This could be a big upset because she has been a terrible A.G. when it comes to protecting the people of New York State. Murder, Rape, and Drugs are totally out of control-There has never been a more dangerous time than this. She is grossly incompetent, her staff knows it, and so does everyone else. MAKE NEW YORK SAFE AGAIN!!!”

I have no idea why he refers to her as “peekaboo”. And so far no one online seems to be able to figure it out. Some believe it could be a code word for a very racist term for black people that begins with a “j”, but others do not believe he would ever be that openly racist, including Michael Cohen. 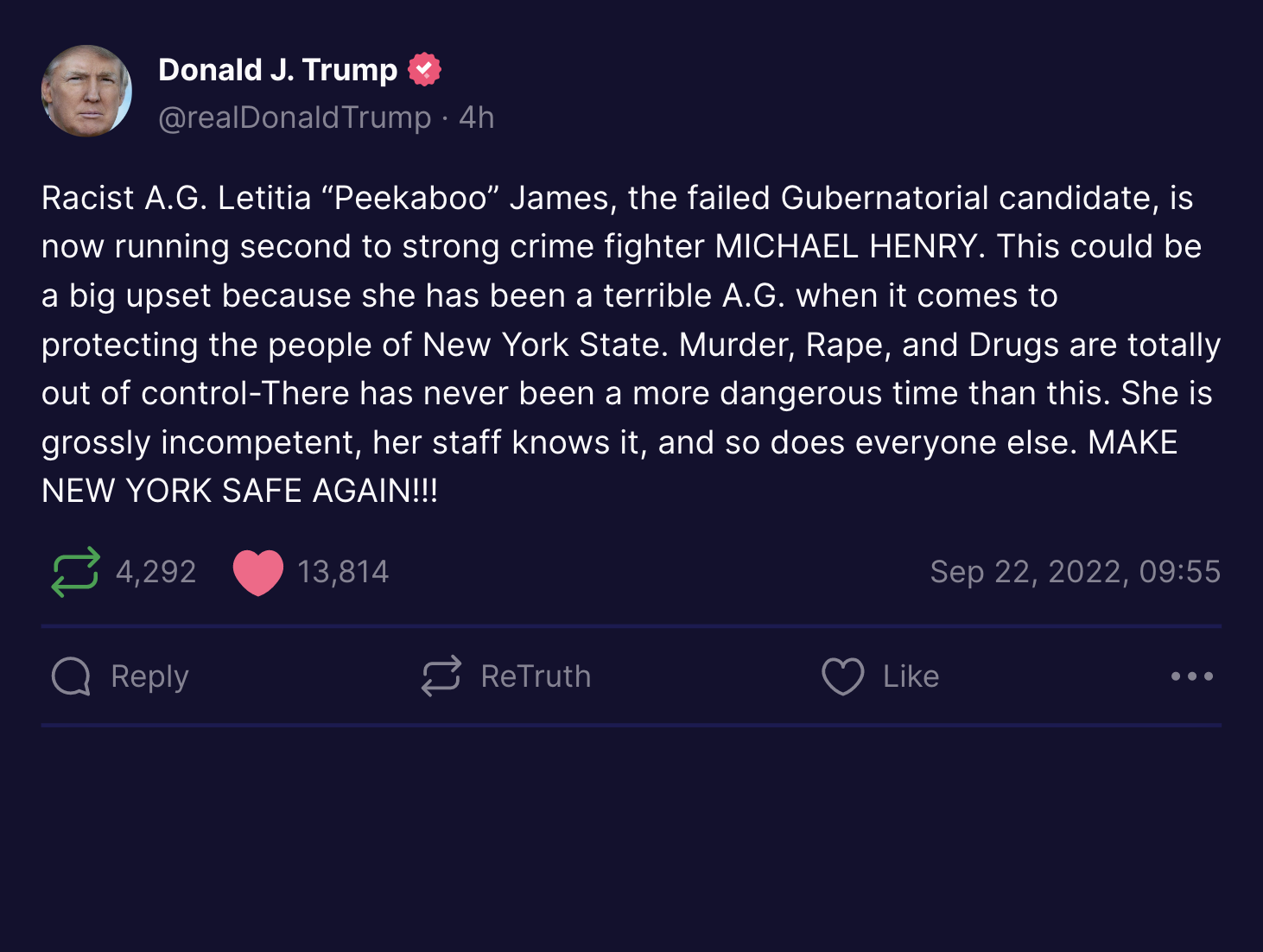 Trump then posted a bunch of tweets, basically saying he the case filed by AG James should’ve never been filed:

And now we wait for whatever he posts tonight, which is when he’s usually most active. No doubt, Trump is worried. You can tell by the content he posts. The man is terribly transparent. People defending him, knocking the lawsuits against him, Trump is scared. And rightfully so.