Florida GOP governor, Ron DeSantis is supporting bigotry and lies thanks to a mailer that his campaign recently sent out to voters as the midterm elections loom.

The mailer derides DeSantis’s Democratic opponent, Charlie Crist, with a barrage of misinformation, including one whopper that claims President Joe Biden’s student loan plan will force “hard-working Floridians to pay back student loans for degrees like Gender Studies and French Poetry.”

A Fort Lauderdale resident shared the mailer with HuffPost, and it shows a photo of Crist and Biden embracing, with a line right below that reads “The Biden-Crist College Loan Bailout will: Make inflation worse; Punish hard-working taxpayers; Reward universities.”

Also in the mailer: A photo of a student wearing makeup as part of their graduation ceremony. There’s a speech bubble above the student’s head and it reads “Thank you, Joe Biden and Charlie Crist, for making Floridians pay off my student debt. The photo looks like a doctored stock image of a nonbinary student at graduation.

Unfortunately, DeSantis stands a good chance of winning the election since he has a nearly 10 percent lead over Crist. It’s sad that people vote for bigots like DeSantis, but what can I say? This is Florida, after all. Land of Republican hypocrisy. And some people are also taking DeSantis to task for running for reelection when according to HuffPost “it is well known he will likely run for president in 2024.”

“That this ad and others like it are running in 2022, not 1970, tells us the kind of future envisioned by DeSantis and his right-wing cronies,” notes Brandon Wolf, press secretary for Equality Florida, an LGBTQ civil rights organization.

“These extremists are hell-bent on returning us to the darkest days of anti-LGBTQ hysteria that fueled discrimination, bigotry, and violence against the community,” Wolf said. “The war they are waging against equality — and LGBTQ Floridians — is dangerous, cynical, and should be condemned by all who want to see a Florida that is more inclusive of and safe for all people.”

This type of bigoted rhetoric is not new to DeSantis, who continues to do whatever he can to spur culture wars that cause considerable harm to LGBTQ kids and adults. This includes signing the “Don’t Say Gay,” bill earlier this year. That legislation bars teachers from talking about sexual orientation and gender identity in most elementary school classes. The legislation provoked plenty of outrage across the country. LGBTQ advocates criticized it as hateful and discriminatory.

Because, well, it is.

And of course, since DeSantis has managed to successfully demean and erase people in the LGBTQ community, he’s campaigning on the same issues. This recent flier isn’t the obnoxious one he’s sent that mocks gender studies majors and others who are interested in gender-related issues. Another mailing, sent in October claims that Crist is forgiving student loans for gender studies majors who have used the money on piercings and tattoos.

That is patently absurd.

“I went into debt getting my Gender Studies degree,” the mailer reads, according to Florida Politics. “Thanks to Charlie Crist, taxpayers are bailing me out.” The mailer includes a photo of a white woman studded with piercings.

As if that weren’t disgusting enough, DeSantis also sent voters a mailer that stirred fears about transgender athletes taking away opportunities for cisgender women by comparing the situation to what happened when Black athletes were allowed to enter professional sports.

DeSantis’s hateful emails have resulted in an angry smackdown from Biden while he was campaigning for Crist earlier this week, castigating the Florida governor for “demonizing the LGBTQ population.” The President also suggested DeSantis is Trump 2.0 and reminded people that if DeSantis wins in 2022, he’ll simply leave to run for president in 2024.

The fact that DeSantis continues to do well in the polls is depressing because it’s likely that if he’s reelected he’ll continue to foment misinformation and hate toward the LGBTQ community. And Republicans like Marjorie Taylor Greene, who’s vehemently anti-LGBTQ have made the situation worse.

These truly are sad times. Let’s hope they don’t turn out to be tragic. 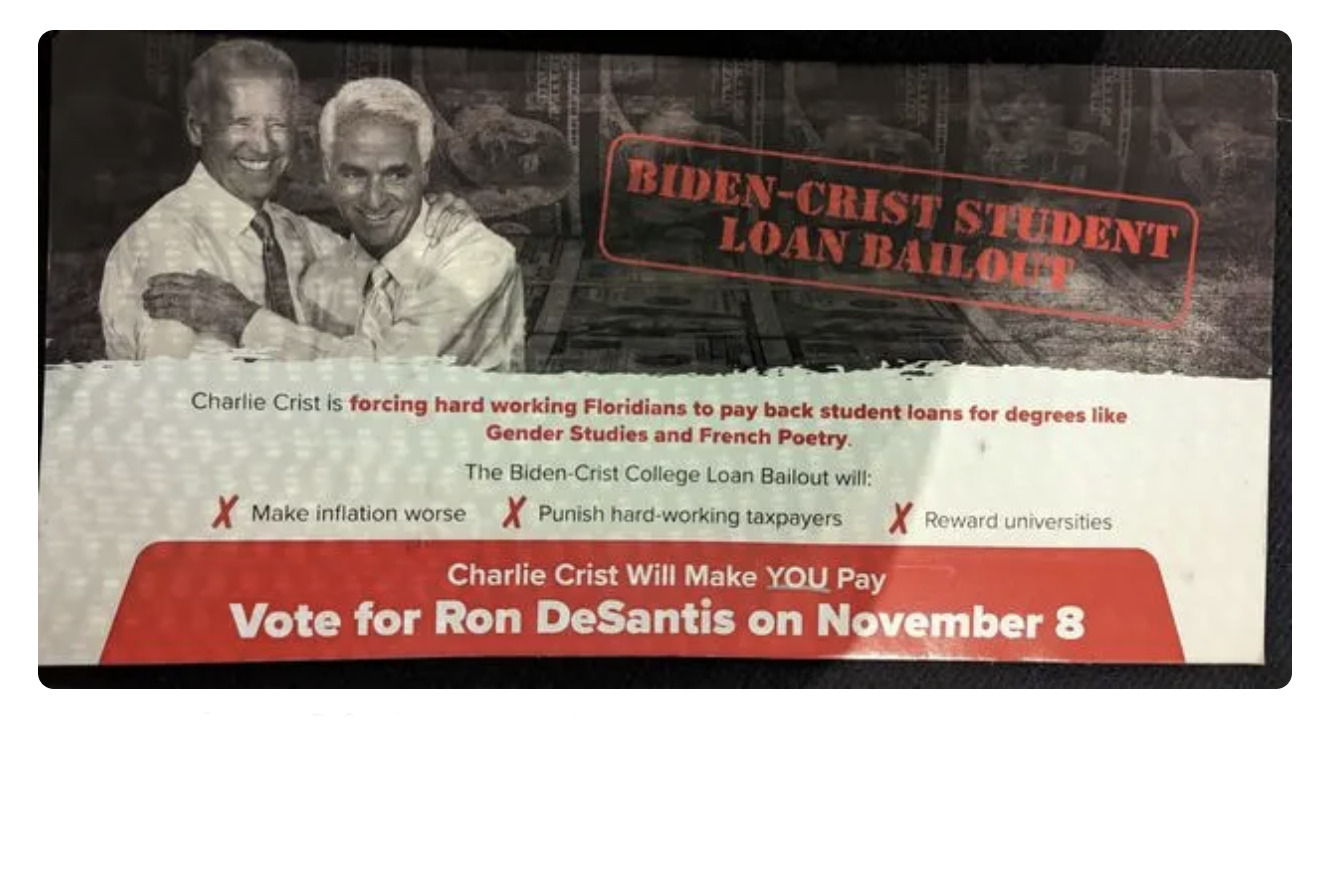