Denis Langlois is the mayor of Fort Ann New York. The community of 6,500 residents is in upstate New York. Langlois has come under criticism for a message posted on Facebook ahead of Tuesday’s midterm elections. The mayor called Democratic voters “retarded” before resident’s headed to the polls.

Langlois posted on Facebook writing, “If anyone that I know vote [sic] for a Democrat on Tuesday you should sign yourself into the Mental Health unit at your local Hospital because you are retarded and need help, Vote Republican and ‘Keep America Great’!” 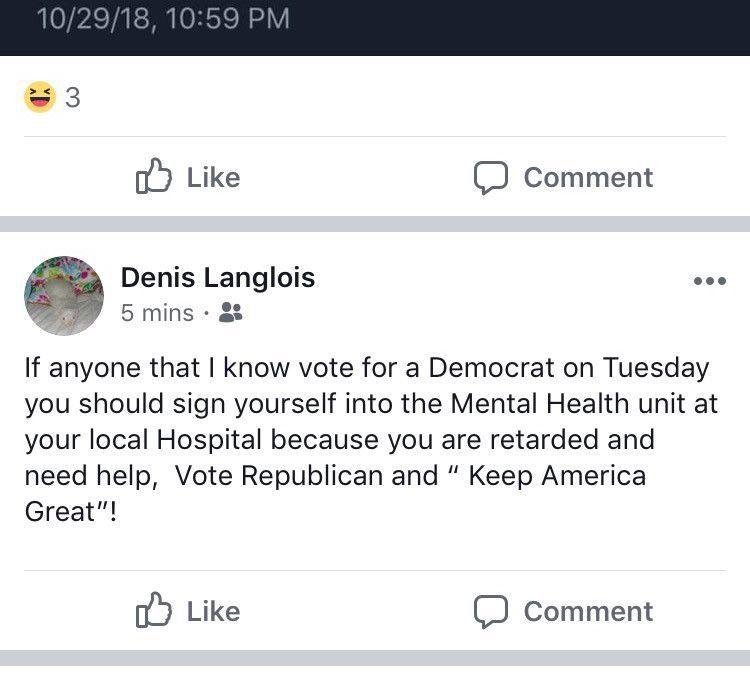 In the wake of the post, Langlois has received negative backlash, but that has not made him question his comment. He told the Post Star that he has “no regrets” about the message he sent voters.

Mayor Langlois also told the newspaper that he did not remember writing the post and insisted that his comment was made in his capacity as a private citizen, not in his official capacity as mayor. He said, “I’m not doing it as an official, I’m doing it as a person.” He went on, “You can’t quote me as the mayor, you can only quote me as a person.” He added,  “Most people don’t even know I’m the mayor. Nobody cares anymore. That’s the problem with America today.”

Langlois has since removed the post from Facebook. Most people recognize that the word “retarded” is offensive. Organizations like Best Buddies and the Special Olympics agree that the word is inappropriate and offensive.

Susan Collins Mocked for Whining After Sen. Ossoff Brutally Calls Her Out Over Her Hypocrisy on Voting Rights

5 days ago
We use cookies on our website to give you the most relevant experience by remembering your preferences and repeat visits. By clicking “Accept”, you consent to the use of ALL the cookies.
Do not sell my personal information.
Cookie SettingsAccept
Manage consent