Trump was reacting on Friday to a Twitter user who commented on The Washington Post’s front page of the print edition.

Atkins, who is the founder of a fantasy football league, tweeted: “This is why nobody but the @DNC circle jerk takes this seriously anymore.”

“That front page is a disgrace but in its disgrace, many wake up.” 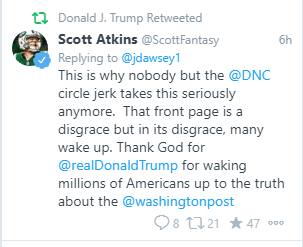 There was widespread reaction on Twitter to the president retweeting a post with the word “circle jerk.”

“Imagine this will be the first time “circle jerk” is preserved in the Presidential Records Act, but maybe not?” Josh Dawsey, a White House reporter for the Post whose tweet initially drew the ire of Atkins, tweeted on Friday.

Imagine this will be the first time "circle jerk" is preserved in the Presidential Records Act, but maybe not? https://t.co/AfTpr8vSgm

“If you had asked me on Monday if the week would conclude with the president retweeting a man with a fantasy football business yelling at [Josh Dawsey] I would have said “that sounds right”,” journalist Olivia Nuzzi tweeted.

Michael Del Moro tweeted: “Feel like I need to break my Twitter vacation to point out that the President of the United States just retweeted the phrase “circle jerk”.”

Feel like I need to break my Twitter vacation to point out that the President of the United States just retweeted the phrase “circle jerk.” pic.twitter.com/yXQwElgErE

Others were rightfully disgusted:

Today, Trump tweeted ‘bullshit’ and retweeted a tweet with ‘circle jerk’ in it

Next time the religious right talks about morals in politics, please remind them of Trump’s behavior on Good Friday 2019

Today brings us both "bullshit" and "circle jerk" on Trump's official Twitter feed.

I remember when Republicans were outraged at the idea of a president who "disrespected" the "dignity" of the Office by wearing a tan suit and putting his feet up on the Resolute Desk. pic.twitter.com/UuW11hCHbV

Trump retweeted a tweet with "circle jerk" in it. Right around the time he was golfing with Rush Limbaugh.

It's Good Friday, so I guess we should note that Trump is promoting a tweet referring to a "DNC circle jerk" and putting targets on the backs of the NYTimes and WaPost.

I've said it 20 times before: There is no bottom to this presidency until it's over https://t.co/HamHzs9qPE pic.twitter.com/F1AGq1qTro