Godwin’s Law states that as an Internet discussion grows longer, “the probability of a comparison involving Nazis or Hitler increases, and whoever makes that comparison has automatically ‘lost’ said debate.”

Extending this axiom to the current state of American public discourse prompts a question: Should critics of a political figure who reflexively evoke Hitler be considered losers? The answer? Absolutely.

Case in point: Harvard Law professor Laurence Tribe, who has earned a well-known track record for vociferously promoting anti-Trump rhetoric and legal insights via his Twitter feed, writing, and occasional cable news appearances. And while he is often dismissed as partisan, he is often respected as well-informed and, well, a great legal mind.

On Tuesday, however, he seemed to cross a line that many will seem to be a perhaps unforgivable stretch: he compared the physical likeness and behavior of President Donald Trump and Adolph Hitler. For good literary measure, a quote from Voltaire is included that reads “Those who can make you believe absurdities, can make you commit atrocities.”

It was actually a retweet of a meme posted by the heretofore unknown Twitter user @wvjoe911, who also goes by the custom Twitter username “JoeinWV” with American flags and wave emoji on either side. (The tweet has since been deleted so here is a screenshot). 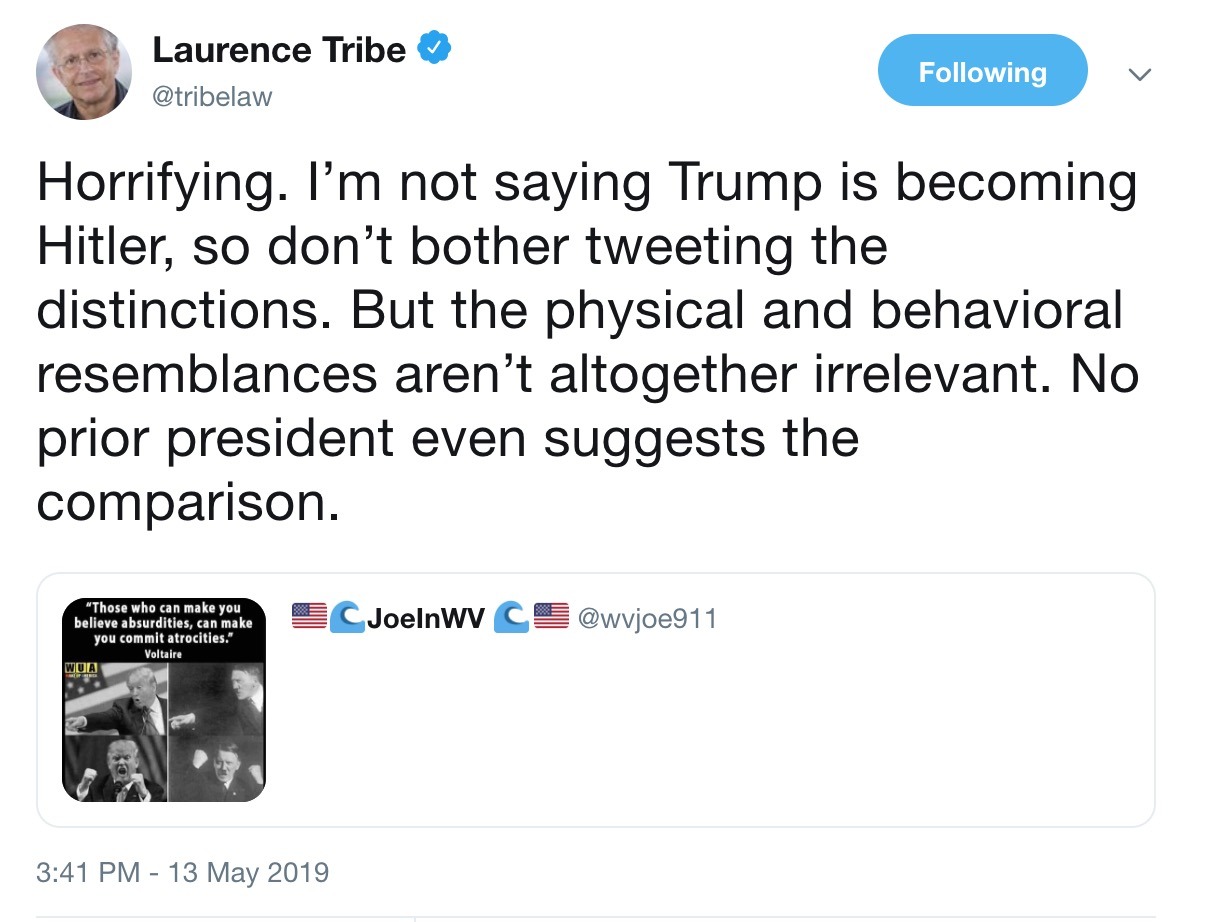 As you can read in the tweet written by the Twitter-verified Tribe account, the Harvard professor is “not saying Trump is becoming Hitler, so don’t bother tweeting distinctions.” He then notes the “physical and behavioral resemblances” claiming that they “aren’t altogether irrelevant.”

So he’s not comparing Trump to Hitler in this very clear comparison of Trump and Hitler.

What do you think, is Trump like Hitler? Or is that an unfair stretch?

General ‘Mad Dog’ Mattis FINALLY Speaks: You Can Support Trump or Your Country — Not Both

Trump Said He Only Visited Bunker for an ‘Inspection’ — Turns Out That’s a Lie, He WAS In Bunker Friday Night