Back in early June, Donald Trump slammed actress/singer Bette Midler as a “sick scammer” for sharing a statement on Twitter falsely attributed to the commander-in-chief.

Trump tweeted the quote on Monday morning from an account purporting to represent the Reagan Battalion — a conservative news site. Only, the account was phony, and so too was the quote it tweeted on Feb. 20, 2017 — superimposed over a picture of Trump and Reagan shaking hands.

“For the life of me, and I’ll never know how to explain it, when I met that young man, I felt like I was the one shaking hands with the president,” Reagan allegedly said. 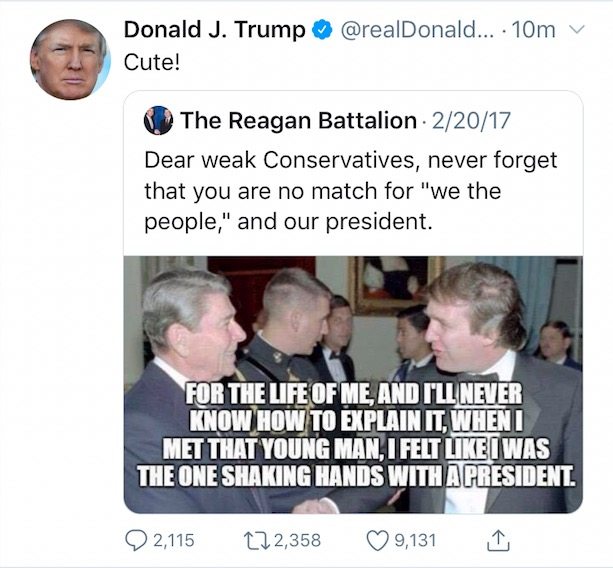 But according to the fact-checking outlet Politifact, Reagan never made that comment. Joanne Drake, chief administrative officer of the Ronald Reagan Presidential Foundation and Institute, told Politifact that while the photo of the handshake is authentic, the comments are not.

“He did not ever say that about Donald Trump,” Drake told Politifact.

You attacked Bette Midler over a fake quote but you are sharing a proven fake quote ?

Sir, you've been quite silent about the Jeffrey Epstein indictment. Many people believe that you violently raped Katie Johnson, a 13-year-old girl you met through Epstein at his mansion.