Trump Refusing to Speak to Congresswoman from El Paso, ‘Too Busy to Speak’

Donald Trump is preparing to visit El Paso and Dayton, Ohio, on Wednesday, appearances that will not be universally welcome as the two cities grieve from weekend mass shootings that left 31 dead and many injured and rattled.

Trump confirmed this trip with a tweet on Tuesday:

Will be going to Dayton, Ohio and El Paso, Texas, tomorrow to meet with First Responders, Law Enforcement, and some of the victims of the terrible shootings.

Several Democratic officials have urged Trump not to visit El Paso, a city of about 683,000 with a largely Latino population, in the aftermath of Saturday’s anti-immigrant attack at a Walmart Supercenter that left 22 dead.

Democratic congresswoman Veronica Escobar requested a private call with Trump on Tuesday, but she was refused.

I was told that @realDonaldTrump is “too busy” to have that conversation.

I declined the invitation because I refuse to be an accessory to his visit. I refuse to join without a dialogue about the pain his racist and hateful words & actions have caused our community and country.

For the record, here was Trump’s schedule today: 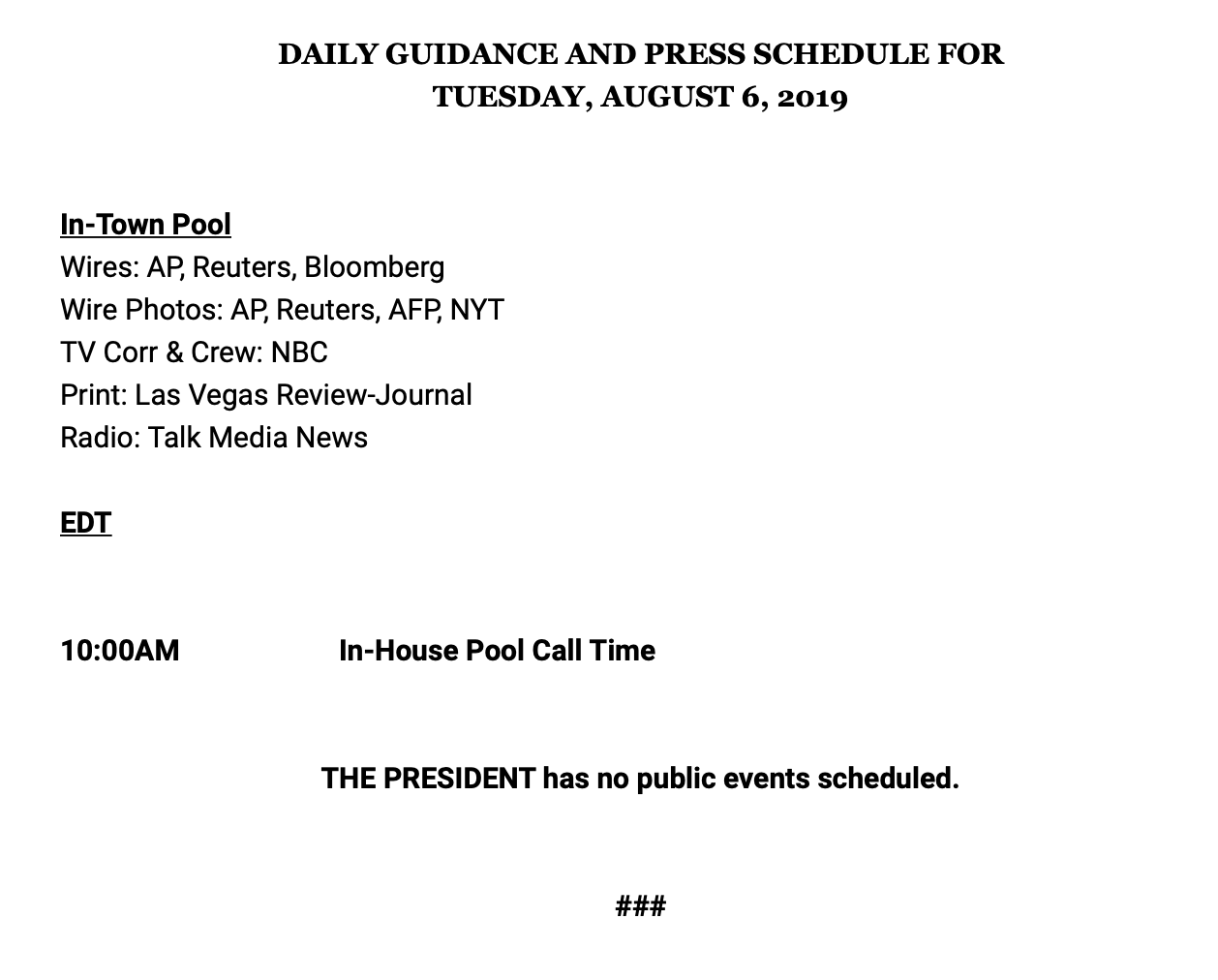 Officials in El Paso are still investigating but believe the alleged gunman posted a manifesto that echoed Trump’s harsh rhetoric on immigrants, notably describing his attack as “a response to the Hispanic invasion of Texas.”

“This president, who helped create the hatred that made Saturday’s tragedy possible, should not come to El Paso,” former Democratic congressman Beto O’Rourke tweeted late Monday afternoon. “We do not need more division. We need to heal. He has no place here.”

So Donald trump said he was too busy to meet with Rep Escobar..

Yall he should not be allowed anywhere near El Paso..

The president of the United States is too busy to have a conversation with an elected official from the district where a MASS MURDER just took place?! #1 he's not too busy he's the laziest fat fck on the planet & #2… oh never mind @realDonaldTrump is just a lazy fat Fck. https://t.co/dkEb9z4mfO

Escobar, a backer of an impeachment inquiry, asked for a private call with the president but the WH said Trump – who didn’t have anything on his public schedule today – was too busy to talk. She said she won’t show up tomorrow because “I refuse to be an accessory to his visit” https://t.co/deOCgN21hR