Donald Trump is an extremely weird man, with a lot of weird characteristics.

One thing you may not have noticed though, is that Trump often has abnormally large pupils. And according to ophthalmologist Dr. Jack Brown, this is incredibly worrisome.

Brown uses this photo of Trump to illustrate his concerns: 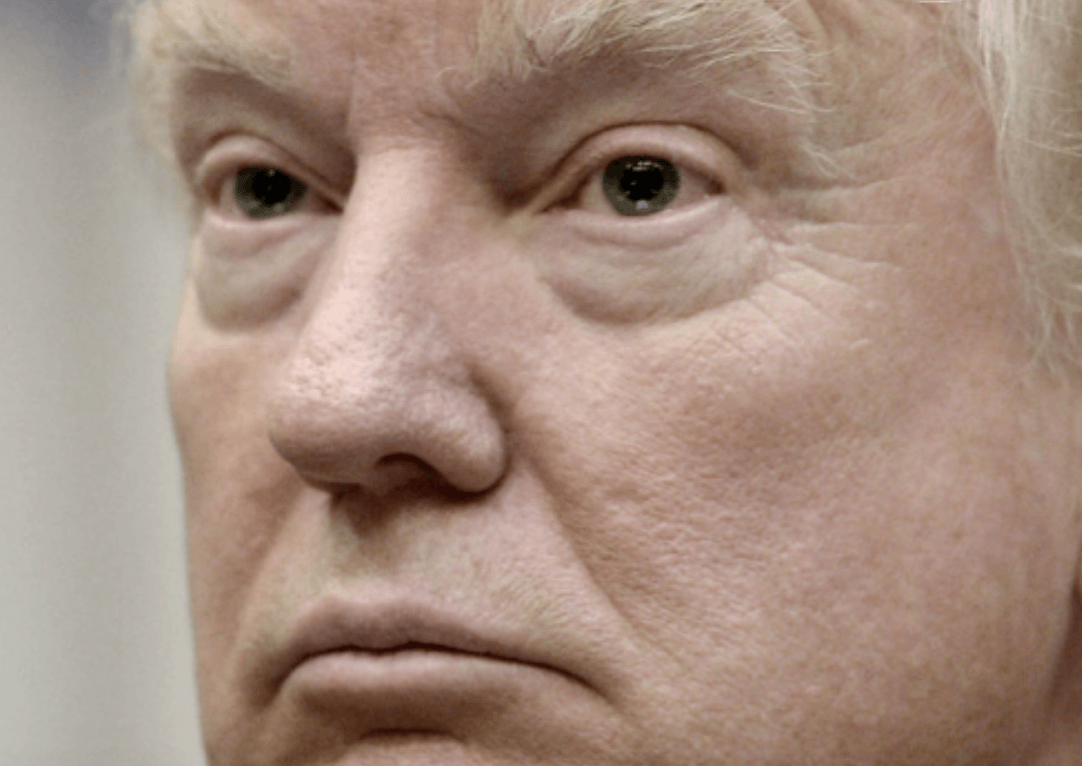 According to Brown, in that image Trump’s pupils are approximately 8.0 mm. The dark-adapted eyes of a healthy 12-year-old may have 8.0 mm pupils — but in an unmedicated 70-year-old with healthy eyes, in a well-lit room — the statistical odds of such large pupil size approaches zero.

Why is this significant? Dilated pupils, to this degree, would not occur in a 70-year-old, in a well-lit room unless there is either disease, injury or a pharmacologic cause present. Trump’s pupils are frequently but intermittently this large (sometimes they are indeed within normal size limits).

Trump’s enlarged pupils are much less likely a sign of a significant undiagnosed or undisclosed medical condition — and much more likely, a side effect of a drug/medication (one of a relatively small group of drugs).

Brown states that Trump’s large pupils are most likely due to a medication.

Some of those medications include:

Brown sums it up by stating:

President Donald Trump’s pupils are intermittently and significantly dilated — from a medical standpoint, this is NOT normal. The ambient light conditions cannot account for such changes. At other times they are within normal limits. This intermittent pattern is NOT due to trauma, complications from surgery, or disease. I have not examined Donald Trump and I have no firsthand knowledge of him — however, the myriad of photographic evidence available online seems to point strongly to the remaining possible etiology — Donald Trump’s Intermittently Dilated Pupils are due to the side effects of drugs/medications.

He's in front of cameras, bright lights all around him and his pupils should be small. Given his age, our pupils may be more sluggish in dilation, constriction time but this doesn't fit the category.
This is drugs. A upper.

COKE HEAD. MANDATORY DRUG TEST SHOULD BE GIVEN NOW.

As a school nurse that hands out Adderall all day to children, let me tell you, he's high AF on the stuff.

Pupils should never be that large in a room with so many lights, as he was in. Definitely the drugs at work here.

Adderall mainly stimulates the sympathetic nervous system, which triggers the body's "fight or flight" responses, such as pupil dilation

ADHD Drugs, Adderall, Ritalin or generic amphetamine salts make you alert but focused which is how Trump presented himself. It's not Dexedrine/illicit cocaine & other speed drugs. He presents classic side effects: enlarged pupils, cottonmouth, &habitual sniffing nasal drips. pic.twitter.com/y6bKKJbxsr

Failing health sure was the story when Secretary Clinton had pneumonia and stumbled.

'Pupils extremely dilated in bright light. Is he fit for office?' https://t.co/lCfB2rOQpw

The dude is seriously strung out on drugs. The sniffling. The dilated pupils. The cotton mouth. The lack of comprehension of what he reads off the prompter. He says Dayton then 5 minutes later Toledo. Trump is a junkie. Time for the #TrumpDrugTest.

So I think trump needs to have a drug test. Apparently he needs drugs to read a TelePrompTer and not go off script. His slured words, dry mouth, and dilated pupils say it all. He’s high as a kite. Why is no one talking about his Adderall addiction? #adderall #trumpishigh

After all of Trump's sniffing, licking his lips, squinting, the Toledo fuck up and dilated pupils this morning, it's time for the #TrumpDrugTest.

We Live-Blogged Trump’s Rally and It Was Horrifying, Full of Lies, and Flat-Out Dangerous

11 Cases of Coronavirus Found in TEXAS: Planes Trump Ordered Back Landed in California and Texas