Donald Trump has had a rough summer. Heck, just look at his August, his September!

Let’s take a look at the past few weeks.

Axios reported that on multiple occasions, Trump has suggested to aides that we try to stop hurricanes by dropping nuclear bombs on them. “You could hear a gnat fart in that meeting,” a person present on one such occasion told them. “People were astonished. After the meeting ended, we thought, ‘What the f—? What do we do with this?’”

Trump suggested that we buy Greenland from the Danes; amid worldwide mockery, the Danish prime minister called the idea “absurd,” and a petulant Trump responded by cancelling a scheduled trip to Denmark, saying the prime minister was “nasty,” a word he often uses to describe women who contradict him.

He tweeted that “American companies are hereby ordered to immediately start looking for an alternative to China.” The president has no power to “hereby order” private companies to stop dealing with a foreign country, let alone by tweet.

He repeatedly mused that America’s involvement in Afghanistan could be ended very easily by committing the worst genocide in human history, but noted that he has decided against that particular strategy.

In the midst of a tirade on trade with China, he looked to the heavens and said, “I am the chosen one!”

So, if I told you Trump retweeted an article about human cannibalism, would you even be surprised at this point? 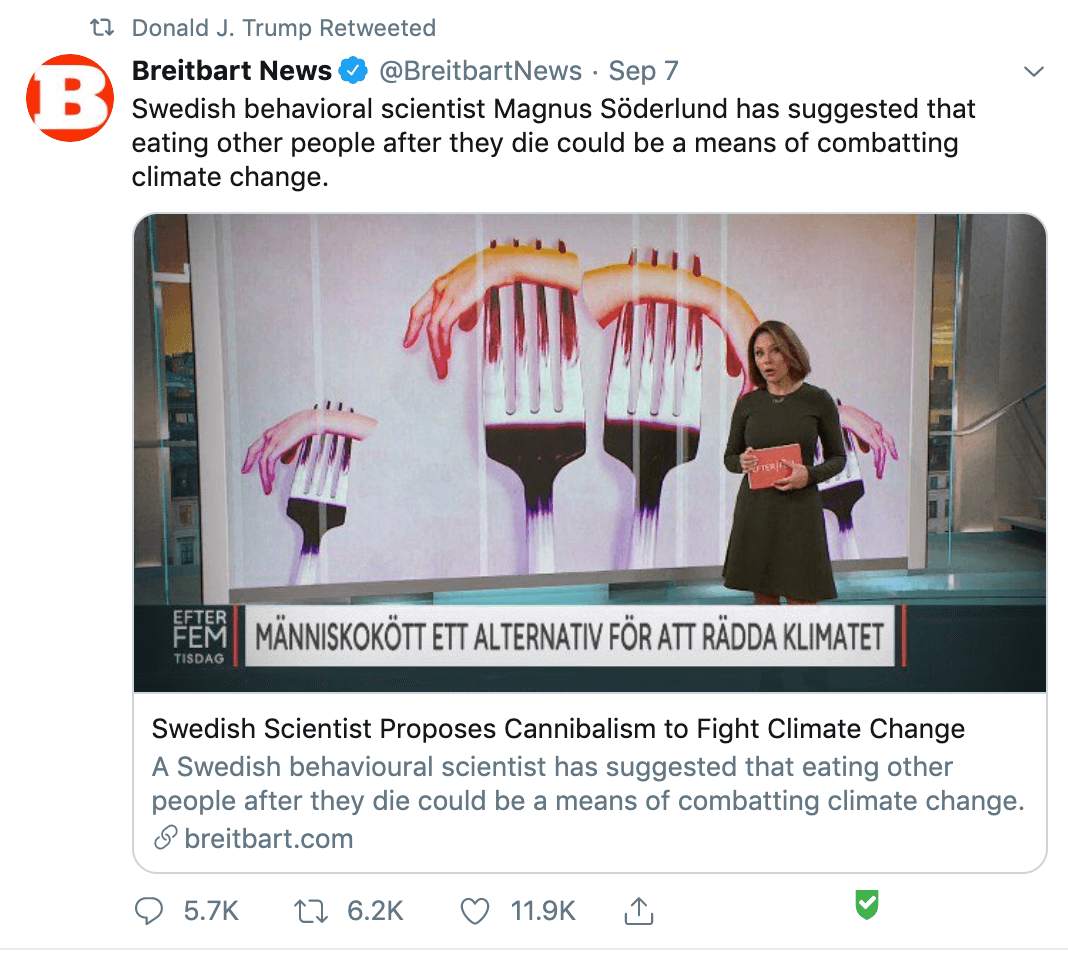 The article Trump retweeted was from the alt-right publication Breitbart, and discussed a Swedish scientist opining that people eating other people is a good way to combat climate change.

Donald Trump just tweeted a Breitbart article about cannibalism, and it’s not even the most fucked up thing he’s tweeted today.

we're now at the "retweeting about cannibalism" stage of the Donald Trump presidency pic.twitter.com/9hGuDIjlq1

Trump is promoting…cannibalism as a way to combat climate change.

I’m not kidding. This image below is of an actual retweet on his account.#SoylentGreen pic.twitter.com/FXRVANsfVl

Trump is retweeting articles advocating cannibalism. This is the world we live in. Even Hannibal would think it rude. pic.twitter.com/PVC0uJvSB7

I can't even believe my own eyes. You thought Trump's #sharpiegate cat video was baffling. Check out his Breitbart RT claiming a Swedish scientist believes "cannibalism" will play a part in a future affected by climate change. This tweet is now part of the presidential record pic.twitter.com/hjO0QfJyPY