We don’t often see Melania Trump’s parents in public, but they are a huge part of Melania and son Barron’s daily life.

According to the New York Times, Viktor and Amalija Knavs split their time among an apartment in Trump Tower, Donald Trump’s Mar-a-Lago club in Florida and the suite in the White House once used by Michelle Obama’s mother.

Conservatives even claimed that Marian Johnson would receive a pension of $160,000 per year for her role in taking care of her grandchildren, but that was repeatedly proven false.

However, do the Knavs actually spend much time at the White House?’

There is a rumor that the Knaus’ have a home in Potomac, Maryland, near grandson Barron’s school, and that Melania Trump lives there as well most of the time.

The White House denies this rumor.

However, let’s take a look at it.

Serious question: Do Melania and Barron still live at the White House?

The other thing is…undoubtedly the White House press corps knows the answer. I agree Barron specifics should be off limits. But if the Trump is holing up in residence, increasingly paranoid of aides AND essentially not seeing wife and teenage child…America should know.

Potomac is 45 minutes from the White House. Yet, we never hear of any motorcades taking Barron to school every day. No paparazzi shots of them going to school…nothing. We knew the Obama girls went to Sidwell Friends School.

We actually saw photos of the Obamas occasionally taking their girls to school: 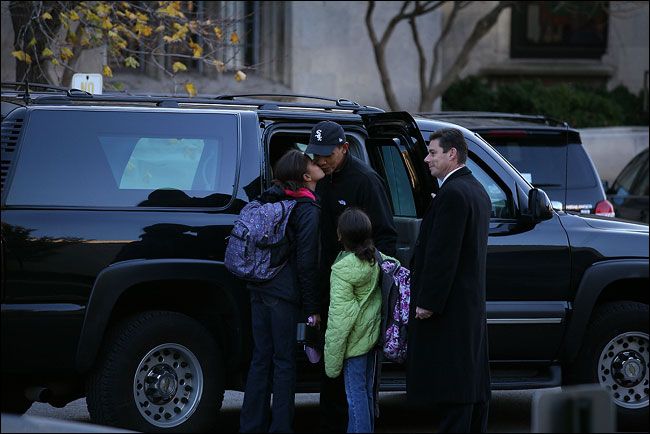 So, what is going on? I think it’s best to lay off Barron, he’s a kid and this isn’t his choice.

Most of the country does not know that Melania does not live in the WH. Everyone in our Potomac-DC-McLean area knows. Going to the WH for events only is her job. She lives with her parents and son near her son’s school in Potomac, MD, 21 miles from the WH.

Melania doesn’t live with trump in the White House. She and their son live with her parents in Maryland. She knows nothing about him, and she doesn’t care. https://t.co/l0cvgxpc3G

Rumor is that Trump rarely even sees the boy. Barron is apparently being raised by Melania’s parents and does not live at the White House. He lives with his maternal grandparents in Maryland.

Where was Melania? Oh she was home in Maryland! Got it! https://t.co/p0eJKsl8xZ

Ivanka is the daughter wife. Melania’s primary residence is with her parents and Barron in Maryland. She gets pulled out and dusted off for important events.