AMERICA LAST: Melania Trump Does Not Like Wearing Clothes From American Designers

I didn’t really learn much about Melania Trump, as she is a notoriously private woman and it appears Bennett was unable to obtain any sources that could provide us with more juicy information.

We did learn that Donald and Melania Trump sleep in different bedrooms, but that’s not new and hardly a surprise.

One of the main focuses of the book is fashion, and what Melania wears.

The first lady has rarely spoken about the reasoning behind her fashion choices. Her own stylist for the 2019 state-of-the- union address said he focused on the look rather than sending a political message.

Overall, Bennett wrote that she believes there are no coincidences when it comes to the first lady’s fashion choices. “Having covered her for as long as I have, each thing she does has meaning to it, even the clothing she wears,” Bennett wrote.

For instance, there was that disastrous Africa trip where Melania took an “almost costume-like” approach to dressing for a safari in Kenya. 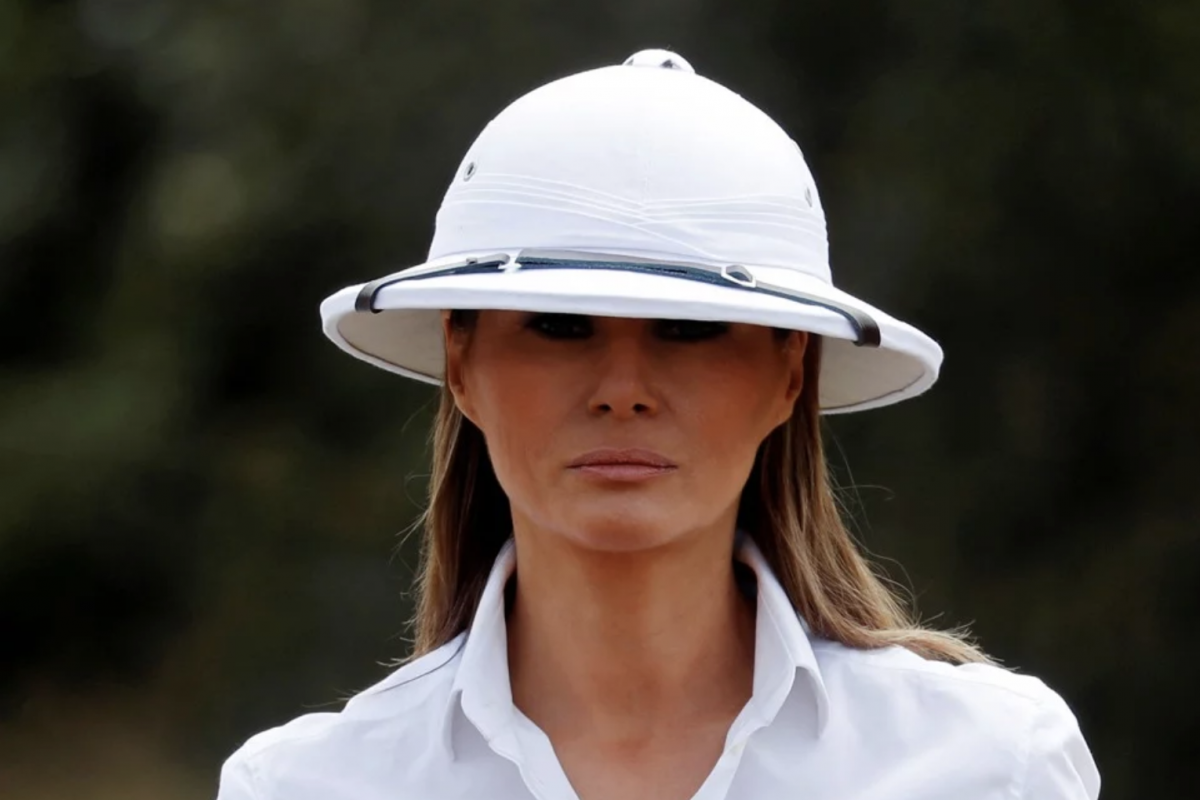 Bennett wrote that Melania’s October 2018 look, which included jodhpur pants, brown boots, and a pith helmet, seemed straight out of a movie. The outfit also caught the eye of critics, who connected the hat to its roots in colonialism that had invaded the continent, making the outfit a massive miss despite the intention.

But one of the more fascinating things I learned from Bennett’s book is that Melania doesn’t really like wearing clothes from American designers, which is something that her predecessor Michelle Obama did as often as she could.

Let’s take a look at Melania’s official portrait in all its photoshopped glory: 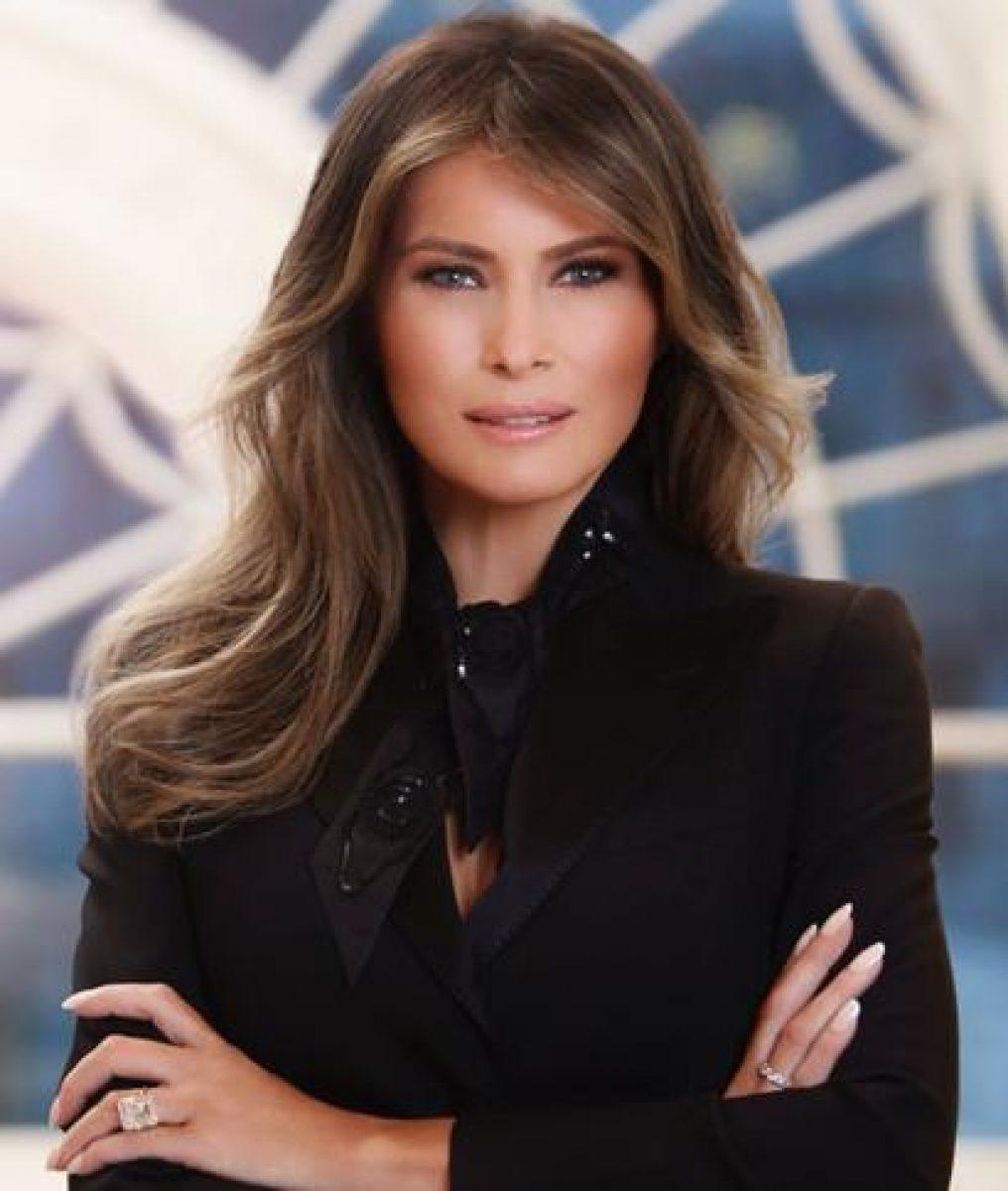 In this most important photo, Melania didn’t choose an American designer as previous first ladies did. Melania chose Italian designer Dolce and Gabbana.

From Bennett’s book on traveling overseas:

“Traditionally, first ladies will showcase American designers as much as they can, especially on trips abroad. Michelle Obama was particularly good at selecting designers who were American but had origin in or connection to the country she was visiting. Melania has little care for those rules—again, she’s not prone to doing anything that feels inauthentic to her, even if that means wearing an international designer in Trump’s “America First” world.”

However, she hasn’t shut out American designers entirely. The powder blue suit she wore on inauguration day was designed by Ralph Lauren. 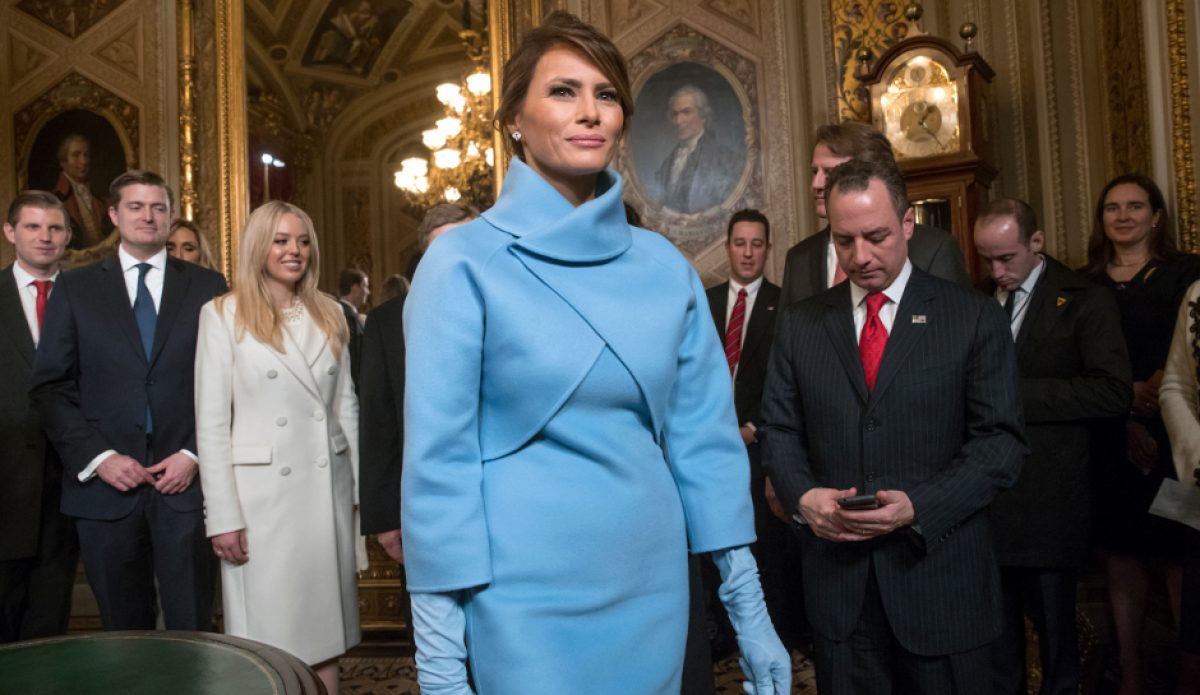 During his inaugural address, Donald Trump declared, “We will follow two simple rules: buy American and hire American.” Yet, it appears that the first rule does not apply to his wife Melania.

Carl Sferrazza Anthony, historian at the National First Ladies Library in Canton, Ohio, and author of a dozen books on first ladies, believes it has something to do with the fashion community’s backlash against all things Trump following his election in November.

“All these American designers came out saying they wouldn’t provide clothes for Melania if she asked,” Sferrazza Anthony said. “Those fashion designers were making a very public political statement.”

Wearing an American designed frock from a house whose designer or customers may not be pro-Trump “could generate enough negative publicity to seriously harm the brand.”

Indeed, when news broke that Ralph Lauren provided inauguration Melania’s ensemble—despite the fact that he also dressed Hillary Clinton for the inauguration and has never voiced his political leanings—his company received complaints from the public, and the hashtag #BoycottRalphLauren trended across social media.