Donald Trump’s crazy governing style is almost as tumultuous as his easily windswept hairstyle…and perhaps that’s because he’s relying on a budget product to keep his hair in check.

In his book “Team of Vipers”, former White House communications aide Cliff Sims describes “how absolutely out of control the White House staff … was at times,” per a copy obtained by The Washington Post. But Sims did attempt to keep at least one thing in check, as the Post described from the book below.

As White House director of message strategy, Sims regularly met Trump at the private elevator of the residence and accompanied him to video tapings — carrying a can of Tresemmé Tres Two hair spray, extra hold, for the boss.

Judging from the numerous times Trump’s hair has been blown off course, it’s no wonder Sims was eventually reassigned to the State Department after more than a year in the White House. Hopefully by now, Trump has upgraded from a spray you can get for $2.74 at Walmart.

While he’s at Walmart, Trump can pick up some bobby pins, because he’s been known to use those as well to keep those golden locks in check.

Trump’s signature hairstyle is often the talk of the town, and is known to have a mind of its own. Just last week when Trump appeared on Capitol Hill for a luncheon with Republicans, his hair tried to make a run for it: 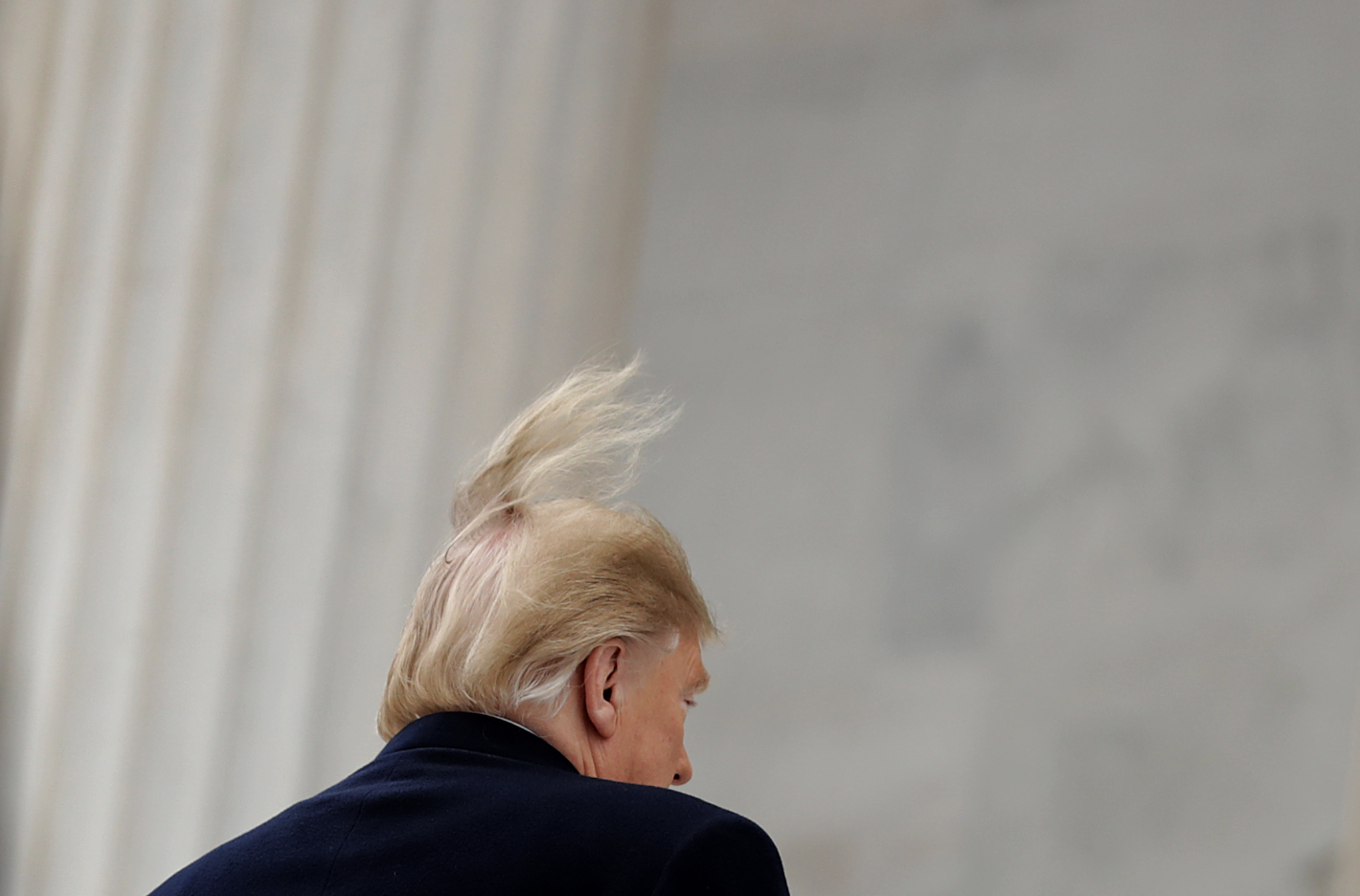 One of our favorites was when Trump’s hair completely revealed Trump’s bald spot:

#TrumpBald #Trump #TrumpHair @realDonaldTrump Hates the wind as it reveals Trump is bald despite meds to halt that. @POTUS @WhiteHouse
Everyone can have good LAUGH. @Lawrence @foxandfriends pic.twitter.com/srhyAABpZW

In his defense. .the rain and wind plays havoc on his hair. pic.twitter.com/d4zqDAWdtl

Ivanka Trump has also previously revealed the “secret” behind Trump’s questionable do, according to Michael Wolff’s book “Fire and Fury: Inside Trump’s White House”:

For Ivanka, it was all business — building the Trump brand, the presidential campaign, and now the White House. She treated her father with a degree of detachment, even irony, going so far as to make fun of his comb-over to others. She often described the mechanics behind it to friends: an absolutely clean pate — a contained island after scalp-reduction ­surgery — surrounded by a furry circle of hair around the sides and front, from which all ends are drawn up to meet in the center and then swept back and secured by a stiffening spray. The color, she would point out to comical effect, was from a product called Just for Men — the longer it was left on, the darker it got. Impatience resulted in Trump’s orange-blond hair color.

So, it would seem the president’s hair is not, in fact, a toupee, nor is it an obedient Persian cat holding very still on the top of his head — it is real, human hair, manipulated into a shape that defies all earthly logic…with cheap hairspray.

Mike Pence to Pope Francis: “You Have Made Me a Hero!’