Donald Trump has quite a sordid past when it comes to women, and one woman in particular really rocked Trump’s world.

Not familiar with the name? Here’s a little primer.

Bruni-Sarkosy was a very well-known supermodel, originally from Italy. She was a staple of the European runways, and had relationships with many famous men, including Mick Jagger, and eventually married former French president Nicolas Sarkozy.

And Ms. Bruni-Sarkozy also has a past with Donald Trump, although that past varies depending on who you ask about it.

On the morning of June 26, 1991, Donald Trump’s picture was splashed across the front page of the New York Post. Next to the photo, which featured his then-girlfriend Marla Maples, was the headline “IT’S OVER.”

Trump, according to the Post, was leaving Maples for the Italian model (and future first lady of France) Carla Bruni. That morning, NBC’s Today ran with the report.

“And Donald Trump is reportedly breaking up with Marla Maples, the woman said to have come between him and his wife Ivana,” anchor Doreen Gentzler announced. “The New York Post is reporting that she’s been ordered out of Trump’s luxury high-rise apartment and that Trump has begun dating an Italian model named Carla Bruni.”

Trump confirmed to the Post the next day that Bruni was the “new one” in his life. Bruni, however, vehemently denied she was dating Trump, and according to one biography, Trump himself planted the story for publicity.

So Trump simply lied about dating Bruni, telling the Post that Bruni dumped Mick Jagger for him. And Marla Maples even took Trump back after this! 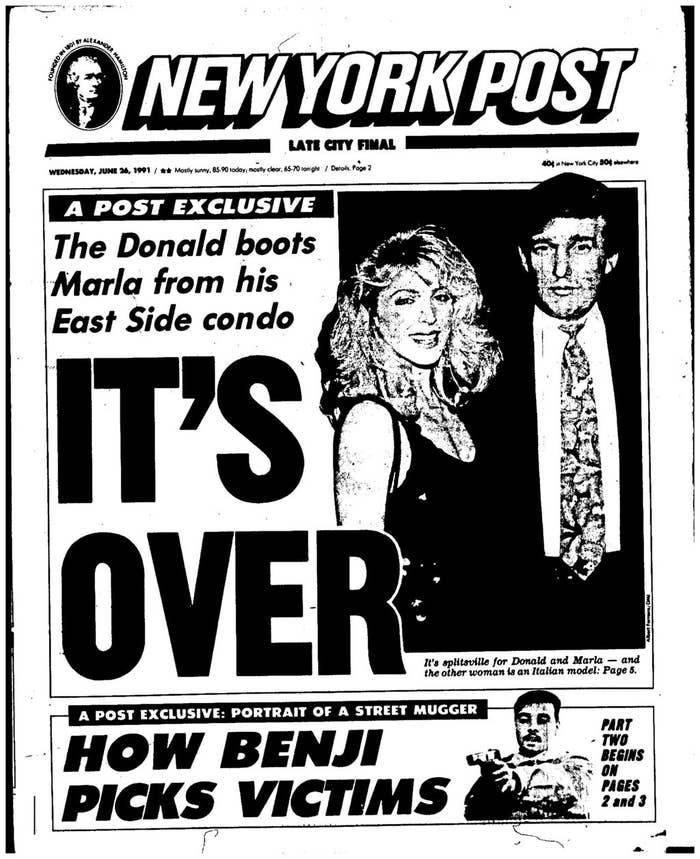 Trump finally admitted to the lie when confronted by the Daily Mail, saying there was no romance.

“These stories are sheer nonsense,” he said, but added: “She is a friend.”

However, Bruni, according to Harry Hurt III’s Trump biography Lost Tycoon, was no friend to Trump.

“Carla does not, however, consider Donald J. Trump one of the world’s ‘great men,'” writes Hurt. “After her arrival in New York he tracked her down at the Mayfair Regent hotel and tried to ingratiate himself. Carla mischievously informed Donald that her ‘sister’ was coming to town. He immediately offered to provide a room at the Plaza Hotel. The visitor was actually one of Carla’s longtime female friends, who showed up at the Plaza with a boyfriend in tow. Carla and her friends spent the next few days ordering room service and gloating over the way they fooled the ‘King of Tacky.'”

Hurt writes that, after confirming that Bruni was not dating anybody else, he began a rumor that he and Bruni were in a relationship, leading her to confront Trump directly for spreading the rumors.

During Trump’s campaign to be President, the Washington Post unearthed the fact the former reality TV star masqueraded as his own publicist and would call tabloids under the pseudonyms “John Miller” and “John Barron” and plant make-believe stories about various A-list women he purported to be dating such as Ms Bruni herself, Kim Basinger and Madonna.

Shortly after she married Sarkozy in 2008, a nude photo of her taken by a French fashion photographer in 1993 was sold at auction and generated something of a tabloid storm. Near the end of Trump’s presidential campaign, Melania wound up in a similar situation after the New York Post published nude photos of her which had been taken when the Slovenian native worked as a model.

“Menage a Trump,” ran a headline, boasting about the paper’s “exclusive photos”. 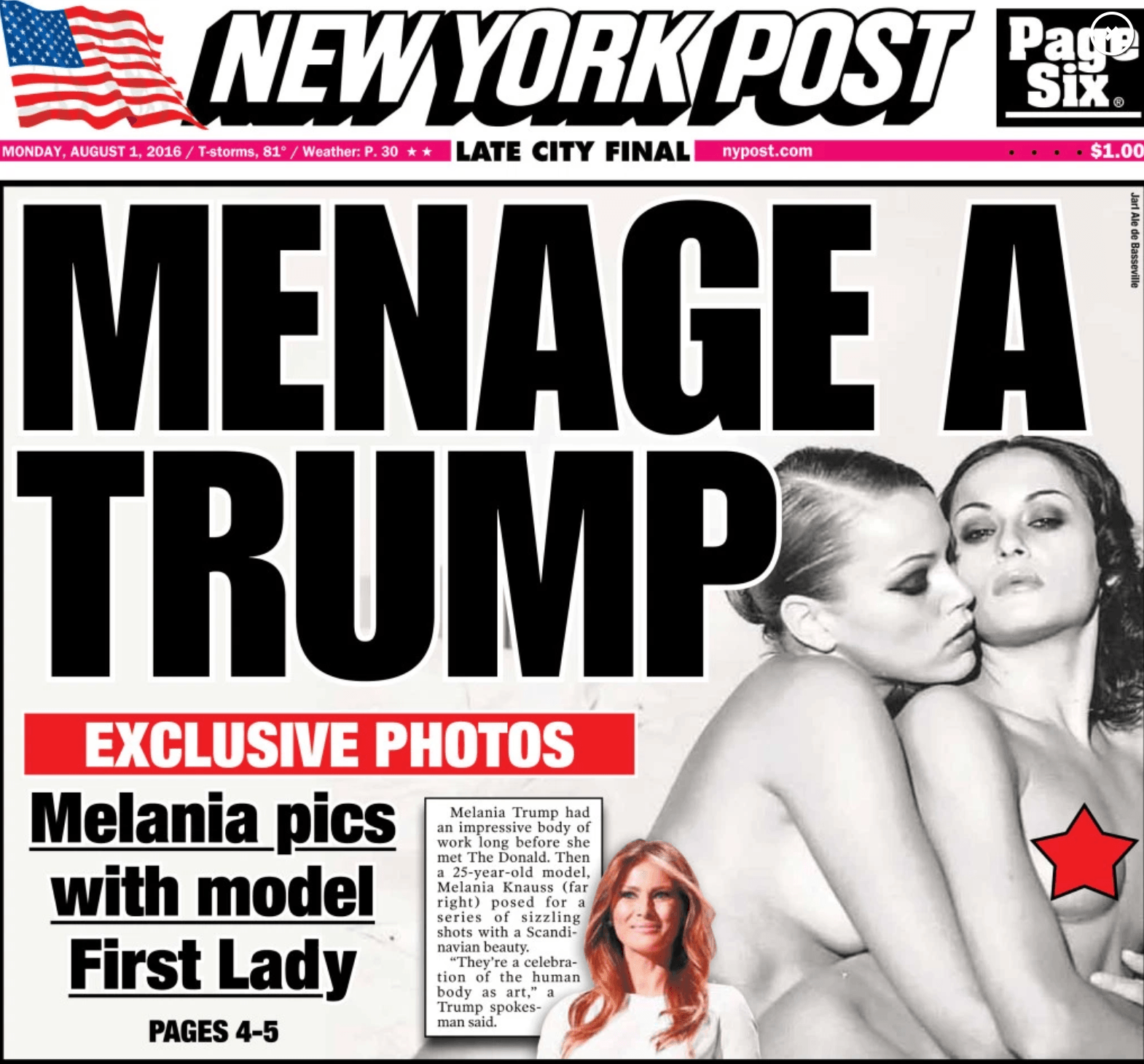 But Bruni is adamant the circumstances were not quite the same, saying: “It was very different because I had quite a bit of fame from my modeling and my first album”.

Donald Trump met Melania Knauss in 1998 at the Kit Kat Club in New York City at a party thrown by their mutual friend and co-owner of Metropolitan Models, Paolo Zampolli.

And when you take a look at photos of Bruni and Melania, it’s pretty obvious they look a lot alike.

I mean, they aren’t twins, but definitely share a similar look. 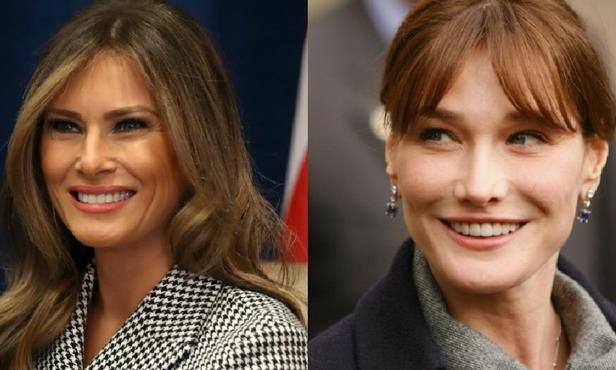 And Twitter couldn’t help but point out the similarities:

A periodic reminder that in the early 90's Trump fell head over heels for singer Carla Bruni (later Mrs President Zarkozy). When she rejected him, as good taste demands, he found a young Slovenian model and had her SURGICALLY ALTERED to resemble her. Absolutely no shit, Sherlock. pic.twitter.com/zGnFX99keV

A reminder: When 'normal American rich boy' Donald Trump was rebuffed by the beautiful and talented singer Carla Bruni (later Mrs Nicolas Sarkozy), he found a young, fresh-faced Slovenian model and had her surgically reconstructed as an ersatz doppelgänger. Sick or bloody what… pic.twitter.com/IQwLOjO2Yb

Let's never forget the utter monstrousness of Trump. In the early 90's he was rebuffed by his 'perfect woman', Carla Bruni (later 1st Lady of France). So he found a fresh-faced young Slovenian model and had her surgically altered to become a close facsimile. No. Shit. Sherlock. pic.twitter.com/zss0ODaBNf

True facts, folks. In the early 90's, Trump became infatuated by model and singer Carla Bruni (later Sarkozy's 1st Lady). She rejected him, so he found a similar featured Slovenian model and had her surgically altered to look as close to his crush as possible. Sick or what… pic.twitter.com/ScLO7s3QIu

I'll add this too: Rumors at the time were Trump dumped Marla because he was interested in Carla Bruni, who did not return his affections. This is a pic of Carla next to one of Melania. The resemblance is striking, almost as if she were chosen for it pic.twitter.com/OtgMo7MdEn