Melania Trump is definitely a very beautiful woman. She has a gorgeous, toned body and beautiful skin. Of course it’s fairly easy to achieve both when you’re married to a billionaire and maintaining your appearance is your only job.

Moving on, outside of being a beauty, Melania is also a copycat.

I’m serious, Melania has been caught multiple times stealing the words of others.

Now, the First Lady has been busted stealing the style of another First Lady.

CNN’s Kate Bennett, who is the only reporter to cover the First Lady exclusively, noted on Twitter that Melania Trump’s style often mimics that of her Spanish counterpart, Queen Letizia.

I mean, take a look at this:

These red dresses aren’t by the same designer, but they are extremely similar. Queen Letizia wore hers on April 29, 2017, and Melania then wore it in London on June 4, 2019.

Queen Letizia, a former journalist, is frequently recognized as one of the best-dressed women in Europe. Her style a and @FLOTUS’s are often similar … pic.twitter.com/yte9j3bRIq

In this comparison Melania wore the Dries Van Noten dress on December 13, 2019, and Queen Letizia wore hers on November 29, 2019.

Bennett also reported that the Trumps will be holding their third state dinner with the Spanish royals.

On April 21, the first couple will welcome King Felipe VI and Queen Letizia of Spain to the White House to “reaffirm our commitments to stand together to address today’s shared global challenges,” according to a release from the White House.

This will mark the second time the King and Queen of Spain have paid a visit to the Trumps at the White House. In June 2018, the royals spent several hours there while on a planned American tour that also included stops in San Antonio, Texas, and New Orleans, Louisiana.

Melania has copied the style of other First Ladies before, including Jackie Kennedy Onassis.

Stepping out to celebrate her husband’s inaugural day three years ago, it was her custom designed, Ralph Lauren sky blue ensemble which caught the attention of many.

Clearly, stylish and beloved young First Lady Jackie Kennedy’s own inaugural outfit must have been the only photo on the designer’s mood board.

First, Melania stole the color, and most thought that was all she stole: 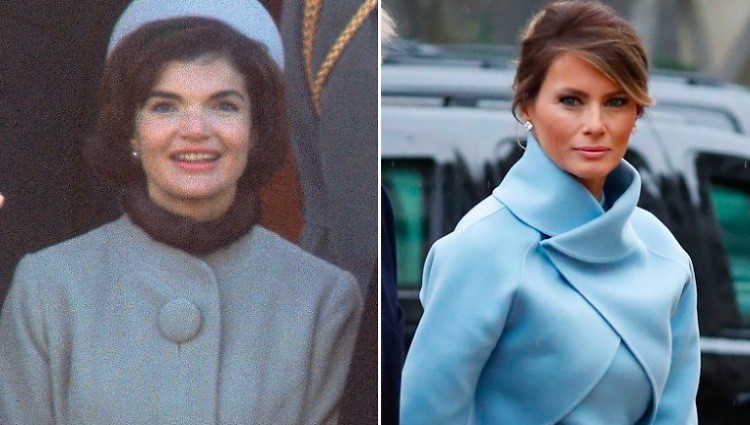 Turns out the design she wore was almost identical to a style Jackie Kennedy once wore in 1962. 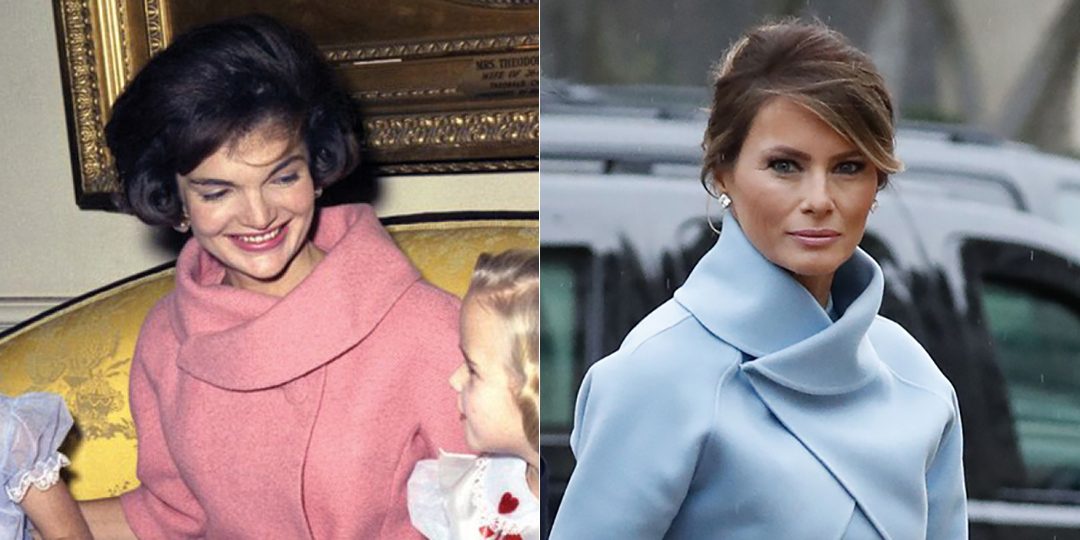 And this is by far the first time Melania has stolen someone else’s ideas.

Right after Melania unveiled her “Be Best” campaign, it was pointed out that she may have taken some inspiration from Michelle Obama … again.

As a reminder, Melania plagiarized parts of Michelle Obama’s 2008 Democratic National Convention speech in her own address at the 2016 Republican National Convention, including, hilariously, the phrase, “Your word is your bond.” (Oopsie.)

Some have even noted the similarities between Melania’s Be Best and a call to action Michelle. Obama issued to men during the White House summit on women in 2016. “Be better,” Obama told co-speaker Oprah Winfrey. “Be better at everything.”

“Be better” became a notable quote from the event, but it wasn’t a recurring motto of Michelle Obama’s, and Melania’s use of “Be Best” doesn’t seem to be as glaring an instance of copying-and-pasting as the RNC speech scandal, in which she almost lifted an entire paragraph, practically word-for-word, from Michelle Obama.

But it appears Melania Trump and/or her staff did, however, almost identically copy another aspect of the Be Best launch from the Obama administration.

A side-by-side comparison shows that the materials about “talking to your kids online” released by Melania Trump and the Federal Trade Commission . . . are actually nearly identical to a booklet released by the Obama-era FTC, with a slightly altered intro.

Fun fact: The White House trumpets “Talking with Kids about Being Online” as “a booklet by First Lady Melania Trump and the Federal Trade Commission.” Except for an intro, it’s exactly the same thing Obama’s FTC put out. pic.twitter.com/AEf6F0gBbt

So, do the Trump have none of their own ideas??

It’s still only day 2 of a sad. pathetic, and false Presidency pic.twitter.com/82ynEtGDIj