President Donald Trump tore into 2020 Democrat Michael Bloomberg on Thursday, poking fun at his height and slamming him for not participating in the Democratic primary debates.

“Mini Mike is a 5’4” mass of dead energy who does not want to be on the debate stage with these professional politicians,” the president tweeted Thursday. “No boxes please. He hates Crazy Bernie and will, with enough money, possibly stop him. Bernie’s people will go nuts!”

Mini Mike is a 5’4” mass of dead energy who does not want to be on the debate stage with these professional politicians. No boxes please. He hates Crazy Bernie and will, with enough money, possibly stop him. Bernie’s people will go nuts!

Bloomberg welcomed the criticism from Trump, saying it shows the president was starting to consider him a threat.

“If he doesn’t mention ya, ya got a big problem,” the former New York City mayor said at a campaign stop.

Now in Greensboro, NC – @MikeBloomberg notes this & another tweet from the President this morning. “If he doesn’t mention ya, ya got a big problem.” Bloomberg speculates that Trump might be looking at his polling & that he might be scared. https://t.co/4e4uXDGVRy

He also responded to the president on Twitter, writing, “We know many of the same people in NY. Behind your back they laugh at you & call you a carnival barking clown. They know you inherited a fortune & squandered it with stupid deals and incompetence. I have the record & the resources to defeat you. And I will.”

.@realDonaldTrump – we know many of the same people in NY. Behind your back they laugh at you & call you a carnival barking clown. They know you inherited a fortune & squandered it with stupid deals and incompetence.

I have the record & the resources to defeat you. And I will. https://t.co/fO4azmZaUg

As Bloomberg has risen rapidly in the polls, the president has begun targeting him with attacks. In addition to claiming the presidential contender wants a box to stand on during debates, Trump sent and then deleted a tweet earlier this week about leaked audio from 2015 in which Bloomberg praised stop-and-frisk policy.

“Wow, Bloomberg is a total racist!” he said in the tweet, which included audio of the former mayor’s comments. Pundits were quick to point out, however, that the president had praised stop and frisk during the 2016 election.

Bloomberg has risen to 14% support nationally in the Democratic primary, according to RealClearPolitics. His rise came as former Vice President Joe Biden performed poorly in the two first-in-the-nation voting states and has dipped in the polls.

And yeah, I bring this up often, but Trump is rumored to wear lifts in his shoes and lies about his own height.

It appears Donald Trump was 6’2” for years before he entered the 2016 Republican Primary, then he shot up to 6’3”.

This may have had more to do with his rivals at the time, Jeb Bush and Rick Santorum who are both 6’3”. History confirms in the race for president the taller candidate is most likely the victor.

Trump resents people who are taller than him and does not like to look small in front of his opponents. He is man obsessed with being the biggest, the best, the most impressive, and does not feel constrained by objective facts to prove it.

Photograpic comparisons with others of known height appear to tell a conflicting story. During his inauguration, standing next to former president, Barack Obama (6’1”), Donald Trump looked smaller in stature.

When he and former FBI Director, James Comey (a whopping 6’8″), were photographed the latter towered over the former, and more than the official 5 inch difference in height. 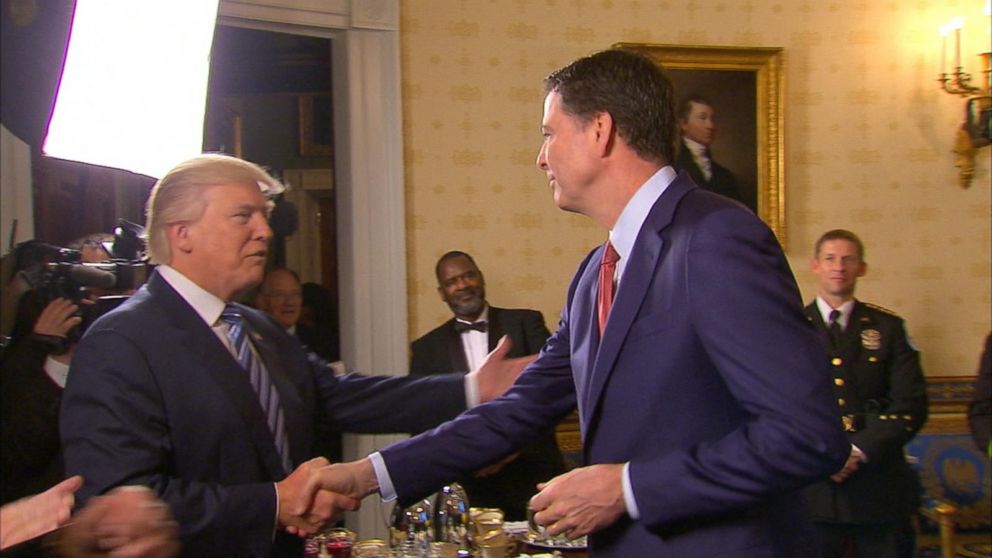 When Trump stood beside Justin Trudeau (6’2″), the two appear to be the same height. Yet, Trudeau, appears at least an inch taller than Trump in a photo taken at the G7 summit. The two men stand shoulder-to-shoulder in the image along with fellow world leaders.

Human height has long been associated with interpersonal dominance and social status. Both sociological studies and historical evidence confirm taller people receive a more positive perception of themselves as well as greater social success. The idea height alone defines a man’s value is archaic and part of a very backward notion of masculinity.

None the less, tall men seem to command more respect and reverence. Thanks to anthropometric research data, it is possible to calculate a person’s height from their hand length, as the two measurements are highly correlated. Taller people tend to have bigger hands, although there is some variance in human proportions 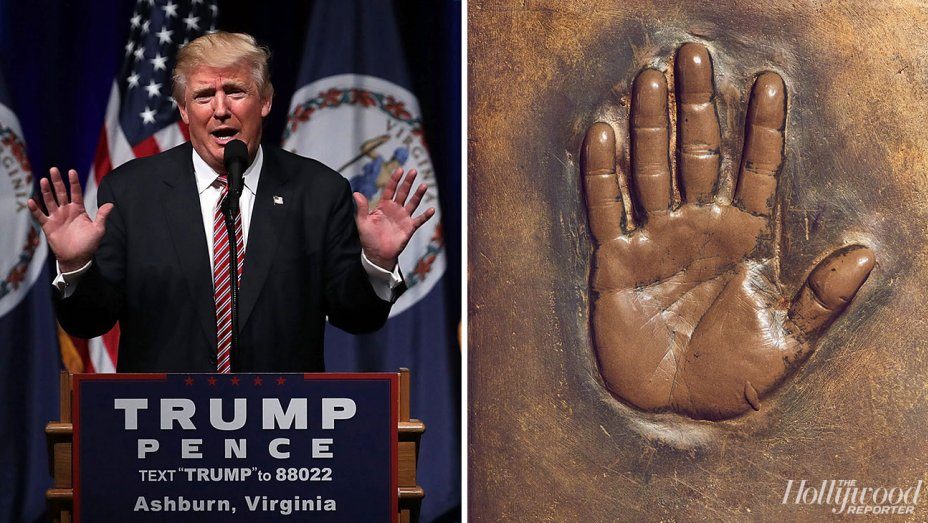 The 1988 US Army Anthropometry Survey (ANSUR) data , provides hand height comparisons, and when the Tussaud hand is measured in the same way, Trump’s corrected hand length is 7.8 inches, which would make him approximately between 5’ 9” and 6’ tall . Trump’s hand length is almost exactly 1 standard deviation below what we would expect of someone as tall as he claims.

Unfortunately, for the benefit of analysis, there is not a Trump footprint. As with the hand, a linear correlation between foot size and height exists and taller people generally have bigger feet. Officially Donald Trump is a size 12 (US), with is consistent with a man of 6’3” stature. However, shoe size is not a perfect measure of foot size, and people can wear longer shoes to give the impression of larger feet.

Comparisons between Justin Trudeau (Size 11 US) and President Trump (size 12 US) do suggest Donald J Trump may have smaller feet than widely reported. The combination of elevated shoes worn longer than the feet however, like clown shoes would lead to an unsteady gait, particularly when negociating stairs. It has been claimed Donald Trump suffers from bathmophobia, or the fear of slopes or stairs. 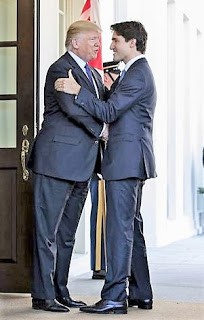 Throughout his presidency, Trump appears to wear expensive suits that just did not seem fit him. We are told he prefers to buy off the peg clothing but refuses to have them tailored. Further it seems he persists with being taller than he actually is and wear suits cut for a 6’3″ man. Common sense might tell you even wearing shoe lifts this suiting will not match the physique of a significantly smaller frame. 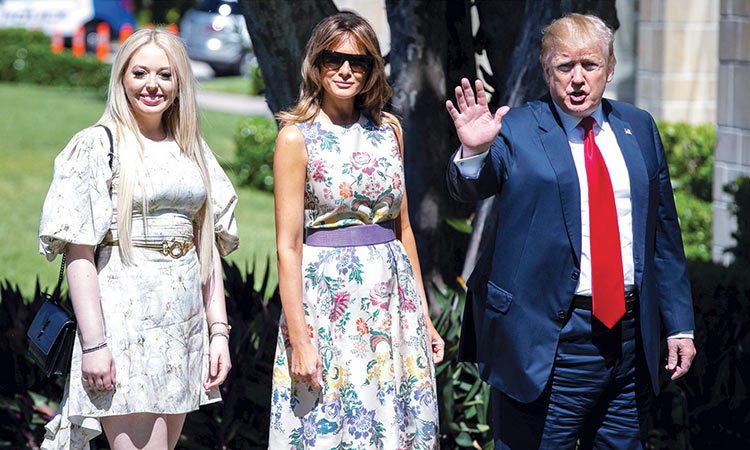 The President of the United States in ill-fitting suits makes him appear at time comical with or without elevated shoes. No doubt this accounts for his change of wardrobe to long coats to help streamline an expanding waistline. Officially, according to his latest medical records, Trump is 6-foot-3, weighs 243 pounds, and has a body mass index of 30.37 (Class 1 obese).

This interesting Twitter thread also says Trump’s posture is because he has lifts in his shoes to make him taller: