Trump Campaign Forced to DELETE Daytona 500 Air Force One Pic: PHOTO Is from 2004

My god, these people.

In a since deleted Tweet, Brad Parscale – one of the world’s worst people – tweeted out that @realDonaldTrump won the #Daytona 500 before the race even started. 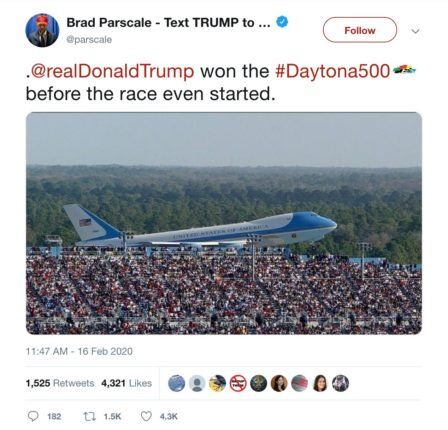 CNN (the Trump nemesis) was the first to “out” that the photo was faked, or at least “old” ha ha.

President Donald Trump’s campaign manager deleted a tweet featuring a dramatic photo of Air Force One at the Daytona 500 after users pointed out that the shot was from President George W. Bush’s visit to the NASCAR race in 2004, not from Trump’s visit on Sunday.

Brad Parscale tweeted the 2004 photo, which shows Air Force One rising above packed stands at the Daytona International Speedway in Florida, and wrote, “[email protected] won the #Daytona500 before the race even started.”

But the photo was taken by photographer Jonathan Ferrey on February 15, 2004, after Bush’s visit to the racetrack, as Air Force One took off from the adjacent Daytona Beach International Airport.

As Nicole and Heather have documented, the Trump’s visit to Daytona turned the entire race into a campaign event, beset with disasters. Though some in the Daytona crowd of over 100,000 had to love Trump’s takeover, one would think that many resented that even one of their most cherished cultural events was being “used” as a political prop.

Speaking of “props,” Parscale quickly switched the photo to a less dramatic one that actually was taken today, captured in the tweet below.

Now imagine the stuff they are lying about behind the scenes. If they are willing to descend to stunts like this out in the open, imagine what is happening below the surface.

Oh, and last thing. In keeping with “Everything Trump Touches Dies,” and in the same way Alabama lost the football game Trump attended, the Daytona 500 finish is delayed until tomorrow because of rain.

Perhaps God is working with this country, but many aren’t getting the correct message.