UPDATE: Snopes did their due diligence and determined the “wet mark” on Trump’s pants was actually a shadow. They were able to obtain other angles that show Trump didn’t indeed wet his pants.

Trump visited tornado-ravaged disaster areas in Tennessee on Friday, just days after the twisters that whipped across the state left 25 dead and dozens more injured…and also prayed with the response team where he appeared to have wet pants.

Trump stepped off Air Force One and greeted Gov. Bill Lee, Sen. Marsha Blackburn and other top officials shortly after 10 a.m. and then took a chopper to view hard hit sites.

“We’re going to see some of the people who survived, some in good shape, some not in good shape. They got very little warning. They get a phone call and boom, the tornado is on them,” the president said in the town of Cookeville, in Putnam County, as he was flanked by Lee and Ricky Shelton, the mayor of Cookeville, where eight people were killed.

“All of a sudden, they’re watching television or something, and then it hits,” the president said as the rubble left by the tornadoes was visible in the background, and as Lee and Shelton praised the federal government’s quick response.

According to the White House, Trump pledged federal assistance to help Tennessee recover from the tornadoes.

But the White House doesn’t want to talk about the fact that the back of Trump’s pants appeared to be wet.

We’re grateful for the prayers and support of our neighbors after a very hard week for Middle Tennessee. Thank you, @realDonaldTrump for making the trip to survey storm damage in our state.

But what people noticed was this: 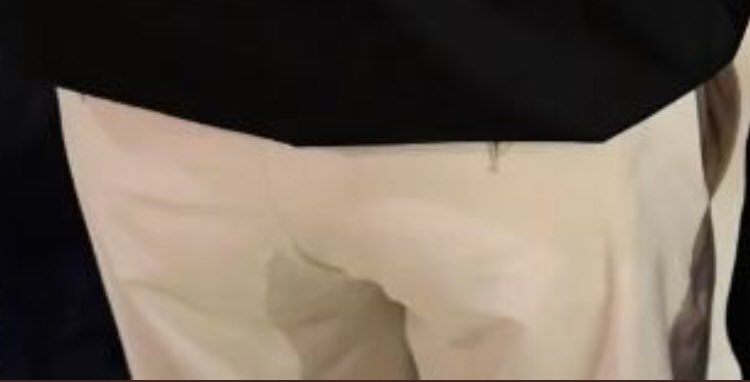 Once the photo was posted, people had some thoughts:

Did T wet his pants?

Elephant man Donnie has dressed in the dark again (and found some of Pavarotti’s old clothes)… and yes, I think that may well be piss seeping through his giant nappy…

You mean besides trump’s wet pants indicating he just lost control of his bodily function again?

Did his catheter have an oopsie? pic.twitter.com/uIPklPJfzA