Donald Trump is a vain and insecure man, and the older he gets, the more he’s trying to hide his obvious physical shortcomings. Honestly, he was never a handsome man. But with age he is losing his hair, his skin is aging and getting wrinkly, etc. I mean, he’s 73. He’s getting older. It happens to everyone.

But, Trump isn’t everyone. He can’t deal with being seen as less than his best.

Truth be told, he just looks foolish. Like an old fool.

Come on, this is just sad:

Look at this stupid fucking goon… Just look at him! Look at that ridiculous god damn clown makeup line running down the side of his head. What a ridiculous fucking jackass… No wonder world leaders laugh at him. Imagine having to stand next to this lumbering imbecile. #Trump pic.twitter.com/o09BPsIOMT

Then there is Trump’s “vagina neck”.

Trump hates his double chin and has complained about it in the past.

From Politico, “He also complained about photos of himself that NBC used that he found unflattering, the source said. Trump turned to NBC News President Deborah Turness at one point, the source said, and told her the network won’t run a nice picture of him, instead choosing ‘this picture of me,’ as he made a face with a double chin. Turness replied that they had a ‘very nice’ picture of him on their website at the moment.”

Well, it must be bothering Trump to this day, because according to one Twitter user, the White House is manipulating videos of Trump to hide his flabby double chin.

The Rude Pundit did some investigating and wrote:

“It looked like someone had digitally removed Trump’s pronounced neck wattle, the prominent flesh sag that, when pinched together by a collar and tie, has the quality of a puffy vulva. Sometimes, it does lop over his collar but certainly not smoothly.”

Now look at this video, and note the area around Trump’s chin. Notice how it almost looks cartoon-like? Note how it appears to cover his collar. This isn’t normal.

Here is a similar video Trump did almost two months ago, and the chin line doesn’t appear manipulated and his vagina neck is on full display:

Now of course, there are more important things in the news to cover. The stock market is collapsing, and coronavirus is on everyone’s mind. But we must ask, if Trump and his White House will lie about something so insignificant as his chin, what won’t they lie about? 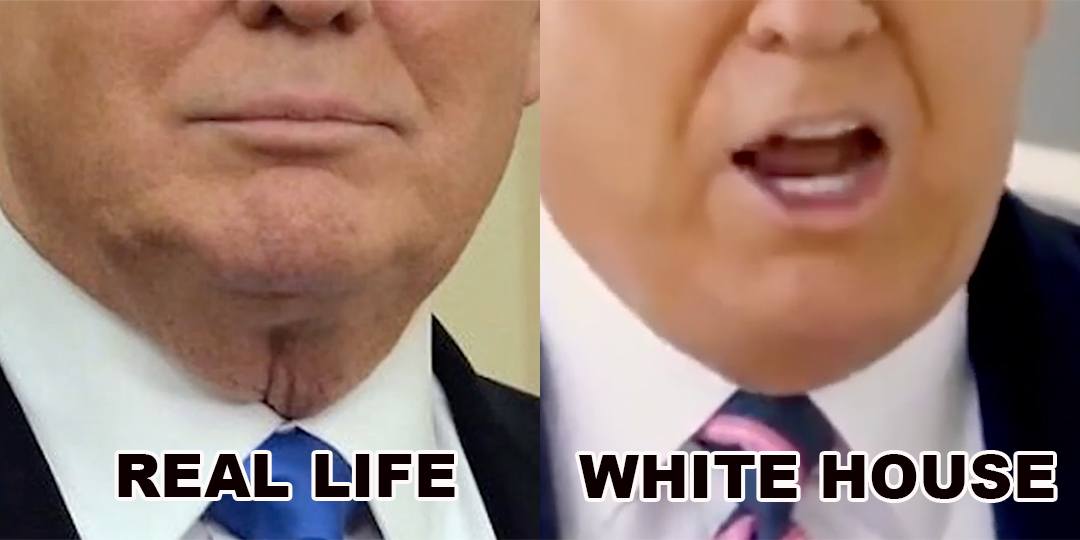