One of the most thoroughly creepy and inexplicable aspects of Donald Trump’s personality and diseased mind is his obvious attraction to his daughter – something that he has admitted in front of people, and in private where people have come forward with stories.

It is exceedingly difficult to discuss because the behavior offends every notion of decency and normality one expects from a father and his relationship with his daughter. Yet we know that Trump asked a friend at one point “Isn’t she hot?” when Ivanka was 16.

We know that Trump told a live studio audience that he would be dating Ivanka if she wasn’t his daughter. There are the pictures, highly highly sexualized pictures with her on his lap. We also have heard several women, including Stormy, say that he mentions that they “remind him of his daughter.”

As the father of a 12-year-old girl, that was a difficult paragraph to write. But it must be examined because it is so wrong, so telling, and one of the most obvious symptoms of a diseased mind, that it should be “known.” Moreover, he is the one who forced her upon us as a “Senior Adviser” to the president – a public employee, even if she says she doesn’t draw a salary. *No one has ever proved as such.

Regardless, Noel Casler has known the entire Trump family for a long time and worked on the set of The Apprentice. He is one of the few “insiders” that is willing to speak out about Trump. Unlike the vast majority of former Trump employees, Trump has never refuted any of Noel Casler’s assertions, nor has Trump ever tried to enjoin Casler with a cease and desist letter.

When Vanky was 16 she hosted ‘Miss Teen USA’, in the middle of a rehearsal Trump called her over and had her give him a lap dance while he leered at the crew. We had the same look his advisors did the other day during ‘disinfectant’ remarks. @realDonaldTrump

To the sanctimonious folks who say, ‘why did no one do anything?’ Trump got away with much worse and always played by a different set of rules. If you think someone could just call up ‘social services’ on a mobbed up famous NYC billionaire with NYPD on his payroll you are naive.

Just for the record, there were as many women who witnessed this behavior as men. I tried to get each and every one of them to speak out to NYT & HRC Campaign, as I did in ‘16. Not one of them was willing to come forward. I begged them. They didn’t think it would matter.

I walked away from my career in live TV. Knowing I wouldn’t work in that industry I spent 25 years in again. They had families, so I understand the weight of their decisions. For me, I had to keep speaking out and it’s why I went into stand up and call him out on twitter.

Given all the pictures, all the comments, and given the stories we have heard about Epstein and the sexual assaults, I think it’s possible that Trump actually did this. I certainly believe he’s capable of it

This is just…gross…and so wrong: 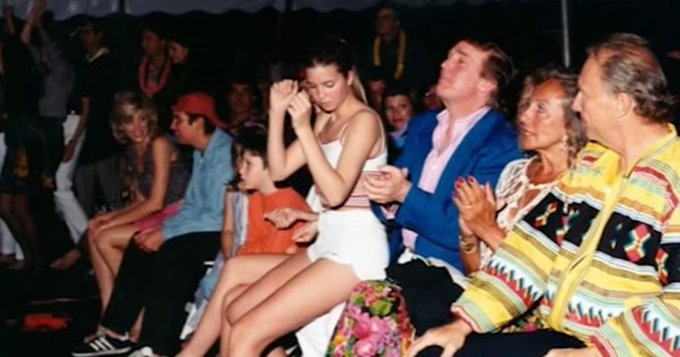