The right loves to meme. It’s their “thing” and to be quite honest, they are very good at it. Just last week the Trump campaign tweeted a meme with Trump as the Star Wars character Yoda, and showed Trump/Yoda decapitating CNN and MSNBC. Not normal, but then again, nothing is anymore.

Now we have another meme that shows Trump slapping former President Barack Obama, and it has been spread far and wide, including by the president’s son Don Jr.

Here’s the video that was originally shared by prolific plagiarist Benny Johnson, who now works for Charlie Kirk’s organization Turning Point, after being fired from quite a few media companies for stealing other people’s words.

This is the most accurate and informative video on the Internet right now: pic.twitter.com/BeMkO8CHFB

Joe Lockhart, the press secretary for the Clinton White House, pointed out that the meme is clearly racist and why:

for those who didn't think the attack on Obama is racist, think again. I surprised they didn't shoot the heavily tattooed black man and then claim stand your ground. Every Republican who thinks this is ok is complicit with racism. And being complicit makes you a racist. https://t.co/6y07rFNXGk

Don Jr. posted it on Instagram and said he was excited to get to the bottom of the “coup”. He also retweeted Benny’s tweet. 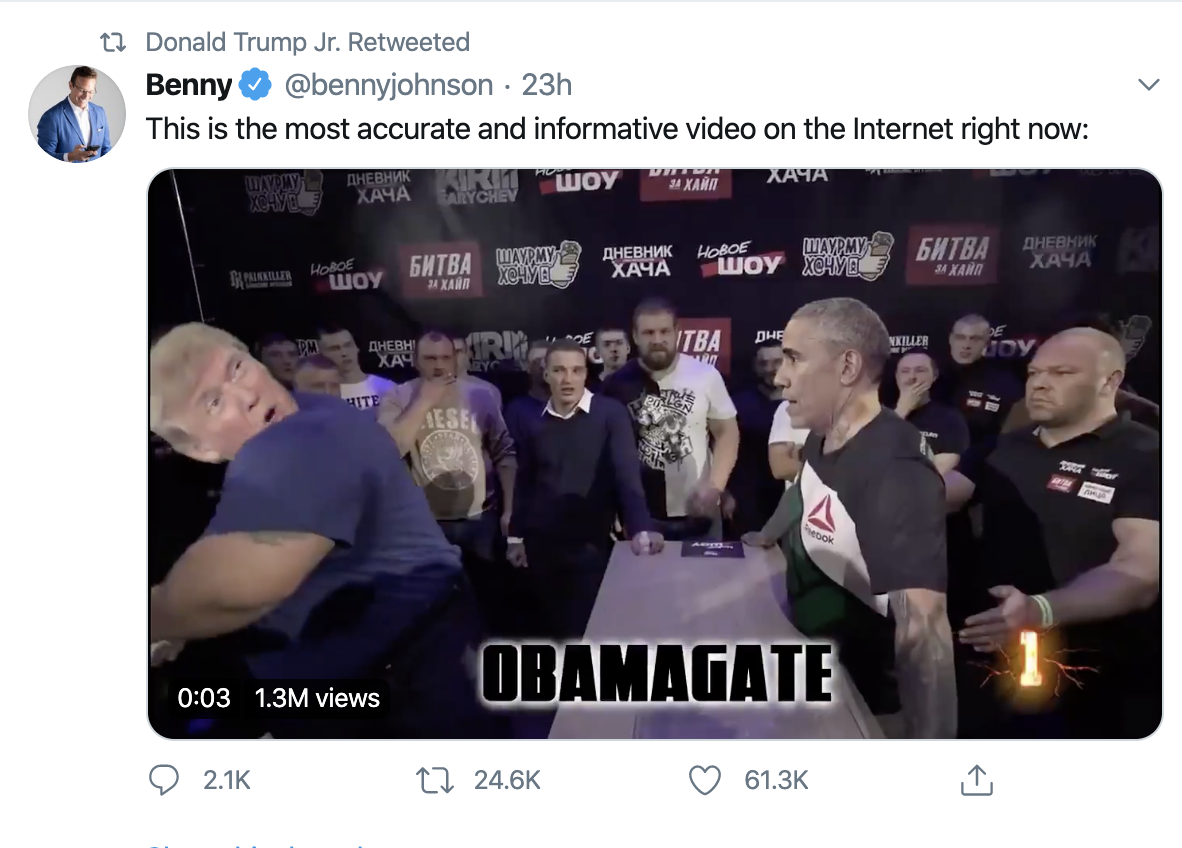 Now mind you, Donald Trump doesn’t even know what Obamagate is, or what crime Obama is apparently guilty of committing.

When asked by a Washington Post reporter the day after his “OBAMAGATE” Mother’s Day tweet to name and explain the crime Obama committed and say whether the DOJ should prosecute the former president, Trump deflected.

“You know what the crime is. The crime is very obvious to everybody. All you have to do is read the newspapers, except yours,” the president said.

The Trump slapping Obama meme is simply gross and beneath the dignity of the office of the Presidency. Not like that matters anymore though.

Obama was and is such an intelligent, altruistic, community-focused, funny, thoughtful, diligent president, dedicated to helping the poor, encouraging the youth, hardworking and personable, that you have to make this childish video up to make fun of him.

Obama: are you kidding me? Look at your body ….. You have to be very fit…… Maybe you can be a Sumo Wrestler….all the best…. #ObamaWasBetterAtEverything #BarackObama pic.twitter.com/MldSTPLIMN

Yes, this cartoon does capture the delusional wish group thinking echo chamber of the right-wing fever swamp quite well. Especially enjoy the metaphor of an accusation of corruption as a violent slap. Very revealing.

The only way that Trump could beat up Obama is if he sat on him, or mistook him for a Big Mac.

You probably won't see one indictment from "Obamagate" https://t.co/QCpxWVF7Xg