By now you have heard the news. Early Sunday morning Donald Trump tweeted a video where one his deplorable fans yelled out “white power.”

It was revolting and inexcusable, and sadly, not that surprising anymore.

According to White House spokesman Judd Deere, Trump did not hear the phrase “white power” being shouted in the clip.

Deere told CBS News on Sunday that Trump retweeted the video because it showed the “enthusiasm” his voters have for him in The Villages in Florida. He said that Trump focused on the passion of the crowd and did not hear one man shout, “White power!”

In response to that tweet, @WhiteHouse @JuddPDeere45 tells @CBSNews:

"President Trump is a big fan of The Villages. He did not hear the one statement made on the video. What he did see was tremendous enthusiasm from his many supporters.”

The video in question shows several older Trump supporters shouting the president’s name and other phrases, such as, “Make America great again,” while holding a golf cart parade through the town, which is exclusively for senior living. When the parade passed by an anti-Trump demonstration, one of the men in the video shouted, “White power!” A man who appeared to be an anti-Trump protester repeated the older man’s word’s in disgust, saying, “There you go, white power.”

Trump retweeted this video of his supporters in The Villages yelling "white power!"

Trump did end up deleting the tweet and video, because it’s disgusting. But he didn’t apologize or explain himself whatsoever. 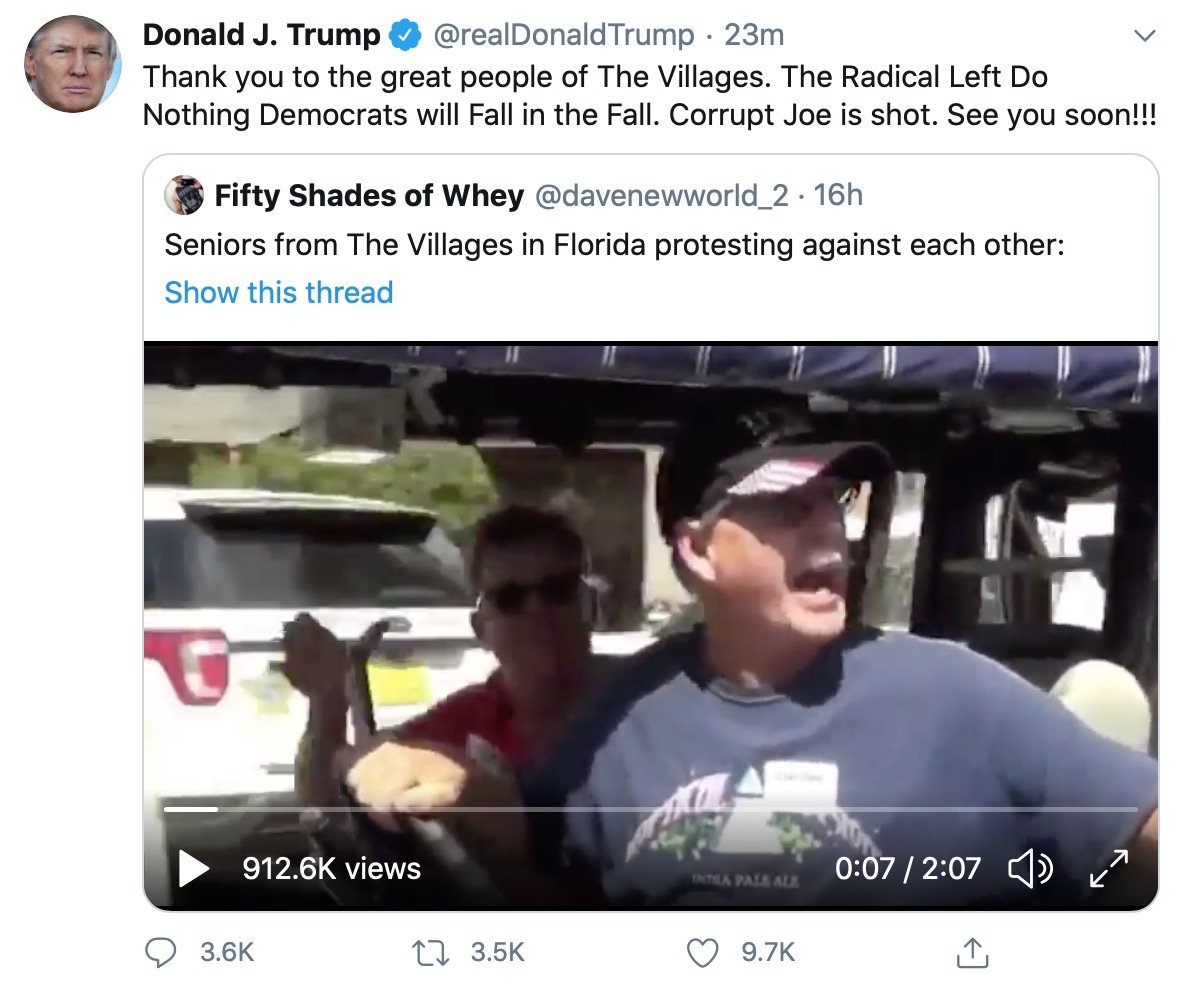 There is no excuse for this. NONE. It’s abhorrent. It’s disgusting.

But now several conservatives are speaking out and claiming the Trump supporter in the video was merely being “sarcastic.”

Kind of how Trump claimed his suggestion to inject disinfectant was “sarcastic.”

The man in the video wasn’t being sarcastic. YOU CAN WATCH THE VIDEO! He’s proudly saying WHITE POWER. He’s basking in it. He loves the fact that he can only espouse his racism now that Trump is president.

Take a look at how conservatives are defending this:

If you listen to the audio closely, the guy in cart that yelled “white power” was simply being sarcastic responding back to the anti-Trump guy on sidewalk who was chanting “racist, racist” at him. Context matters.

You really need to watch the video and respond to it in the context it was said.

He’s clearly being sarcastic as the asshat liberals call them racist because they support trump (that makes sense right?)

Context my dear libtard. Context is key. And I’m done explaining how sarcasm works. Pick up a grammar book and get to reading and comprehending

Omg. For reals tho. Do you not understand sarcasm? The old man at the beginning of the video was BEING SARCASTIC. I doubt he really supports white power but they were calling him a Nazi. He was being a smart ass.

Because he clearly didn’t listen to it and it’s being taken out of context. The guy yelling white power was clearly being sarcastic and responding to the absurd accusations of the other protestors. Ya know, like screaming RASCISM every two seconds.

The CNN “reporter” is intentionally misleading people by not providing context

Trump INFURIATES Americans by Tweeting that Everything is Going Great with Coronavirus, ‘Low and Steady!’