Donald Trump lashed out at the “lamestream media” on Wednesday for allegedly covering a photoshopped image that compared his holding a Bible during a Monday evening photo op at St. John’s church with Adolf Hitler similarly holding a Bible.

However, no cable network ever covered the fake image…which was called out as fake very early.

Ok, so here is a little backstory. Trump was reportedly upset by press coverage of his Friday night sheltering in a bunker during protests adjacent to the White House, so on Monday Trump arranged a walk to nearby St. John’s church, where he posed with a Bible in a press event that has largely been derided by his critics. Particularly because of how peaceful protestors were cleared out with brute force in the moments before.

Robby Starbuck, a conservative filmmaker, tweeted that he reached out to Twitter “to ask about this totally fake photoshopped photo that has gone viral where they added a bible to Hitler’s hand,” before adding that Twitter “will be adding a manipulated media label to tweets sharing it soon.” This tweet was quote-tweeted first by reporter Henry Rodgers, then by Trump, who said “The knew it was Fake and went with it anyway. Lamestream Media is CORRUPT! ”

So Trump quote retweeted the above, and claimed that networks ran with the story anyway. Which didn’t happen.

The knew it was Fake and went with it anyway. Lamestream Media is CORRUPT! https://t.co/LHIYoo92zx

Trump followed with a now-standard critique of the “Fake and totally Slanted News”:

Really sick to watch the Fake and totally Slanted News(?) coming out of MSDNC and CNN. It bears NO relationship to the Truth or Facts. They are merely offshoots of the DNC, much like the @nytimes and the Amazon @washingtonpost. Just like 2016, but worse. Sad, but we will win big!

And you will note that Twitter did indeed add a notation that the photo is fake, which they should. Trump is bad enough, we don’t need to use fake images which he will only use to further play the victim. 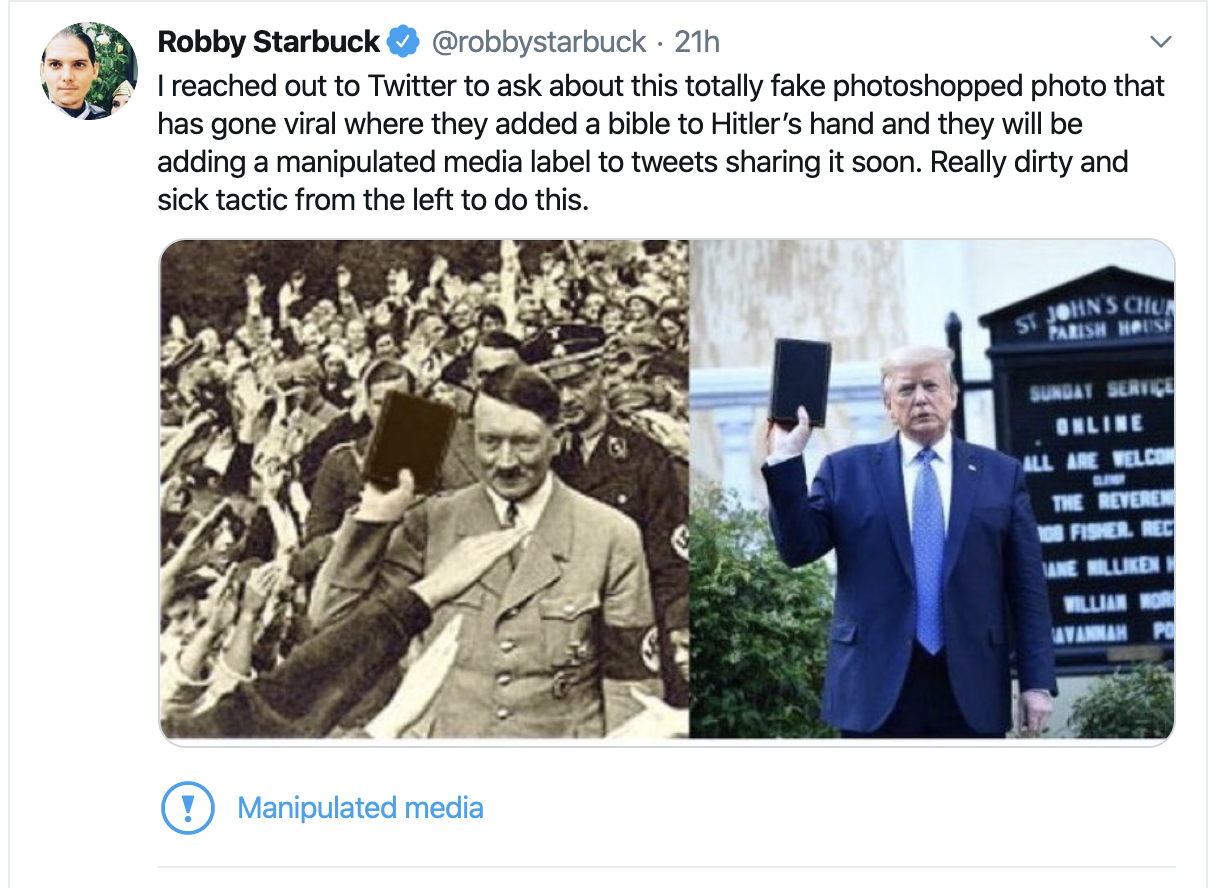 Twitter had some thoughts, as well as some images that WEREN’T photoshopped:

The Hitler photo with the Bible is fake.

This one is real.

Their politics are alike. Trump uses Hitler’s playbook in dumbing down a message for angry people who thrive on division. pic.twitter.com/PnqbbOYstk

In any case, Trump called the Nazis in Charlottesville “very fine people” pic.twitter.com/ImRJ2ebi6f

It’s used as an example. As a comparison. Doesn’t matter if it’s photoshopped. It’s perfect. Hitler used Christianity as a prop in attempt to justify his disgusting actions. Trump is doing the same. pic.twitter.com/ZmYYBvuuHA

This isn’t fake though. pic.twitter.com/JR06JeIawZ