It’s kind of well-known that Donald Trump’s hair is wack.

Trump has assured the public time and again that his hair doing just fine. In 2011, the former Celebrity Apprentice host appeared in an in-depth Rolling Stone interview and explained his hair routine with intricate detail. “OK, what I do is, wash it with Head and Shoulders. I don’t dry it, though. I let it dry by itself. It takes about an hour,” Trump said about his morning routine.

“Do I comb it forward? No, I don’t comb it forward,” he added. “I actually don’t have a bad hairline. When you think about it, it’s not bad. I mean, I get a lot of credit for comb-overs. But it’s not really a comb-over. It’s sort of a little bit forward and back.”

But you must admit, there are some weird things going on with Trump’s hair. But that wasn’t really always the case.

Let’s take a look at this. 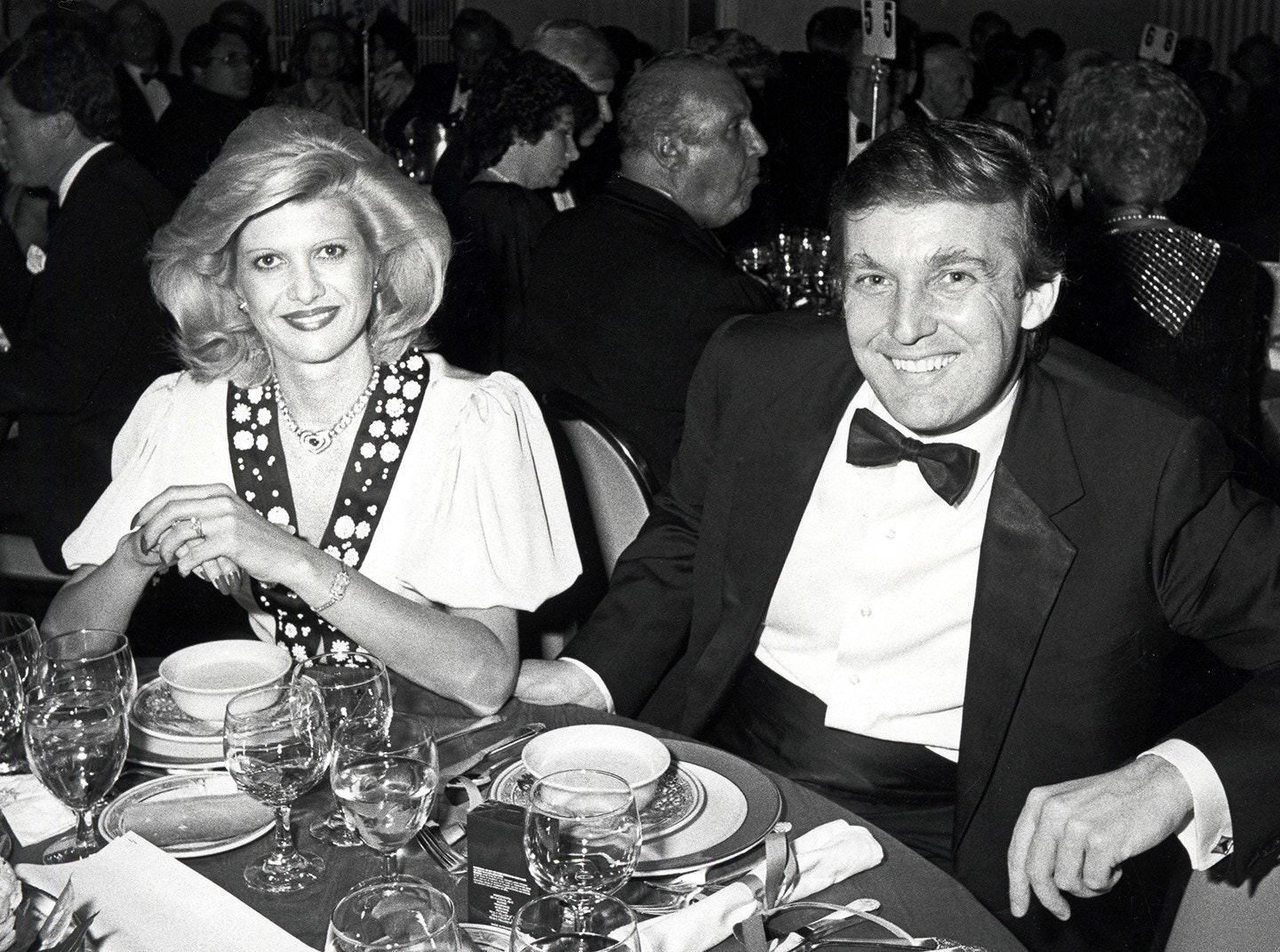 The year is 1985. Trump, pictured with his first wife, Ivana, is now parting his hair from left to right, as he does to this day (to the extent that the complex superstructure that is Trump’s hair can be said to have something as straightforward as a “part”). This is believed to be the last picture in which more than three-quarters of an inch of Trump’s forehead was exposed to public view. 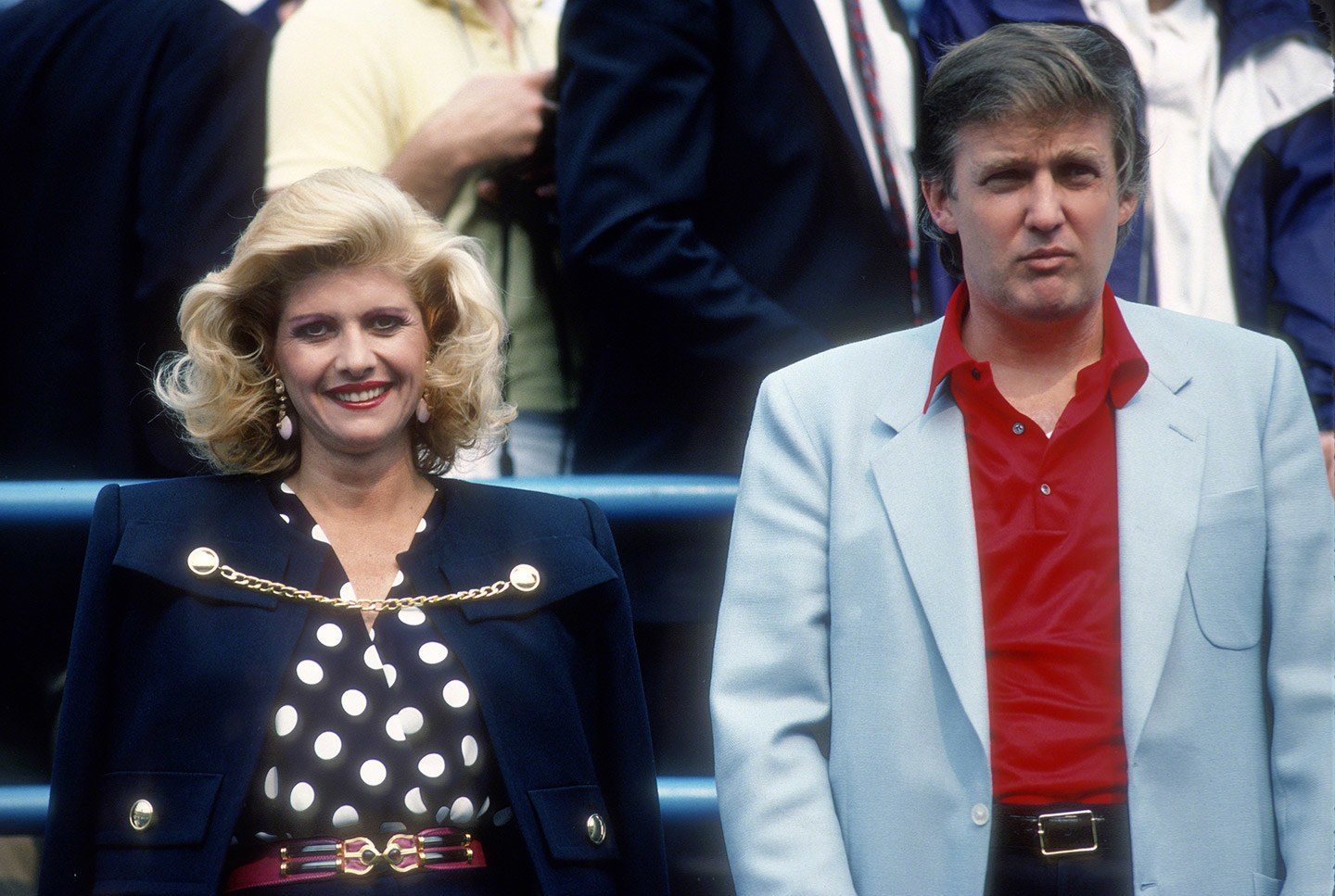 Mr. and first-Mrs. Trump at the 1988 U.S. Open. Note that Ivana has essentially the same hairstyle as Donald, the rightward sweep of her hair echoing her husband’s, though Ivana’s tresses are clearly attached to her forehead in a way that lends all the more mystery and intrigue to his. 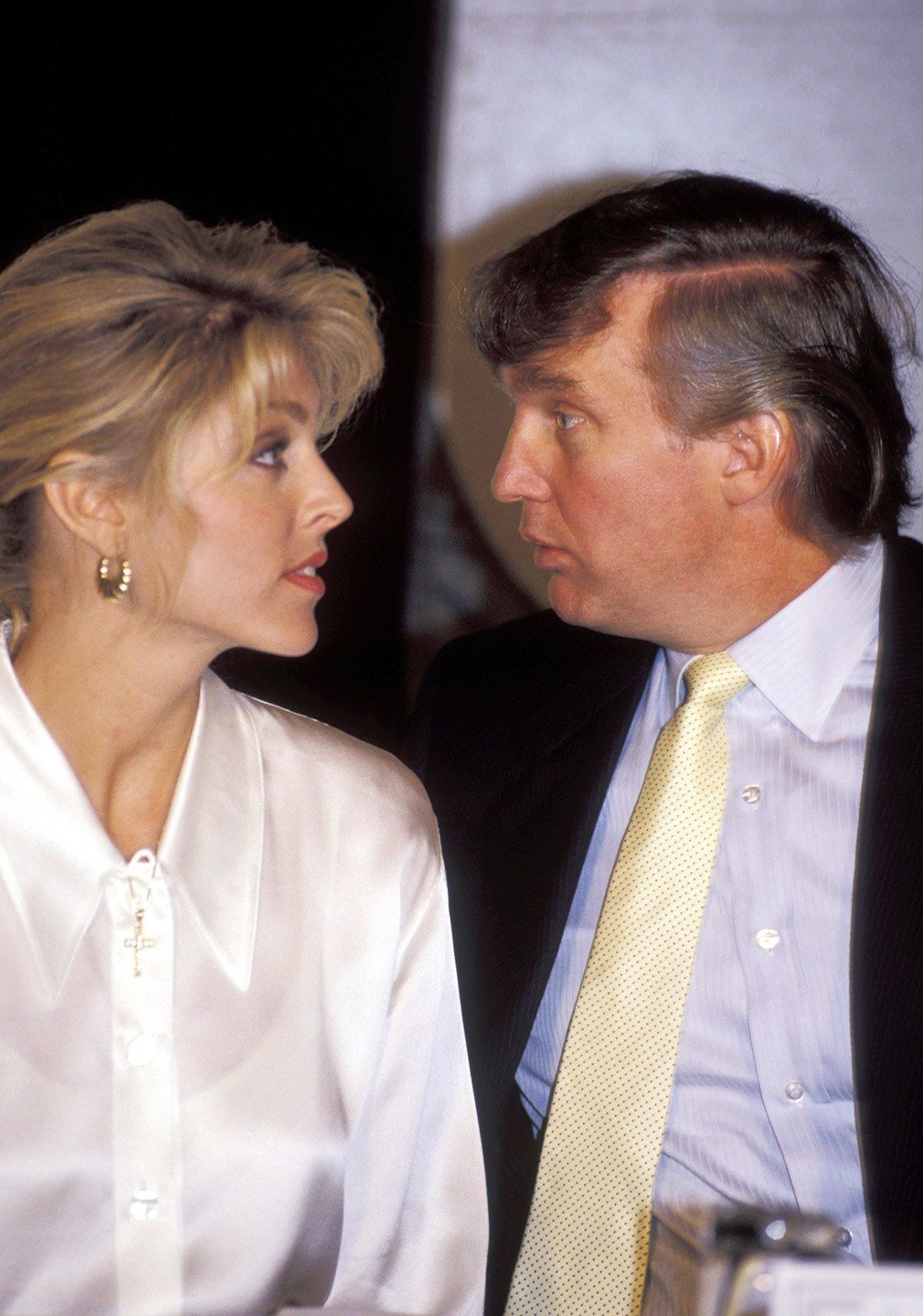 Trump and then-girlfriend Marla Maples sanctifying their love, like all devoted couples do, at a press event in 1991. Note that Trump’s “hairline” is now nearly contiguous with his eyebrows. Is this evidence of the scalp reduction he allegedly underwent in 1989, according to divorce papers filed by Ivana and recounted in the 1993 biography Lost Tycoon: The Many Lives of Donald J. Trump? 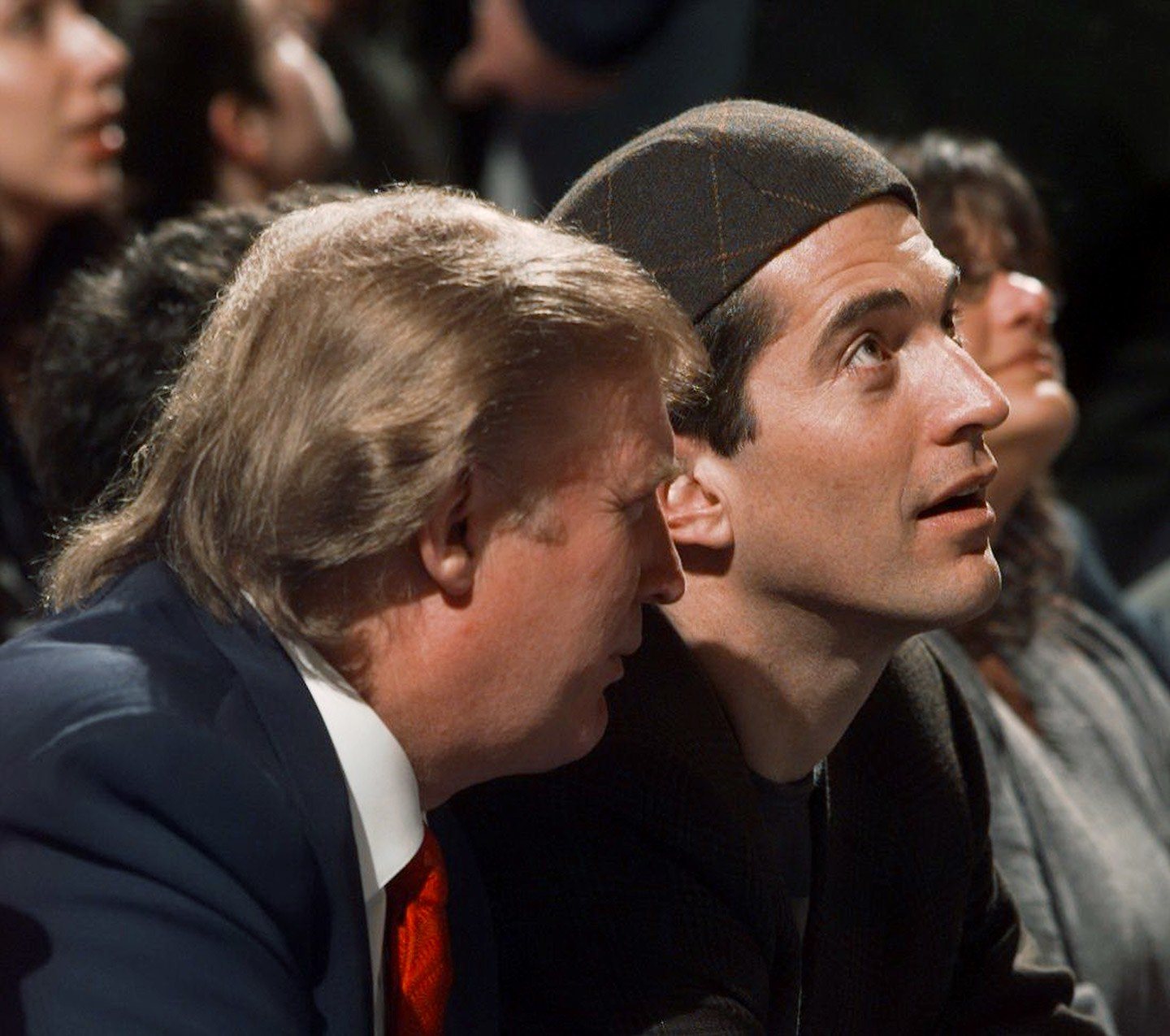 Trump with the John F. Kennedy Jr. at a 1999 New York Knicks game. Observe how the businessman’s hair breaks over his collar like a viscous, bird-killing oil slick. Why is J.F.K. Jr. the one wearing a hat?

Also notice the color of Trump’s hair above…because by the next year, look what happens: 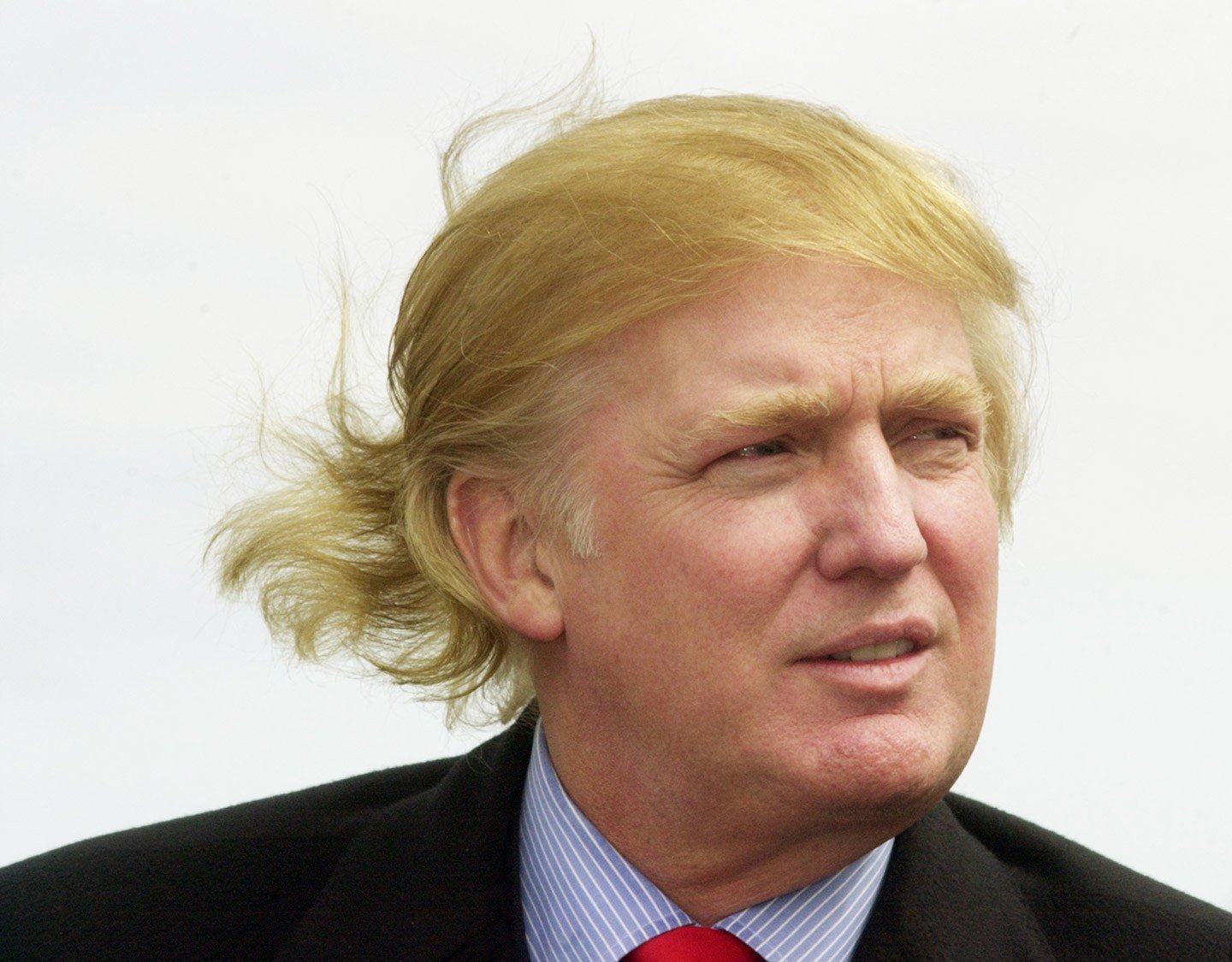 Trump at an outdoor event in around 2000, after ordering his stylist to color his hair and eyebrows a then-chic shade known as “Cigar-Stained-Teeth Blonde.” Tellingly, the wind affects but a single quadrant of Trump’s hair, as if the rest were bolted down like a storm cellar door. 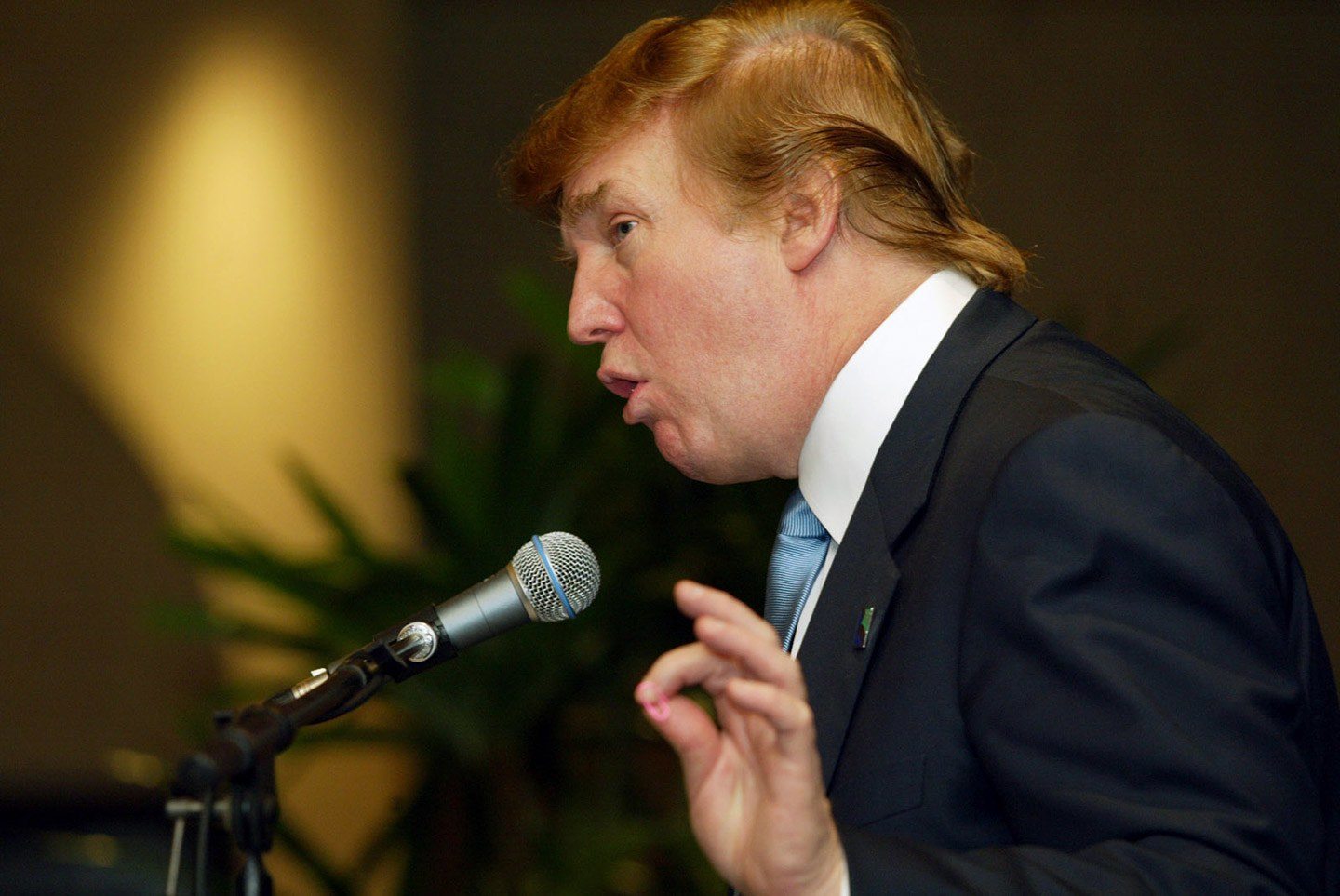 In this 2002 photograph, Trump has changed his hair color to “Burnt-Cheetos Auburn.” As well, the conventional hairsprays and salon products of years past appear to have given way to rubber cement and snot. 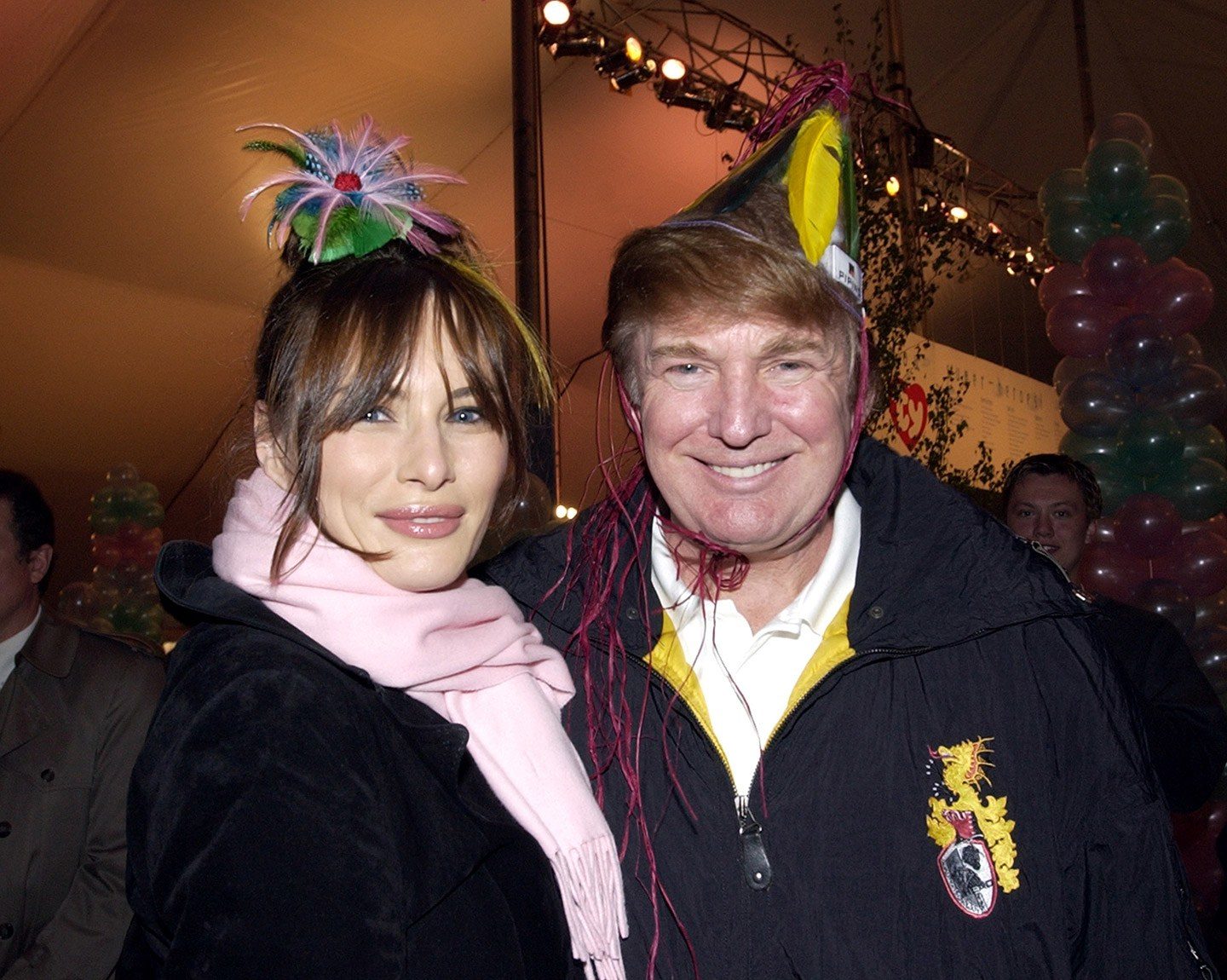 Unlike her husband, the third Mrs. Trump, Melania Knauss, is comfortable enough in her femininity to show off her normal but comparatively high hairline in this 2002 photo. 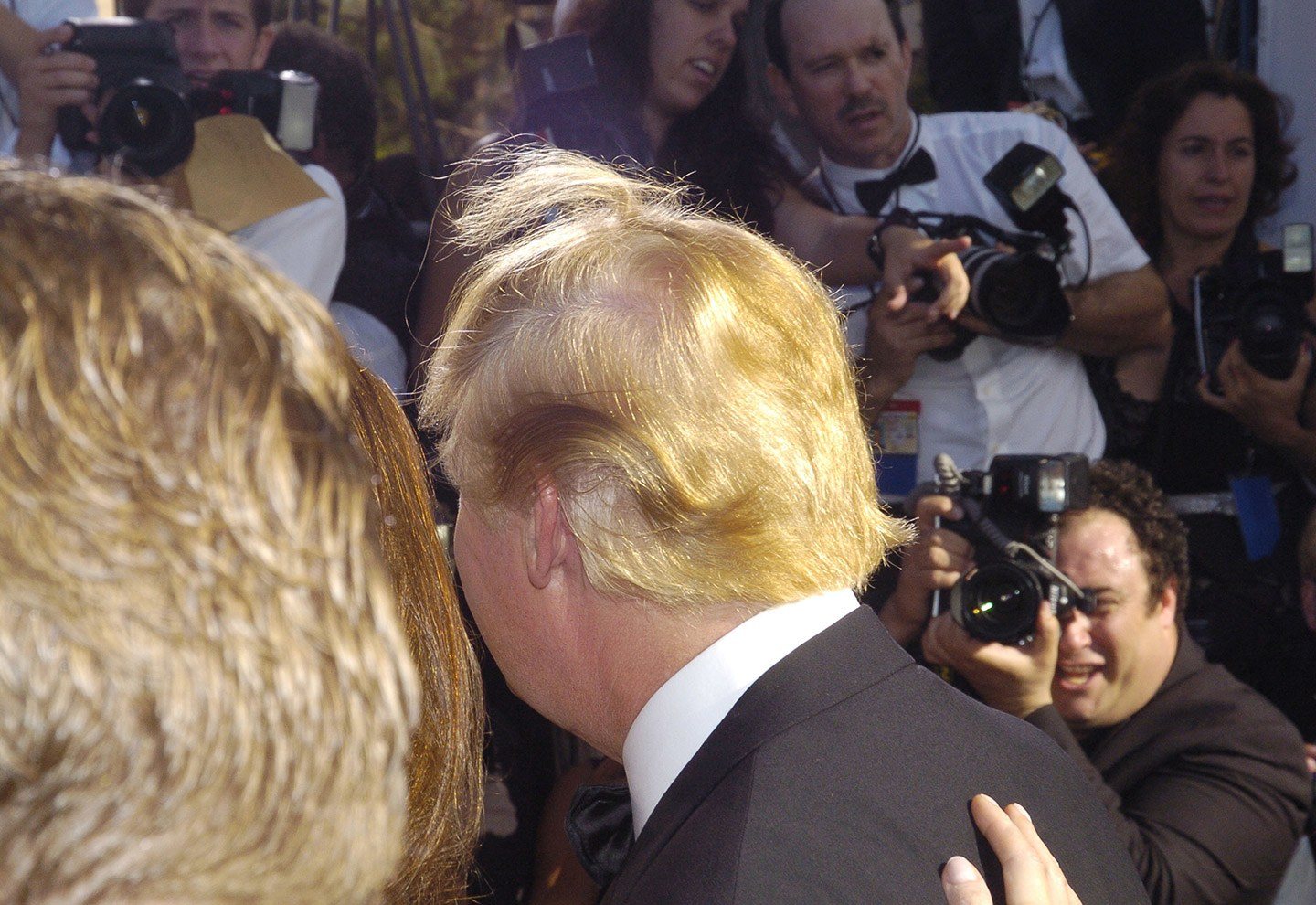 Trump at the 2004 Emmys. And nows it back to the golden hue we have grown to hate.

And we aren’t the only ones who tease Donald for his hair. His own daughter, his beloved Ivanka, mocks his hair as well.

Ivanka Trump reportedly tells friends that the orange-blond color comes from a dye product called Just for Men, which can be shampooed or combed in to mask gray hair.

The dye makes the hair darker the longer it’s left in — about five minutes, according to the product’s website — but Trump’s impatience results in the unusual orange-y tone.

According to Michael Wolff’s “Fire and Fury: Inside the Trump White House,” Trump received a scalp-reduction surgery and uses an elaborate combing method to achieve the folded look:

“An absolutely clean pate — a contained island after scalp-reduction surgery — surrounded by a furry circle of hair around the sides and front, from which all ends are drawn up to meet in the center and then swept back and secured by a stiffening spray.”

And Trump has also been known to use other products, such as bobby pins.

Back in September 2016, before we knew what hell Trump would bring to our lives, he was caught in Mexico wearing bobby pins to keep his hair in place.

I wonder if Pena Nieto can see the bobby pin in Trump's hair #TrumpEnMexico pic.twitter.com/LMjwCLtWJ3

Then there was this time back in 2015 when Trump was spotted with what appears to be a hair weave: 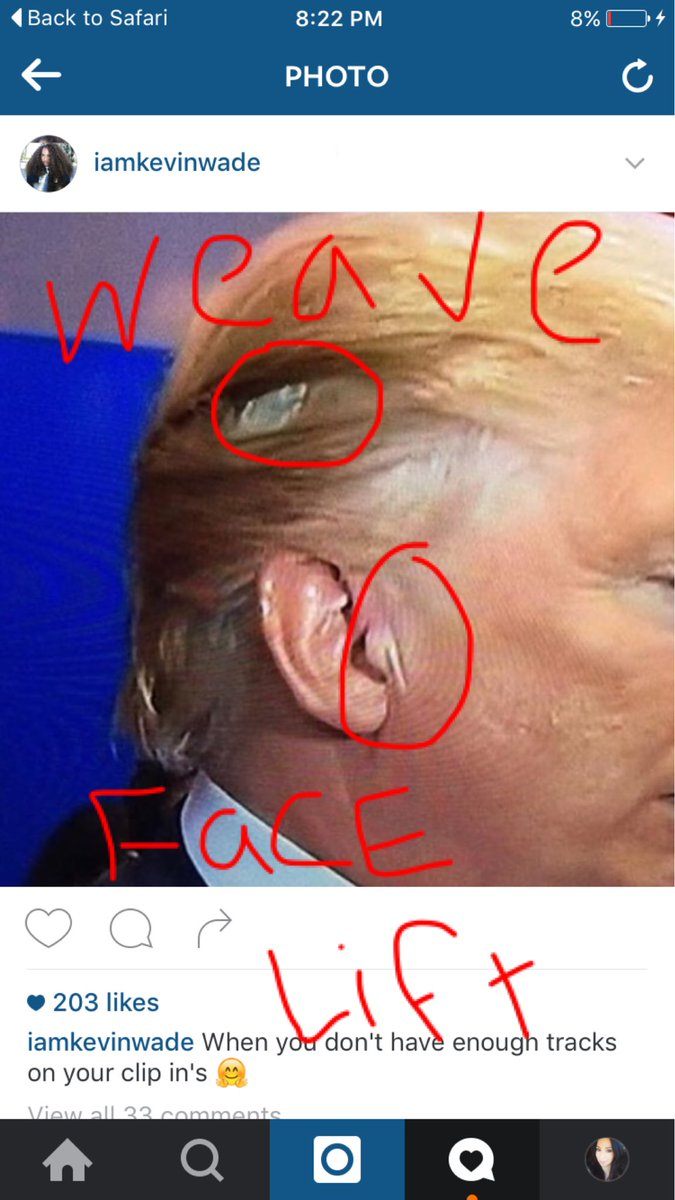 And through all of this, remember that Trump thinks his hair looks amazing. Just a week ago, when a photo of Trump’s makeup looking horrible surfaced, he claimed the photo was photoshopped, but commented that his hair still looked good.

⁦@realDonaldTrump⁩ returns to the White House from Charlotte, North Carolina. Photo by William Moon at the South Lawn of the White House on February 7, 2020 pic.twitter.com/n1a1Z93LrJ

More Fake News. This was photoshopped, obviously, but the wind was strong and the hair looks good? Anything to demean! https://t.co/t8ptYMCYHf

Trump Says Melania Believes He’s the Most Handsome President Ever, More Attractive Than JFK Even

That Woman Who Said Trump Has a Great Smile at the Town Hall? She’s Voting for Joe Biden