Most of us probably went through the entirety of Obama’s presidency without having seen Barack Obama’s signature, or at least not being able to picture it in our heads. To be sure, it has a lot to do with the fact that when Obama signed something he signed it and stood up to shake the hands of the people who worked hard on whatever the law or order it might be, like an adult serious about the work and its impact on people. Obama did not promptly lift up the order to show everyone that yes – his very important signature – is on the document in the right place.

Donald Trump, on the other hand, humiliated himself in his first days in office by lifting the order and showing it around the room, like a kid who got an “A” on their homework. Trump couldn’t help himself. He was so impressed with the fact that his very own signature meant something he couldn’t help but lift it up for the world; “See? See how important my signature is?”

So we all became very familiar with Trump’s signature style. Trump’s style evokes the warmth of an EEG pattern or a graph of gamma waves. All narrow short points, straight-up, like his fingers, given the descriptions we’ve heard.

But now look at Melania’s signature.

For reasons that only forensic hand-writing experts understand, we’ve all known since about fourth grade that boys/men write with straighter lines, harder edges, and girls/women write in shapes of contorted balloons. When certain men, ahem, cough, have handwriting that conjures the usual woman’s style, all curves, swirls, and grace, and a signature to match we (I mean “they”) are told that they’re very right-brained, in tune with their creative side.

Melania is one hard woman. No balloon letters for her, no hearts replacing dots on top of “i’s” (forgive me, some of us have 12-year-old daughters), no bunny whiskers at the ends of sentences. Melania has made it her life’s work to never smile, you think her handwriting would have a warm curve in it? She has used curves plenty in her life thank you and won’t be showing them in public for free!

@flotus
Dear Melania,
Thank you for your sweet note.
It is heartwarming to see you
manage your position with such beauty and grace.
Pamela pic.twitter.com/h9mmdqxp0h

So, her signature fits her personality to a “T.”

But, of course, all that assumes it’s actually her signature, or her signing it. It sure looks like she simply copied Trump’s. We are talking about a woman who still speaks halting English. Slovenia uses different letters and a slightly different alphabet. If she can barely speak English, why wouldn’t she copy Trump’s signature? 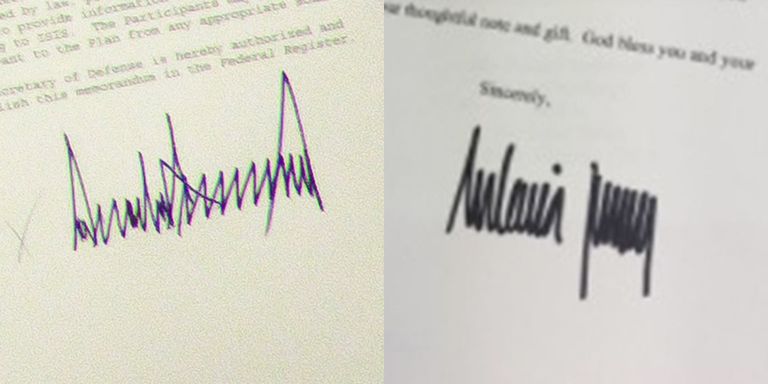 But even if she wanted to copy Trump’s, could she copy it that well? We have not known Melania to do anything well (though, copying others is probably the closest). We presume she has talents that she unleashes in certain highly isolated situations. So why would anyone think that she could be such an accomplished “copier” of signatures?

What if Trump signed her name originally – to give it the right Trump “pizazz” – and then had a stamp made for Melania to use?  According to Yahoo handwriting analyst Shelia Kurtz:

Hers looks just like his, which is absolutely amazing,

This is stylized. Maybe they brought someone in to show her how to do it or [it’s] a stamp, but it is definitely stylized.

In describing Donald’s signature, she said:

When someone writes, and you can’t really read what they’re writing, they don’t want you to read them at all.

The first letter, where it goes up into a point, that’s pretty sharp and direct and gets right to it. The downstrokes — those two lines in her last name — those are very sharp.

The experts wouldn’t opine on whether the same person developed Melania’s signature. We are willing to bet (without facts) that Trump “told” or “showed” Melania how she would sign things and if she wasn’t able to manage it, just bought her a stamp.

Such things are very important to Trump, he likes to show off those points stretched straight up, yearning to get straighter. Amazing that Melania’s signature isn’t all cold right angles, all geometry and right-triangles, precise, efficient, not a wasted effort, calculated to use the least amount of emotion, personality … just enough to get the job done and get out.

And of course, we know how much Melania likes to copy others:

UPDATED: Rudy Giuliani Appears to Fondle Himself in Front of Young Actress in New Borat Movie He Believed Was Real at the Time