As the wife of Supreme Court Justice Clarence Thomas, Ginni Thomas has more than 10,000 followers on Facebook and she’s currently using that page to hype unsubstantiated claims of corruption by Joe Biden, The Independent reports. She’s uber-conservative and on Monday asked her followers to think about sharing a link focused on alleged corruption by Biden and his son Hunter as well as claims purporting social media companies are censoring reports on the Biden family.

While other spouses of the justices have their own professions, Thomas’s is the only spouse involved in partisan politics and you might think this conflicts with her husband’s job, but Clarence Thomas, the longest-serving current justice apparently doesn’t think so. Appointed to the court in 1991, Thomas delivered the oath at the swearing-in of Justice Amy Coney Barrett Monday evening. Republicans made sure to rush her confirmation through to ensure conservatives enjoy a 6-3 court majority before the election.

The couple was on hand for a private ceremony at the Court Tuesday, where everyone involved wore masks.

Ginni Thomas is a huge supporter of President Donald Trump and was a delegate to the Republican National Convention, in Charlotte, North Carolina earlier this summer.

She regularly uses her Facebook page to spread conspiracy theories including one that features Trump attorney Rudy Giuliani, accompanied by the headline, “The Biden Crime Family: How They Made Millions.” She encouraged her followers to share the link and noted “The mainstream media does not want people the facts of what this video reveal [sic].” 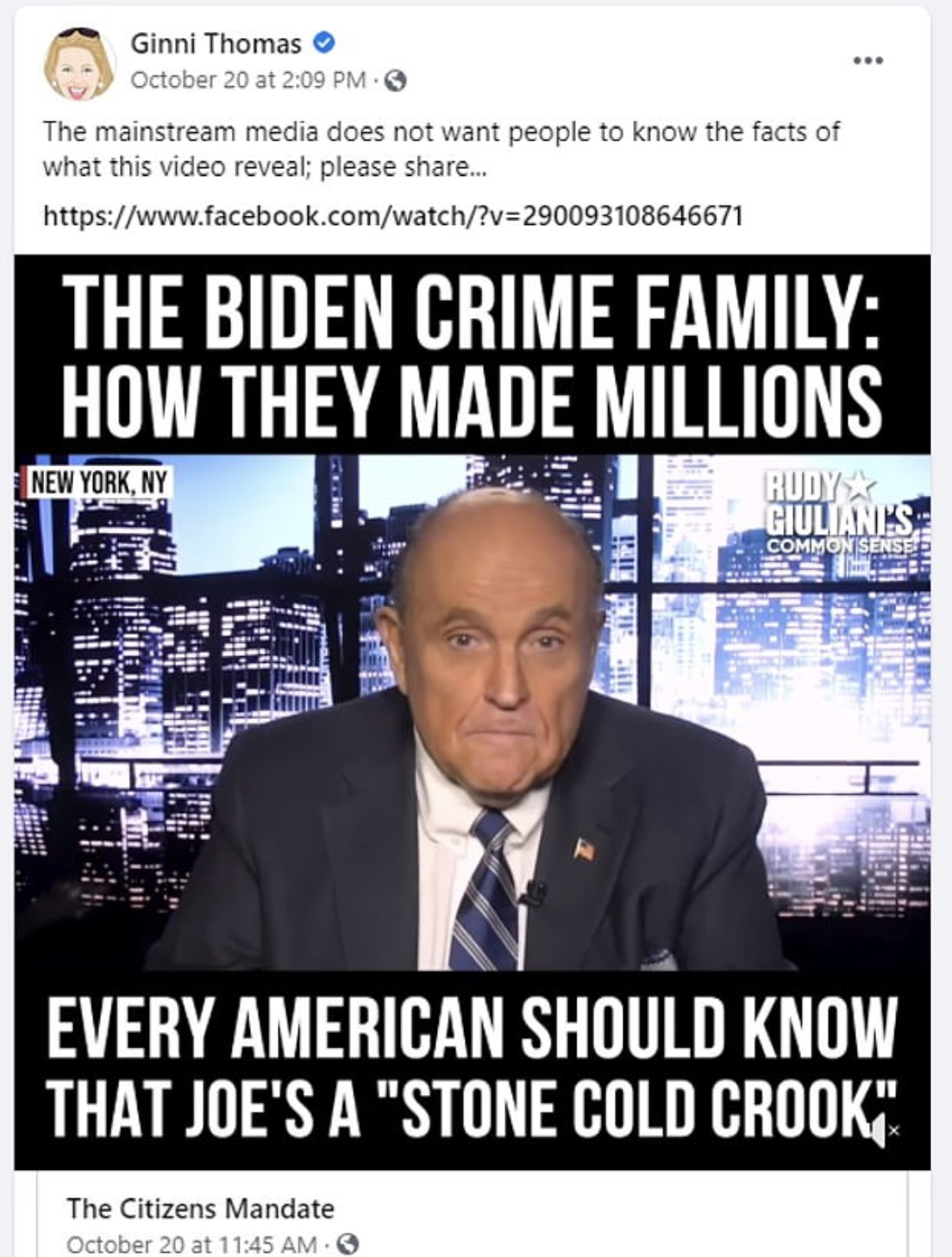 Like so many conspiracy theorists before her, she has it in for George Soros, although what the billionaire philanthropist has done to inflame so many of these nutters is beyond me. Nevertheless, earlier this month she pointed her followers to a link with the headline “Who is really running the Democrat Party? The Soros family.” The story featured photos of Soros’s relationships with House Speaker Nancy Pelosi, Hillary Clinton, and Democratic vice presidential contender Kamala Harris. 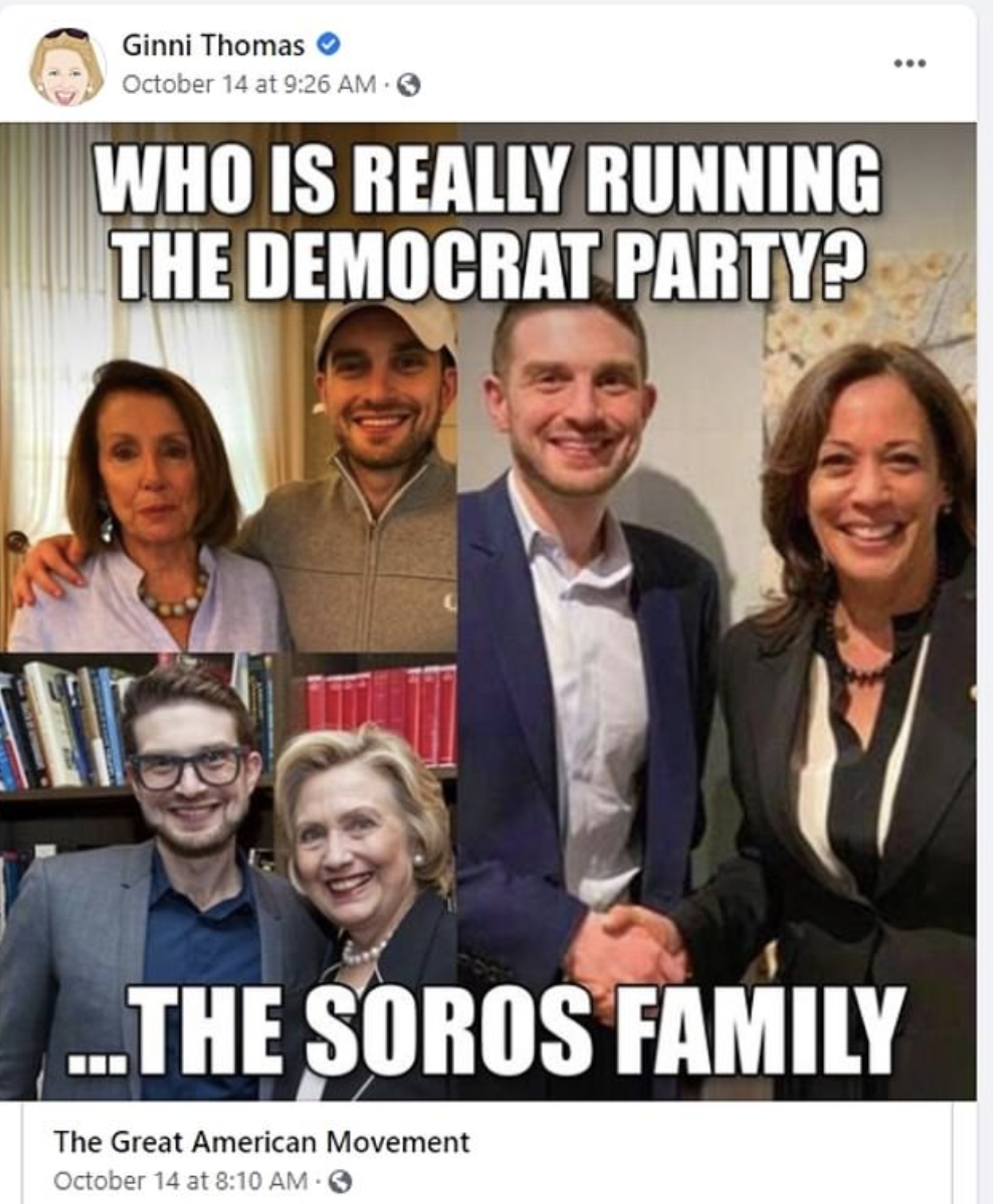 Thomas loves to attack “the left” and “the media” and on October 17 posted a photo of a Black man identified as a conservative who was protesting outside Twitter’s San Francisco offices. The man has a bloodied mouth and missing teeth which led Thomas to write “Why is the left violent and why don’t Democrat’s [sic] condemn this?”

Right before that, she was complaining about the supposed collusion between the media and the Biden campaign and the purported efforts to shield Biden against tough questions. 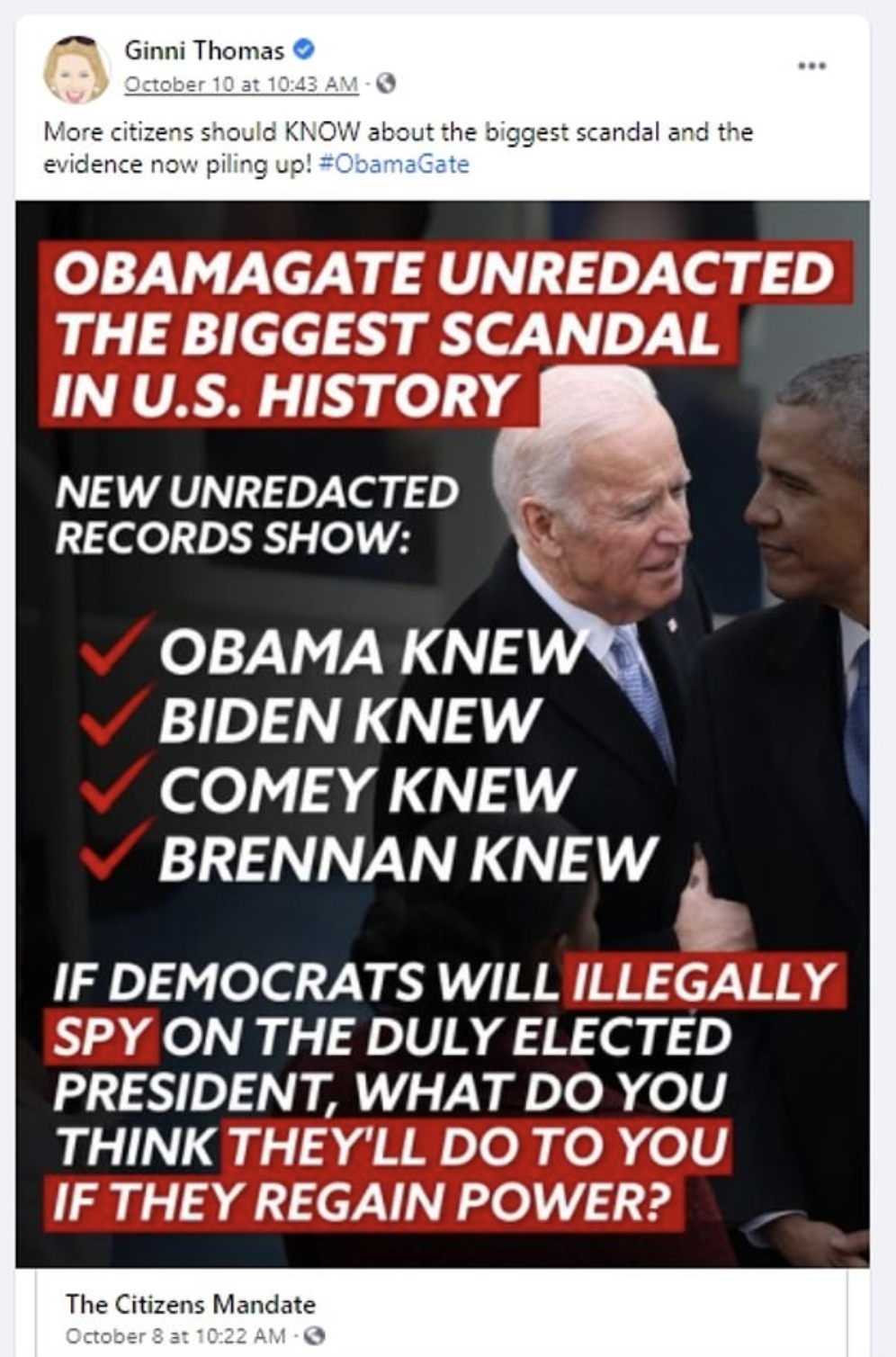