We have said this any number of times but it’s no secret that of the 20 Republicans on that stage when they first debated back in 2015, the Republicans ended up electing the dumbest, and that’s not hyperbole. Who the hell else could have fallen for a parody account of his 78-year-old sister Elizabeth Trump, who basically never says anything in public, perhaps worried that the more she speaks, the more people will look into her past. Trump even went so far as to thank her for congratulating him, despite the fact that she didn’t.

The account that so easily took Trump for a ride? @TheBettyTrump, which sounds like the Twitter handle of a 20-year ex-federal district judge whose brother is president, right? Exactly. The account is not run by Elizabeth Trump, though it posted a statement Wednesday claiming that she was ready to break her silence following the election. (Federal District judges, even retired ones, are known to forever be on Twitter giving their opinions on legal shit, it’s just a thing, crazy kids). The Tweet:

This election inspired me to break my silence and speak out on behalf of my family. My brother Don won this election and will fight this to the very end. We’ve always been a family of fighters. We are all so very proud of him and the job he has done for our country. 4 MORE YEARS! 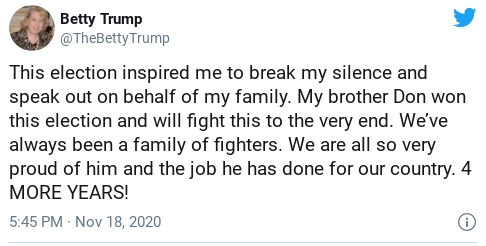 Presumably unaware that the account was run by someone other than the president’s sister, conservative podcast host Wayne Dupree wrote an article regarding the account, claiming that the post “proves how much she believes in her brother.”

So Biff, dumb as ever (actually, noticeably dumber than even five years ago), jumps on it:

Dumbass. And he wonders why his administration cratered and he’s on his way out the door.

Ivanka Trump Throws Tantrum and Claims She’s Being Harassed by NYC DA’s Office, ‘They are Ruthless!’